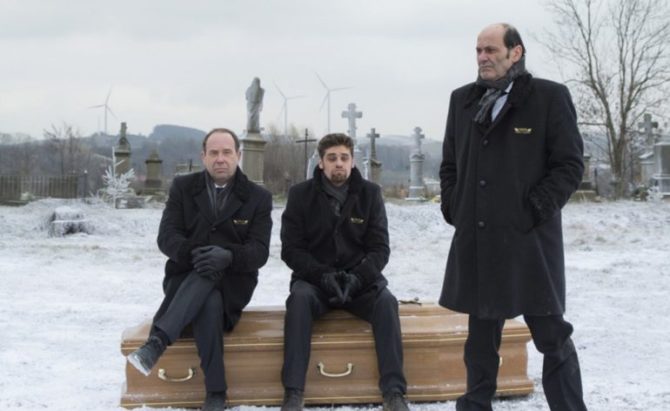 In a small godforsaken backwater, Edmond Zweck’s funeral parlour is, ironically, clawing at death’s door; thanks in part to a devil-may-care generation too busy living to plan, and crucially pre-pay, for their send-off from this mortal coil. While Zweck racks his brain to drum up business, chiefly by sending his right-hand man Georges on recce missions to the local GP to gauge villagers’ state of (un)health, his bumbling apprentice Eddy – who makes no secret of the fact “death bums [him] out” – is left manning the store. This mainly involves fobbing off the funeral home’s sole and rather hard-to-shake ‘customer’, Madame Cisca, a lonely widow who treats the undertakers’ like a one-stop shop and sweet-talks kind-hearted Eddy into giving her anything from check-ups to the occasional hair trim!

But luck smiles upon Monsieur Zweck at last. One fateful day, a grieving widow comes a-knocking, charging the bumbling trio with her late husband’s burial. So far so good. Except that the cortège gets split up mid-transit by blinding fog, leaving the bereaved relatives, priest and a couple of choir boys stranded on a frozen lake, and throwing the funeral – and cinder-black comedy – on a frankly surreal course.

Cue an ill-timed resurrection, a peripatetic corpse and the most bizarre (and presumably only) hearse chase in the history of the silver screen. Midway between broody film noir and jacked-up farce, with a tinge of the supernatural, Pautonnier’s screwball debut is one vertiginous (and oh-so irreverent) flight of fancy. Brace yourself for the deliriously chaotic finale…