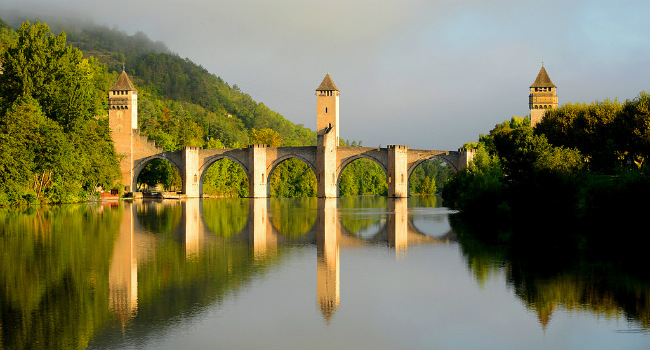 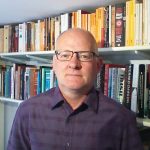 Cahors is one of south-west France’s most unspoilt ancient towns. Formerly the capital of the old province of Quercy, the town perches dramatically on a rocky peninsula on a series of horse-shoe bends along the languid river Lot which is the longest river in south-west France. It is overlooked to the south-east by Mont Saint-Cyr which can be accessed on foot or by car and affords spectacular views over Cahors and the Lot River.

Cahors is famous, among other things, for its “black” wine: appellation d’origine contrôlée  (AOC) Cahors wine which is made with at least 70% of Malbec grapes and supplemented with Merlot and Tannat grapes. This typically darkly-coloured wine is known locally as “Cot”, “Cot Noir” and “Auxerrois” and is, interestingly, the only red-wine appellation in the south west of France to use neither Cabernet Sauvignon nor Cabernet-France grapes.

In Gallo-Roman times Cahors was known as Divona Cadurcorum after a Celtic goddess who lived in a natural spring grotto and was worshipped by the Cadurce who were among the last of the tribes of to be overcome by the Romans in around 50BC. The inhabitants of Cahors are still known as Cadureciens (females, Cardurciennes) which is a demonym derived from the old Celtic tribe. The spring is known now as La Fontaine des Chartreux and it still supplies the town’s water.

Historically Cahors was once an early centre for banking and was synonymous with the sin of usury (lending money with interest) and referenced in Dante’s Inferno in his explanation of sins punished in the seventh circle of hell along with blasphemers:

And for this reason doth the smallest round
Seal with its signet Sodom and Cahors
And who, disdaining God, speaks from the heart

The phrase “he is from Cahors” was intended to be derogatory and meant that a person was a usurer. 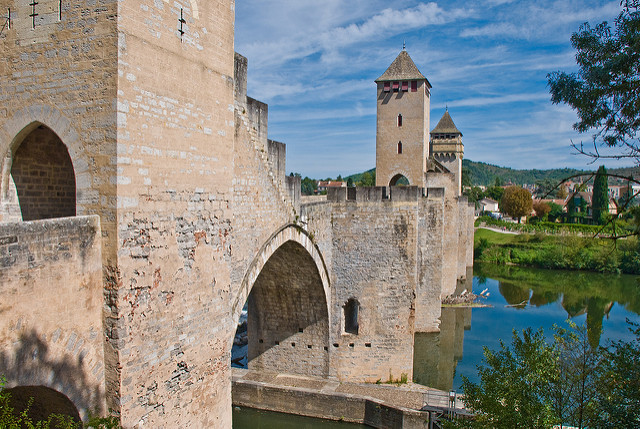 The finest medieval fortified bridge in France the Pont Valentré, which is a UNESCO World heritage site, spans the river and is claimed to be one of the most photographed monuments in the whole of France. (Photos are best taken at the end of the lock beside the road.) It is often referred to as the Devil’s Bridge which is a term applied to many ancient bridges, found primarily in Europe – mostly constructed of stone or masonry arch bridges and which invariably represent a significant technological advancement in its construction. Each of the Devil’s Bridges has a corresponding Devil-related myth or folktale attached to it. Often the bridge builder and the Devil are adversaries which reflect the fact that these new constructions were frequently built under challenging conditions which required heroic efforts on the part of the builders and the community. Other legends feature someone who makes a pact with the Devil and the Devil then agrees to build the bridge in return for the first soul to cross the bridge. Invariably the Devil is outwitted after the completion of the bridge, for example by luring an animal to cross it first. When the Pont Valentré was restored in 1879, Paul Gout, the architect, mischievously placed a small sculpture of the Devil at the summit of one of the three machiocolated towers. 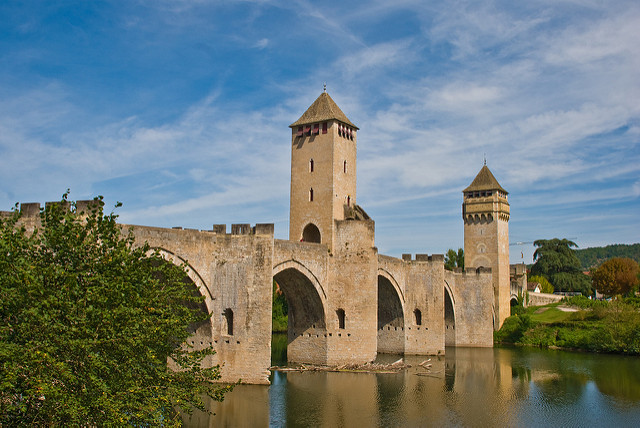 The Boulevard Gambetta, constructed in the 19th century, follows the direction of the moat which once surrounded the original town’s fortifications, with its iconic plane trees, cafés and shops neatly and architecturally dividing the Vieux Cahor (old Cahors) to the east and the new Cahors to the west. It is named, as many streets are in France, after the republican statesman Léon Gambetta who was born in the city in 1838, the son of a grocer from Genoa. Gambetta helped direct the defence of France during the Franco-German war of 1870-71 and was a founding father of the Third Republic. He was briefly the Premier of France. Gambetta was described as being fat, badly groomed with a dishevelled beard and was known for his natural warmth, generosity and liberalism which made him highly popular. Tragically, while handling a revolver, Gambetta shot himself in the arm, and as his health was generally poor, the wound healed slowly. During his convalescence he suffered appendicitis but his doctors did not operate and he died on December 31, 1882, aged 44.

Just west of Boulevard Gambetta are the remains of a Roman Amphitheatre which was uncovered during work to create an underground car park at Place Gambetta. 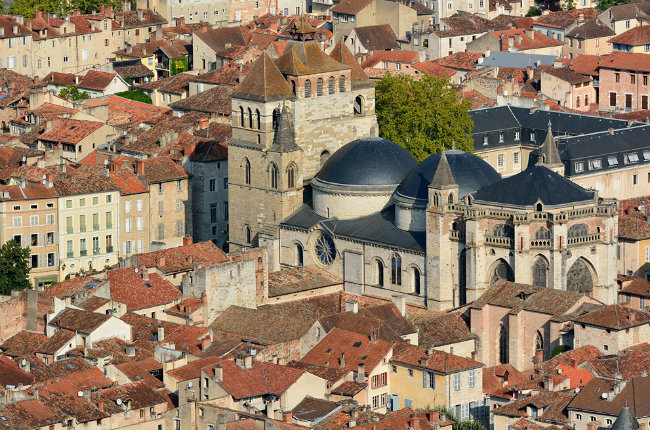 Looming over the main town square, behind the narrow streets of the old quarter, is the Cathédrale Saint-Étienne– listed as a UNESCO World Heritage site, and part of the Santiago de Compestela pilgrimage route (also known as Saint-Jacques-de-Compostelle). It is a splendid example of late Romanesque and Gothic architecture. It was built by Bishop Gerard de Cardaillac on the site of an early church constructed in the eleventh century and consecrated by Pope Calixtus II in 1119, known for his Papal bull Etsi Judaeis which gave protection to Roman Jews. The façade has the appearance of a fortified building. The nave is covered by two domes, the largest found in the south west, which is made possible, architecturally, by the use of pendentives, supported by six huge pilasters which allow a circular dome to be placed over a square room or an elliptical dome over a rectangular room. One of the domes is decorated with fourteenth century frescoes depicting the stoning of St Stephen, the first Christin martyr, as well as eight prophets, each riding an animal in the fashion of the Greek or Hindu deities.

The stained glass windows– installed in June 2013 and designed by Gerard Collin-Thiebaut in collaboration with the glazier Pierre-Alain Parot– are worth the visit on their own. Each window is composed of old pictures or more recent pictures which are intended to replicate how art and faith is passed down through the ages. The Good Samaritan window is a good example of this. It is made up of three elements: a sixteenth century picture by the Italian artist Jacopo Bassano, considered to be the first modern landscape painter, where the Good Samaritan looks compassionately at the victim; a nineteenth century picture by Aime Morot, a French painter and sculptor of the Academic Art style, where the Good Samaritan is active and carries on his shoulder the misfortune and misery of his neighbour who has been stripped of everything he possesses; and a photograph of Place Jean Jacques Chapou (the square situated in front of the cathedral) which is intended to remind us all that the love of one’s neighbour is still, or ought to be, an important teaching and obligation even in our increasingly secularised society.

In the flamboyant Gothic-style cloister, built in 1504, a plaque on the wall caught my attention and provoked some intense reflection: 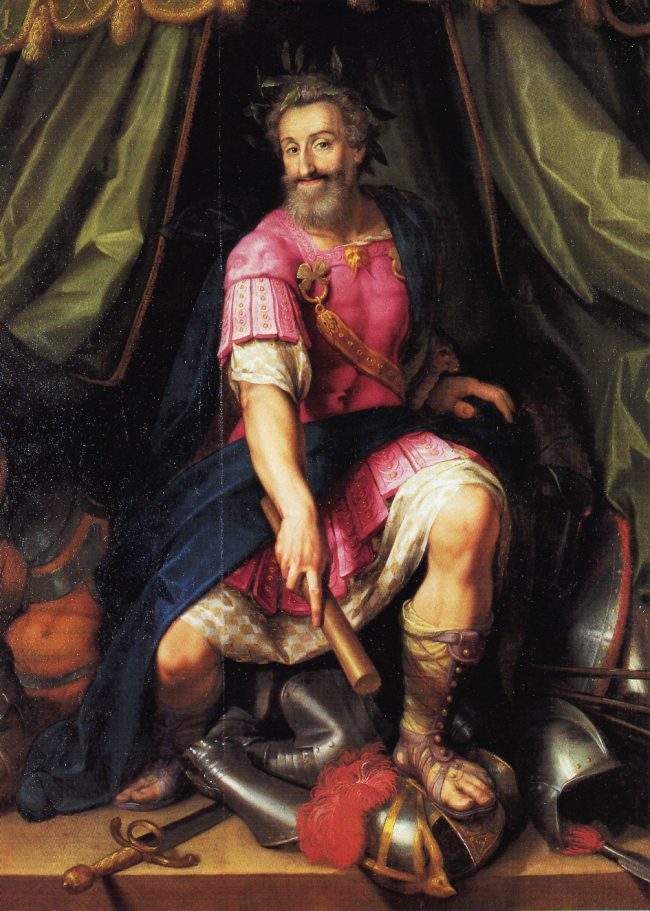 Also worth seeing in the old quarter is the sixteenth century Maison de Roaldes where Henri of Navarre, who later became King Henri IV, reputedly, spent a night in 1580, after besieging and capturing Cahors during the War of Religions.

One of the least known facts about Cahors is that it was the first official global city of the Mondialist pacifist movement. Cahors-Mundi, as it was known, was intended to free people from ultra-nationalist impulses and shackles. The movement was the brainchild of Garry Davies, a Broadway actor and former soldier who declared himself to be a “citizen of the world” and gave up his passport and lived without any personal identification apart from a “symbolic” passport which he had printed himself. The passports are still in use today and some 200,000 people currently continue to describe themselves as “citizens of the world” on the association’s register at its headquarters in Paris. Inspired by Davies, Robert Sarrazac, a former officer in the French army, wanted to create a network of cities, freed from the influences and government of their countries and he chose Cahors as his first city in this attempt to create a globalist utopia.

Cahors was also the birth place of Jacques Dueze, the son of a local shoe-maker, who later became Pope John XXII, the second and longest reigning of the Avignon Popes (1316-1334). It is also the place where the French actor and mime artist Marcel Marceau died.

An alternative way to enjoy the splendours of this stunning town is to take a leisurely boat trip, which lasts about 90 minutes, and departs from a wharf near the Pont Valentré.