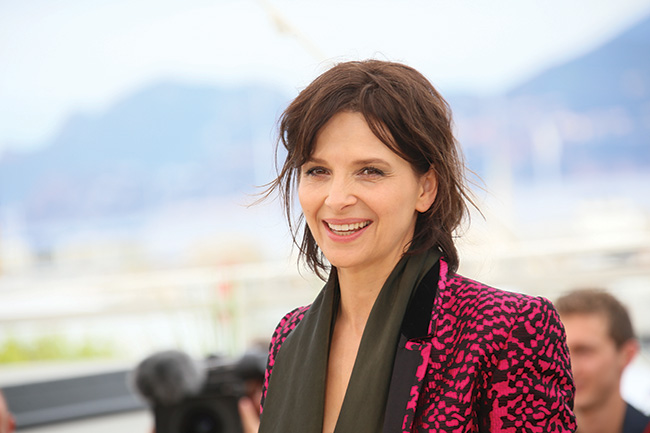 She must be one of the hardest-working actresses in France, with more than 60 films and numerous gongs (including an Oscar for The English Patient) under her belt – and there’s no sign that Juliette Binoche is letting up any time soon. Her new movie, Both Side of the Blade (Avec amour et acharnement), directed by Claire Denis, is just one of three that are imminent on our screens.

The film sees Binoche as Sara, a woman who is in love with two men: Jean, with whom she has been living for 10 years, and François, her ex and Jean’s former best friend, who she bumps into in the street one day. Director Denis said: “Juliette Binoche is capable of everything! Comedy, like in Let the Sunshine In, and here in Both Sides of the Blade, a sort of tragic gravitas. She is brave. She confronts everything head-on, stands up to any challenge. It’s not just show. It’s organic.”

Both Sides of the Pond

Born in Paris to a director/sculptor father and teacher/actress mother, Binoche’s parents split when she was four, and she and her sister were sent to boarding school. She began acting as a teenager and briefly attended the Conservatoire National Supérieur d’Art Dramatique. Her first role was in Jean-Luc Godard’s’ controversial Hail Mary (1985) but it was her performance in André Téchiné’s Rendez-vous the same year which won her proper attention when it scooped Best Director at Cannes.

Her English-language debut, The Unbearable Lightness of Being (1988), placed her firmly on the international stage. Krzysztof Kieslowski’s Three Colours: Blue (1993) won her critical acclaim and a César Award, as well as Venice’s Volpi Cup for Best Actress.

Then came her Oscar-winning performance in Anthony Minghella’s The English Patient (1996) opposite Ralph Fiennes. This was followed by another Oscar nomination for her role in romantic comedy Chocolat (2000) directed by Lasse Hallström and co-starring Johnny Depp. There are simply too many movies to mention, for over the past 20 years, she has worked tirelessly, splitting her career between France and Hollywood – she’s even found time to appear on the stage!

In recent years, some of her most notable films have been under the direction of Claire Denis. Un Beau Soleil Intérieur (Let the Sunshine In, 2017) sees Binoche play a middle-aged Parisian artist who is searching for true love and encounters many unsuitable men along the way. Then in 2018 she starred opposite Robert Pattinson in the sci-fi thriller High Life. And it won’t be long before see her again…

Binoche was a late starter, not taking up acting until she was a teenager. She attended the Conservatoire National Supérieur d’Art Dramatique but dropped out.

I know the face…

You certainly should! She has appeared in more than 60 movies, including plenty in English, from 1988’s The Unbearable Lightness of Being to 2018’s High Life.

Where will we see her next?
Binoche’s next movie is Claire Denis’ Both Sides of the Blade. Then Winter Boy, directed by Christophe Honoré, will be released at the end of November. In it she plays a mother whose teenage son is on the cusp of moving to Paris until his world is suddenly shattered. And then there’s Tran Anh Hung’s The Pot au Feu, which is still in production. It’s a historical romantic drama set in 1885 which portrays the romance between a cook and the gourmet she works for.

Steven Spielberg offered her roles in Jurassic Park and Schindler’s List but she turned them both down.