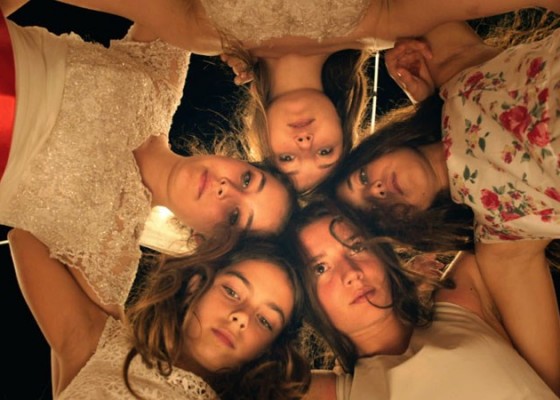 Mustang is the perfect name for France’s Oscar nomination. It’s about five young girls who break a lot of rules, from marriage contracts to learning how to drive a car.

It also breaks these rules: the movie about five orphaned sisters was filmed and set in a Turkish village on the Black Sea; the stars are Turkish actresses; the director is a first-time director who is Turkish, although she was raised in Paris; and the language is Turkish.

The French are so proud of their language that they have guardians at the Académie Française to manage and enforce it. Then how did Mustang become the French film nomination in this year’s Oscar category of Best Foreign Language Film? Shouldn’t the language be French?

Part of the answer is that the director grew up in France. Deniz Gamez Ergüven was the daughter of a Turkish diplomat. Born in Turkey, she spent nearly her first decade of life in Paris. The family went back to Turkey, then a few years later, Ergüven’s mother and sister returned to France. She considers herself a French director. So does France.

“When I finished this film, it was completely embraced by France,” said Ergüven in a November 2015 interview in Vogue.“In some way it’s a very radical and modern choice. It’s a way of saying: We are this diverse. It’s a way of embracing me as French with different origins, accepting the complexity of my culture and my identity. It’s a statement that says: We have absorbed many different cultures in France today. It’s a huge responsibility. France has given me this immense honor.” But it is also about the huge “film track” that Mustang has earned. According to Laurence Mazouni, Filmmaker, Curator and Instructor at Alliance Française de San Francisco’s “History of French Cinema” class, the film that is presented to the Academy must be popular on the film festival circuit. To date, Mustang has won 11 awards, including the Europa Cinemas Label at Cannes; Best Film, First Film, Promising Actresses, and Cinematography at the Lumières Awards; the LUX Prize and the Grand Prix at Odessa International Film Festival. It received 14 nominations and there are 12 awards, including the Oscar, that are pending.

It was also the Official Selection at the Toronto, Chicago and Mill Valley (California) International Film Festivals.

“A film has to have sizzle,” said Mazouni, “and Mustang has that. It built up an amazing showing in all the big festivals. It has the strongest film track.”

Its film track beat out seasoned director Jacques Audiard’s Cannes Palme d’Or winner,Dheepan and Stéphane Brize’s The Measure of a Man to become France’s official entry at the Academy Awards.

“But there were many French government subsidy organizations that funded this movie,” said Mazouni. “The support for this film was amazing, and very prestigious.”

But the French ultimately chose story over language. It’s a tale of the sisters who innocently frolic with fellow students, including boys, the last day of school and are forced to live with the consequences in a conservative society. Their grandmother and uncle, with whom they are living, basically lock them in their home and train them to be proper wives. The grandmother begins marrying the sisters off to strangers who she assures them they will “learn to love.”

“What is great about this film is that is about the freedom of women,” said Mazouni. “It starts so well on a beautiful beach with the kids in school uniforms. It could be anywhere in the world. But that scene sets the tone of what’s to come.”

“Everything changed in the blink of an eye,” said Lale, the youngest sister.

The girl’s resist, but do it in spirited, honest and clever ways. This is not a film about girl hormones driving the story, nor of religion, but of each woman/girl’s resistance to the conservative culture forced on them. Each girl reacts differently, true to herself. But they each act with the confidence and courage to design their own journey in multi-cultural Turkey.

“In 2016, it’s possible to have a melting pot of many cultures in France and many countries,” said Mazouni. “That diversity plays in the film industry. We are a big, huge family and everyone good wants to work with everyone else that’s good. Part of the attraction of this story was the diversity story coming from a French director.”

France’s film offers to the Academy have been spurned for five years. The last French film nominated was 2009’s A Prophet.  Mustang is considered to be the dark horse candidate against the frontrunner Son of Saul from Hungry.

But win or lose, the story of these five women reflects the mustang of the American West– the horse who was known for its unbreakable spirit and grit; or perhaps Marianne who raised her banner above the bloody battlefield to encourage French fighters. Each sister’s story is about freedom.

The Academy Awards will be announced on Sunday, February 28, 2016.

Previous Article Cassis and the Calanques: Exploring France’s Mediterranean Coast
Next Article Now at The Getty: The Romance of Black in 19th Century French Drawings