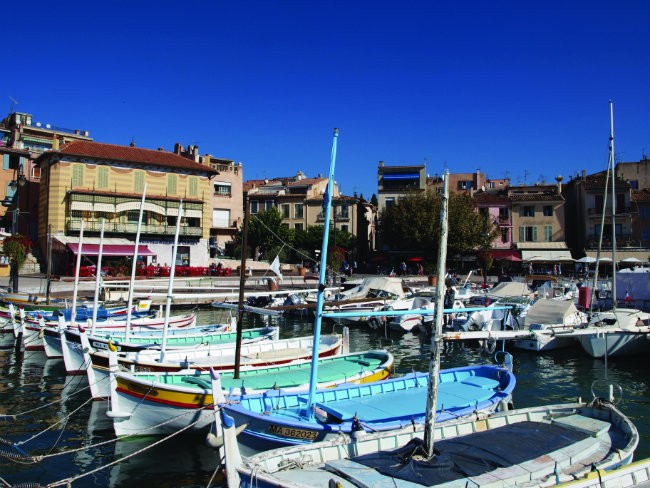 As I walked down the hillside into the backstreets of Cassis, there was no sign of the autumn mists and torrential rains which had struck Provence during the previous days. In the distance, the sea sparkled under the bright Mediterranean sun and the rain had washed the air so that everything was sharp and the colours were vibrant.

It was my first visit to this popular port. The day before, while holed up in a hotel room, escaping le déluge, I’d read about Frédéric Mistral, the winner of the 1904 Nobel prize for literature – a lawyer, writer and lifelong champion of an independent Provençal culture and language. Mistral is quoted as saying “Qu’a vist París e non Cassís a ren vist”. That’s the Langue d’Oc, the Occitan language and it means “He who has seen Paris and not Cassis has seen nothing”. It seemed like quite some claim when you consider the many delightful villages and towns along this famous coastline so I was curious to find out more…

Cassis sits in a gloriously sheltered bay with the protective Cape Canaille on one wing and the Massif of the Calanques, stretching west nearly all the way to Marseille, on the other. The gentle hillside behind the port means that the October sunshine felt warm even at 10am. I as meandered into the Place Baragnon, the twice-weekly market was on and the stall-holders had set out their wares under the dappled light of plane trees, their leaves turning golden before the harsh winter pruning.

Local jams, olives, basketware, straw hats, Provençal soaps, sun-dried tomatoes and mouth-watering artisanal breads competed with the fresh vegetables and fruits, and the stalls were all immaculately presented, often decorated with huge sunflower heads. With the bad weather over, the locals were out in force, chatting and buying up provisions for lunch and dinner. The crisp local white limestone provided a dramatic backdrop for the vivid colours of the market. You realise that, in Cassis, this stone is everywhere– it’s under your feet, in the quoins of the buildings and the old walls, and even the Pierre Baragnon memorial fountain at the city’s heart is carved out of the same material.

In fact, you don’t have to go far back in history to discover that the white limestone of the Calanques region has been the economic as well as the physical bedrock of the area. In places, the rock is 400 metres thick, creating an almost infinite precious resource for man. Over the centuries, it’s been quarried extensively and provided the material to erect grand buildings throughout the Mediterranean and further afield, including Marseilles’ cathedral Notre-Dame de la Garde and Hôtel de la Préfecture, and the quays of Alexandria and Port Said. It’s also been claimed – less reliably – that the region’s limestone forms parts of base of the Statue of Liberty. Later, on a boat-trip from the harbour, the remains of old stone quays once used for loading the stone onto transport ships provide evidence of the area’s historic workings.

Down to the Sea

From the bustling market area, it’s a short stroll to the jewel of Cassis, the harbour – an intimate and picturesque crescent of colour-washed buildings, with jolly cafés and restaurants set on the quayside. Pause for a coffee and admire this fleet of local wooden fishing boats, known in the local dialect as ‘Pointu’, for their acute sterns. The day’s catch has been landed and sold, the boats washed down and now they nestle proudly together, with enough colours of cadmium yellow, white, cerulean blue and ochre to grace any Impressionist artist’s palette.

On the other side of the harbour, a flotilla of tour boats awaits and later I’m due on one of them to explore the coves of the Calanques. But for now it’s a simple pleasure to soak up the late-season sun and the ambiance, watching local restauranteurs preparing tables for the midi meal, and tourists and holiday home-owners (the city’s very popular with wealthy Parisians) strolling along the quayside and enjoying the mellow micro-climate.

Further across the water, you gaze up at the ramparts and fortified walls of the Château de Cassis, whose walls skirt a prominent bluff above the harbour, a site chosen for defensive reasons during Roman times and subsequently re-built upon – layer after layer – through numerous historic wars and changes of patronage. The Château has been in private ownership for over 100 years and is now a small, rather stylish hotel – I’m saving up to take the tower suite on my next visit, as it offers magical views over the harbour.

Cassis is remarkably unspoilt, considering that our generation is hardly the first to appreciate its charms. Over the last century or so the city developed a loyal following, which has included the likes of Virginia Woolf and others in the Bloomsbury set (Vanessa Bell once said Cassis was “the Bloomsbury on the Mediterranean”), the painters Dufy, Signac and even Winston Churchill, who unpacked his easel here in the 1920s. No wonder, because Cassis’s atmosphere is beguiling and the quality of light is so special.

The Calanques by Boat

You could sit at one of the harbour-side restaurants savouring a glass of Bandol rosé, from vineyards which are just up the road, or stroll the quaint back-streets and while away many a pleasant hour. I was tempted to do so but noticed, from the corner of my eye, an increasing amount of activity on the far side of the harbour, from where the boats depart for the town’s most popular excursion. So I was obliged to escape my idle reverie because I was due aboard one of those boats, bound for the Calanques.

Soon we’re heading off, out of the tranquil calm of the harbour, past the white-stone lighthouse and into the light chop of the coastal waters, to tack in and out of the Calanques – the grand, fjord-like inlets cut into the limestone massif by many millennia of glacial erosion.

Try to take this trip on a sunny day, to appreciate the crystal-clear waters, which are a deep iridescent green that morphs to aquamarine, contrasting with the ragged white limestone cliffs that are dotted with Aleppo pines. The Port en Vau Calanque, one of the most beautiful, is deeply cut into the cliff faces, which feature dramatic examples of striation and needles of rock. The Calanque de Devenson features 300-metre-high cliffs with stone formations like organ pipes which descend into the deep, while the sheer face of the Calanque d’Oule boasts an effect reminiscent of the patterns of lace made by man yet, remarkably, they were carved from stone by natural forces.

This is a captivatingly beautiful landscape and the boat trip is a special way to see it up close. It’s strange to think that, beneath the rocks, hidden from our view, lie caves and pure-water underground rivers – for example, at the Cap Morgiou there’s an underground cave and lake with paintings and carvings which date back over 19,000 years.

There are a range of boat trips from Cassis, lasting from 45 minutes to approximately two hours – it’s a great way to appreciate the natural wonders of the coastline. If you like to hike, you can discover even more of the area’s grandeur on foot – in season, you could swim at some of the coves with beaches, such as the Calanque d’en Vau and the Calanque Port Pin. Be sure to follow the very strict codes for walkers, especially with regard to fires, which have been a major cause of destruction in the past. To help safeguard the environment, in 2012, some 158,000 hectares of the region officially became the Parc National des Calanques, the tenth largest designated area of its kind in France, and the third biggest national park in the world.

The beauty and bio-diversity of this region, with its rare birds, orchids and other flora and fauna, has long been appreciated by nature-lovers but it’s taken decades to establish the kind of official protection needed to prevent encroaching urbanisation and environmental misuse.

For the last 50 years, a part of the vast area near the coast has been successfully exploited for aluminium production by Alteo’s factory in Gardanne, which has been permitted to pipe waste by-products into the offshore waters. The resulting ‘boues rouges’ (‘red muds’) have been shown to have a toxic effect on the local marine environment. Alteo are obliged to stop pumping solid waste effluent by the end of 2015, but jobs are at stake and a consultation is ongoing as to whether they might be permitted to continue with liquid waste.

Meanwhile, Cassis itself has been awarded Blue Flag status for the last six years running, which is reassuring if you plan to swim at one of its lovely beaches or coves.