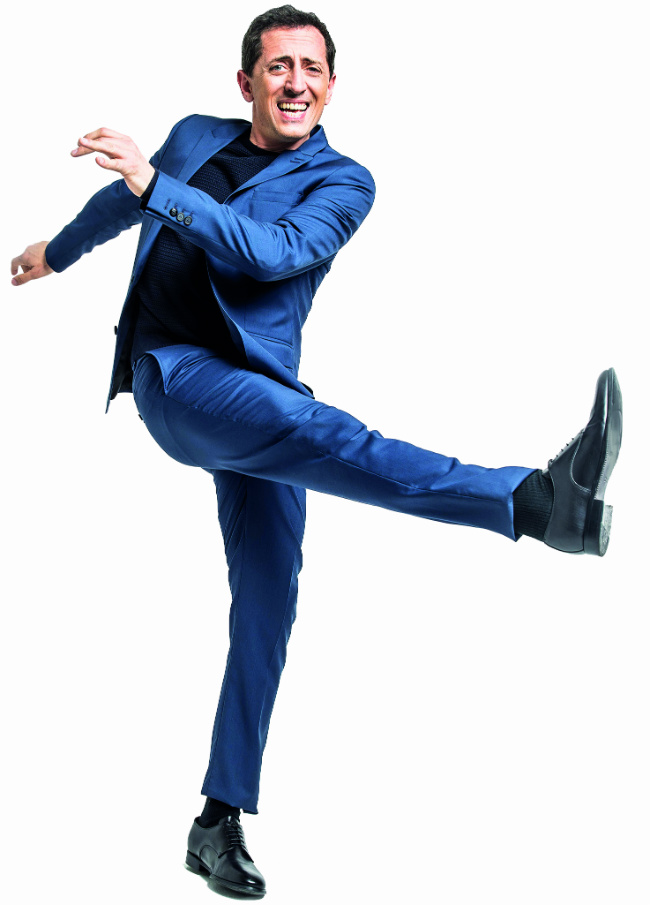 Things inevitably get lost in translation. Words are butchered, names garbled – though you won’t hear Gad Elmaleh complain. Where he is just plain old (all right, super duper famous) Gad in France, the States’ freshest Gallic import has literally become ‘God’, ahem ‘Gaawd’, courtesy of the Yankee twang. And when you’re trying to break America every little helps.

Capitalising on his accidental moniker he even changed his email signature to “Gad bless you” for a while. His decision to up sticks to New York at the peak of his fame, and the not-so-tender age of 45, to get back to grassroots did not quite come out of the blue. After all it was only a matter of time before he traced the footsteps of his idols, Jerry Seinfeld (whose skits first whetted his appetite for stand-up in the 1990s) and Louis C.K. to the other side of the pond.

Though it’s fair to say his adoring fans were not best pleased to lose yet another superstar to the American dream. And with good reason. For the last 15 years, Elmaleh has been synonymous with sell-out arena tours and instant box-office hits. His directorial debut Coco was one of the highest-grossing capers of the late noughties; and as if his CV needed padding, he’s totted up appearances in Woody Allen’s Midnight in Paris and Spielberg’s The Adventures of Tintin – all the while continuing to fill stadiums as the nation’s top funny man.

In 2007, he sold out seven consecutive weeks at the iconic Olympia in Paris – a new record. Cornering the French market was one thing but starting from scratch stateside, vying for slots (and laughs) against a gaggle of up-and-comers and fledgling acts, for $100 a pop at best, was no cake-walk.

His first “disastrous” open-mic stint was a “wake-up call” – rehashed classic jokes falling flat on New Yorkers and punchlines missing the mark in translation. Undeterred, he plodded on, and through sheer sweat, blood and giggles worked his way back to the top; eventually opening for his ‘mentor’ Seinfeld back in 2016, performing at the Carnegie Hall and hitting the road with his first English-speaking US tour, Oh My Gad.

After cracking the States, he is set to return to the screen in the semi-autobiographical Netflix series Huge in France, following a French luvvie who moves to LA to reconnect with his estranged son. Gadspeed!

Early career: After dropping out of Montreal University, he moved to Paris to study drama at the prestigious Cours Florent. Soon he started writing comedy skits before penning his breakthrough one-man show, Décalages in 1997.

I know the face… He directed and starred in box-office hit Coco (currently available to stream on Netflix) and appeared in Woody Allen’s Midnight in Paris. He also played Omar Ben Salaad in Spielberg’s motion-capture animation, The Adventures of Tintin.

Where will we see him next? Elmaleh is set to star in Huge in France, a semi-autobiographical Netflix series following a French actor who decides to move to LA to reconnect with his estranged son.

C’est pas vrai! His father was a professional mime. And that’s not all. The funny man has a four-year-old son with Charlotte Casiraghi, the second child of Caroline of Monaco, and ninth in line to the throne.

Previous Article Great Wine Destinations: Alsace, Triumph over Adversity
Next Article Where to Stay and Eat in Gironde