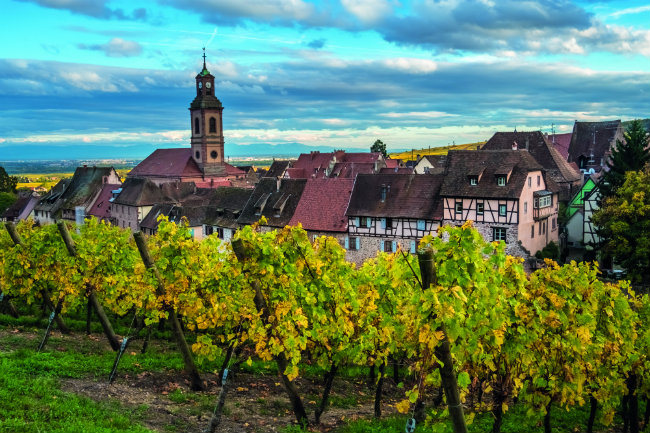 The region of France with the most tumultuous history is also that which produces some of its very best wines. Jeffrey T Iverson heads east

Most oenophiles agree that complexity is the sine qua non of great wine. When flavours, aromas, acidity and texture coalesce in a single sip, creating a millefeuille of transporting sensations, wine becomes something more than just a beverage. It becomes a medium for storytelling. And sometimes that complexity isn’t confined to the glass, but spills over an entire wine region. So it is in Alsace, home to perhaps France’s most enigmatic wines. 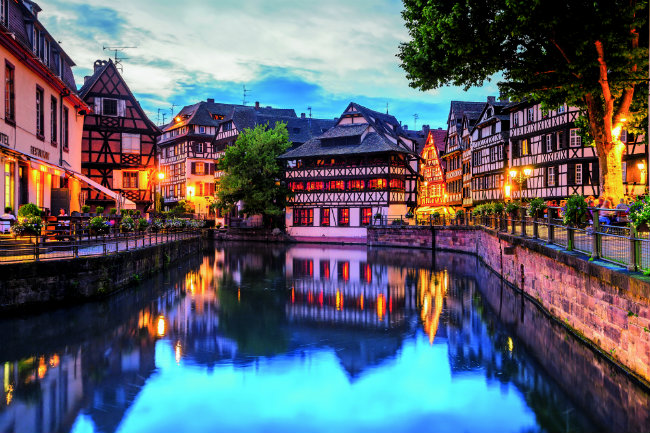 Though it is France’s smallest region, no other can claim such diverse geology, a veritable mosaic of soils from different eras of earth’s history. This constellation of terroirs is planted with multiple grape varieties, vinified in myriad styles. Add a lexicon and culture influenced by neighbouring Germany and Switzerland, and you have wines that can intimidate even ardent lovers of French tipple. Never tried a Boxler Edelzwicker from Niedermorschwihr? You’re not alone. “This pretty enclave of fairy-tale villages in the lee of the forested Vosges mountains,” writes critic Jancis Robinson, “is one of the great, under-appreciated treasures of the wine world.” 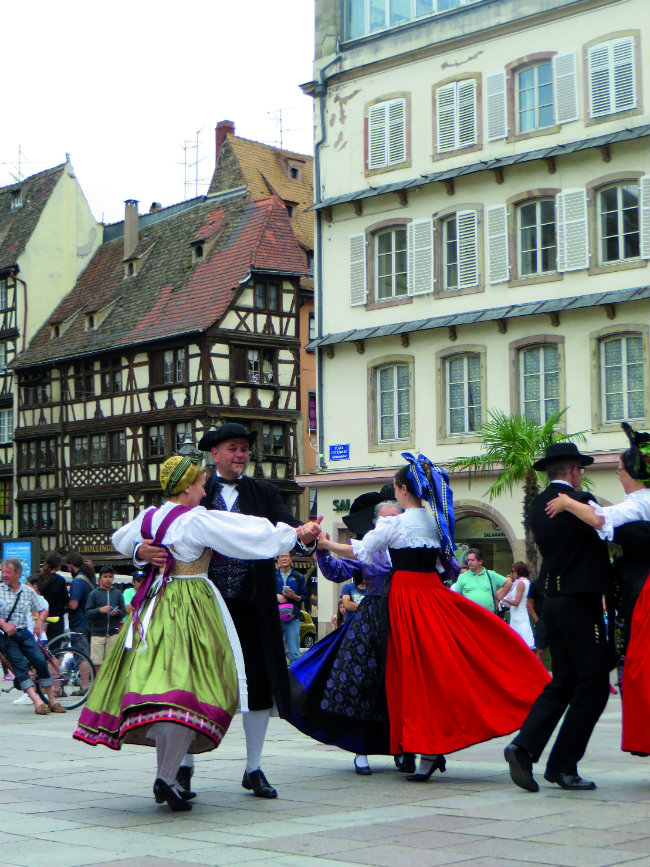 Yet the key to appreciating Alsace wines isn’t a primer in grape varietals or vinification styles – though those can be helpful. Rather, it is a deeper understanding of the history of this remarkable region, coveted and warred over across millennia for its fertile land and strategic location at the heart of Europe. “If you don’t know the history of Alsace, it’s impossible to understand its wines,” says Claude Muller, director of the Institute of Alsatian History at the University of Strasbourg. For oenophiles ready to make the leap and explore Alsace and its tumultuous history, there are rich rewards in store. As Wine Enthusiast magazine so succinctly put it: “The challenges faced by vineyards and winemakers in this region have resulted in bottlings that may be France’s – and potentially the world’s – best wine.” 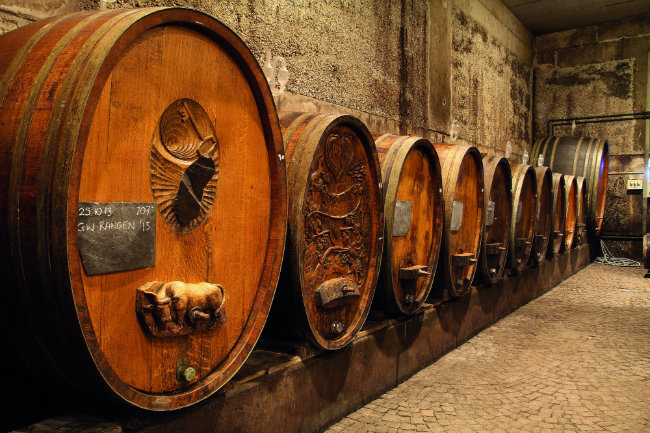 Claude Muller has spent decades researching the history of Alsatian wine. In his eyes, one of the most pivotal dates in the region’s history was 1648, the year France, at the conclusion of the Thirty Years’ War, annexed Alsace. Since around 1000 AD, Alsace had been part of the Holy Roman Empire. “Before 1648, Alsatian wine was extremely sought-after and well-regarded,” says Muller, author of the Dictionnaire des Vins d’Alsace and Alsace: Une Civilisation de la Vigne. “But its status was thanks to geography.” 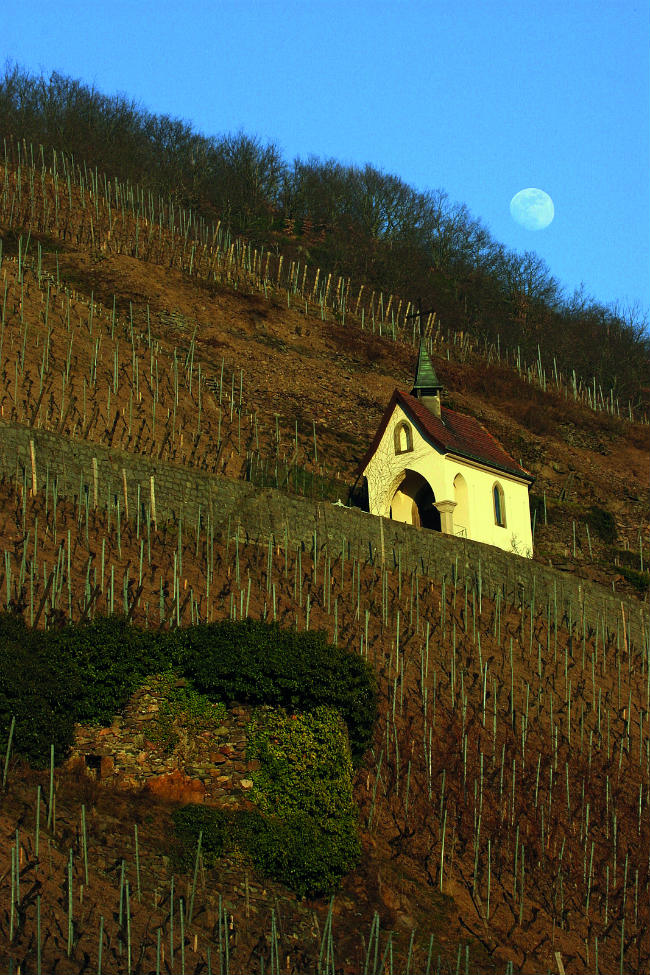 The hills can be hard to farm, but they also give Alsace its unusually dry climate. Spécial Thann

Situated in the Rhine river plain, Alsace is sheltered from moist west winds by the Vosges mountains, such that the only place drier in France is Perpignan, on the Spanish border. With enough sunlight to guarantee grape ripeness almost every season, Alsace under the Holy Roman Empire represented a kind of balmy Riviera for northern and eastern Europe, whose thirst for Alsatian wine proved unquenchable.

For centuries, wine flooded out of the ports of Strasbourg and Colmar. “Thanks to the rivers Ill and Rhine, Alsatians were able to sell their barrels by boat throughout the Holy Roman Empire, and also to Belgium, the Netherlands, England, Sweden, Poland and Russia,” says Muller. Reminders of that lucrative trade still abound, such as La Maison des Têtes in Colmar. Today housing a chic hotel and Michelin- starred restaurant, this breathtaking Renaissance mansion built in 1609 remains the property of the Colmar Wine Exchange. In Strasbourg, a remarkable wine heritage site remains in the cellars of the Hospices de Strasbourg, founded in 1395. 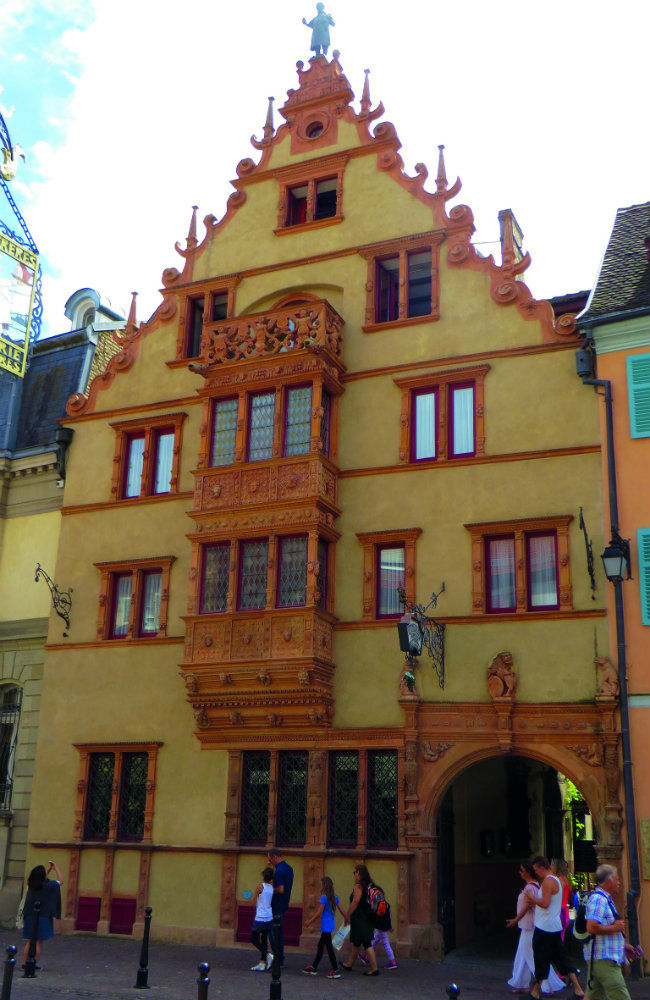 Situated in the medieval basements of the city hospital, the cellars exist thanks to centuries of donations of wines and vineyards by winemakers. Today, it’s also a museum featuring ancient sculpted wood barrels, a 17th-century wine press, and the oldest white wine still in barrel on earth, dating back to 1472. Located near the river, the cellars were within easy reach of the docks where two massive wooden cranes were built in the 14th century to load wine barrels. The cranes were then as great a claim to fame for Strasbourgeois as their cathedral, whose north tower, completed in 1439, was the world’s tallest building for more than 200 years. “At the heart of the city you find the two most important places in Strasbourg,” notes Muller. “On one side you had wine, on the other religion – le vin et le divin.” 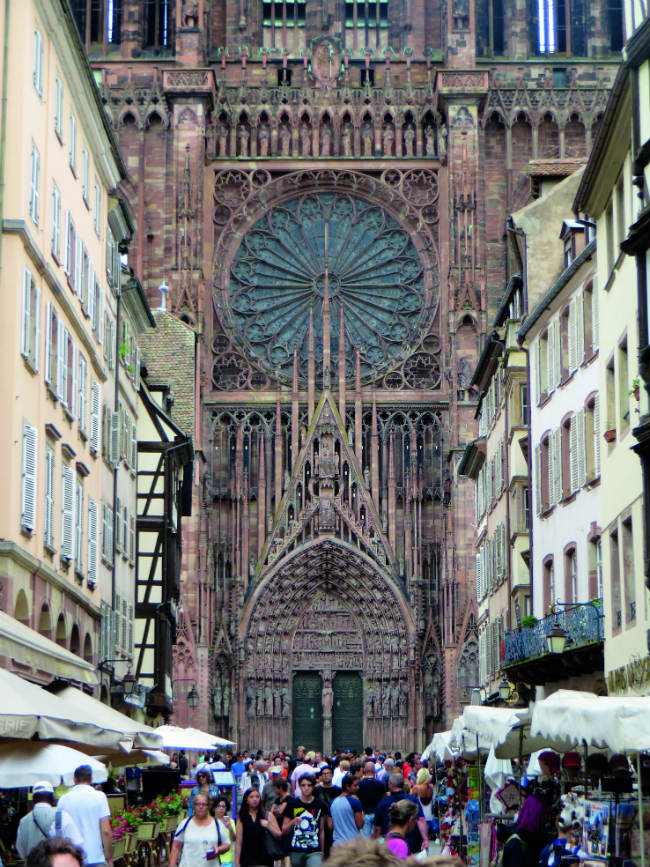 Wine’s sacred nature is still on display in many Alsatian towns. “Each of these beautiful villages you encounter along the Alsace wine route had its glory days, from Thann to Turckheim, Obernai to Marlenheim,” says Muller. Winemakers gave thanks for their successes to Saint Urbain, patron saint of vignerons, whose statues are omnipresent. In sculptures of Mary with baby Jesus at churches like Saint-Martin de Colmar and Kientzheim, the holy child is depicted holding a grape bunch. One 15th-century sculpture in the chapel of Saint-Nicolas de Haguenau depicts the figure of Jesus crucified inside a wine press, an extraordinary metaphor for Christian Eucharist.

Unfortunately, religion also caused misery. Olivier Humbrecht, owner of Domaine Zind-Humbrecht, today based in Turckheim, traces his ancestry back to the Thirty Years’ War, which devastated the region in the 17th century. “After decades of religious war, with Alsace right in the middle, the region was ransacked, people died from famine and disease, and the population of a village like Turckheim was reduced to only a dozen people,” he says. “The whole area was repopulated, not only by surviving families, but by migration from all around Europe.” 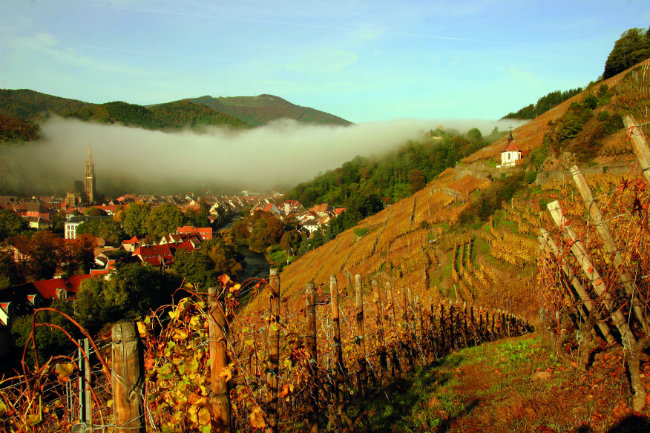 As the Alsatian people changed, so did their wine. “The diversity of Alsatian wines, still evident today, is a reflection of this land – divided, fragmented, and traversed by myriad soldiers and myriad histories,” says Muller. “If Alsace hadn’t had such a troubled history, there wouldn’t have been estates that were owned by hundreds of different lords over relatively short periods, planting and replanting vineyards. I’ve tried to count the number of grape varietal names cited in historic archives, and it passed 300.” It’s a stark contrast to a relatively cloistered region like Burgundy, which is characterised by centuries of land organisation and strict grape varietal selection. 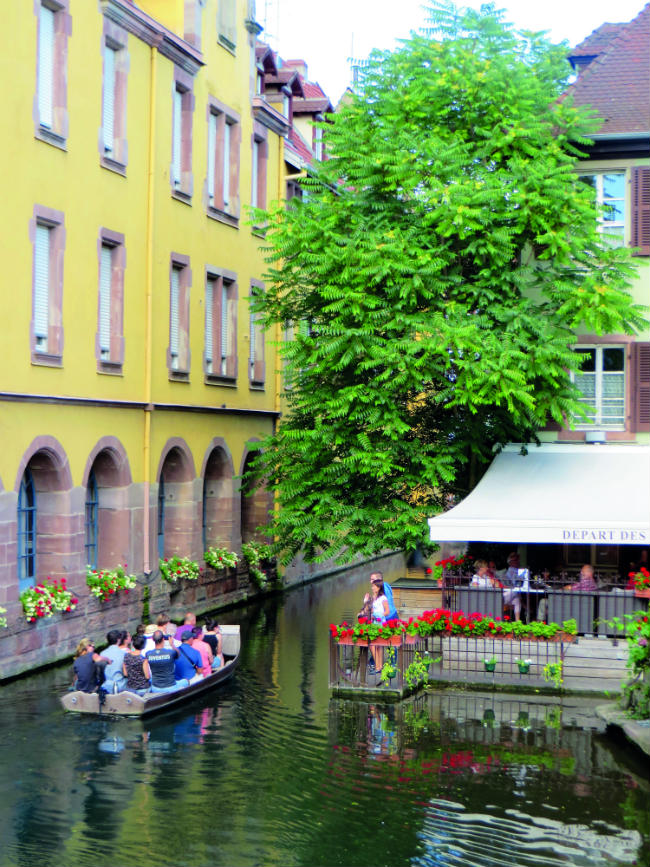 The differences between Alsace and such famous wine regions were brought into stark relief once Louis XIV acquired Alsace. “When Alsace was part of Germany, it was the southernmost wine region of the Empire,” explains Muller. “When, in 1648, Alsace became French, it became a northern wine region. So, in people’s minds, a region of sun and warmth became a region of ice and snow.” Severed from its former market, Alsace failed to conquer the saturated French market. “As the wines of Alsace were no longer sold in northern Europe, and couldn’t break through in France, the region slowly collapsed.” Continued warring with Germany made matters worse, as Alsatians changed nationality four times between 1870 and 1945. 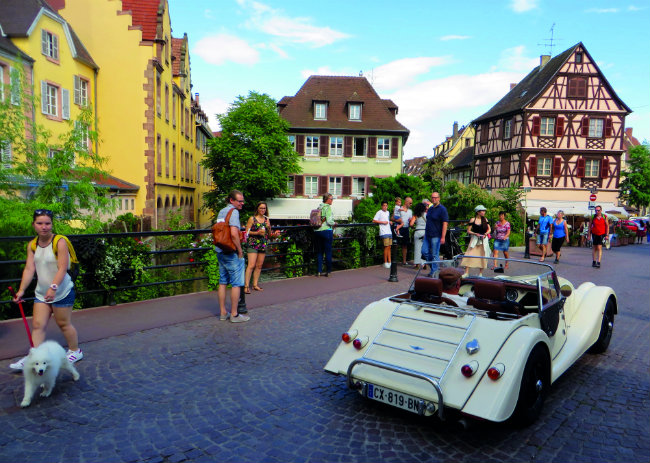 Alsace emerged from World War II shattered and disorganised. In 1951, only 6,600 hectares of vineyards remained in Alsace, one-fifth of what had existed 200 years earlier. But, at long last, peace had come to the region. The founding of the Council of Europe in Strasbourg and the creation of the Common Market heralded prosperity. In 1962, Alsace was officially brought into the French wine fold with the creation of the Alsace AOC label. Soon after, the renaissance of Alsatian wine truly began. “Around fifty years ago, a group of winemakers, including Olivier’s father, Léonard, started to reflect on their struggles,” says Muller. “They adopted a number of measures which made Alsace what it is today – the region producing perhaps the greatest white wines in the world.”

While much of the modern wine world was adopting mechanised viticulture and chemical fertiliser to achieve high yields, and fermentations with laboratory yeasts in steel vats to yield quick-to-bottle, easy-drinking wines, these pioneers chose another path. “They started to argue in favour of dropping yields, often by more than half,” says Muller. “They’d make less wine, but of higher quality.” They returned to traditional Alsatian wood casks, vinifying without chemical intervention, letting their wines mature on their lees for months to develop complex aromas. They greeted the promises of pesticide salesmen with scepticism, and earned Alsace its reputation as the wine region most dedicated to sustainable, organic and biodynamic agriculture in France. “My dad never got swept up in this great chemical wave,” says Béatrice Binner of Domaine Christian Binner in Ammerschwihr. “He made wine with grapes, period. In those days, it wasn’t labelled organic or biodynamic. Our ancestors already figured out so much.”

The village of Kayersberg, one of the finest wine growing areas in Alsace. Photo: CRTA / ZVARDON

But that generation’s greatest feat was not just resurrecting their ancestors’ methods, but also their vineyards. In 1975, the designation Alsace Grand Cru was created and, over the next decade, winemakers proposed sites deemed worthy of the status. “These winemakers decided to start researching places where vines had been grown in the past, but which had been abandoned in favour of the easily cultivated valley and plains,” says Muller. “The 51 vineyard sites that have since been named Grand Crus were already known to make the highest quality wines in the Middle Ages.”

Take the Rangen Grand Cru in Thann, where Léonard Humbrecht bought the Clos Saint-Urbain vineyard in 1977. At the time, the perilously steep site, made up of volcanic rocks and sedimentary sandstones, was all but abandoned. “Nobody wanted it,” says Muller. “Yet Rangen was the most widely written about vineyard in the Middle Ages.” When his Clos Saint-Urbain Vendange Tardive Riesling was awarded a perfect 100-point score by wine critic Robert Parker for the 1994 vintage, for Humbrecht it was as much recognition of the achievements of Alsatians from centuries ago as it was for his own. 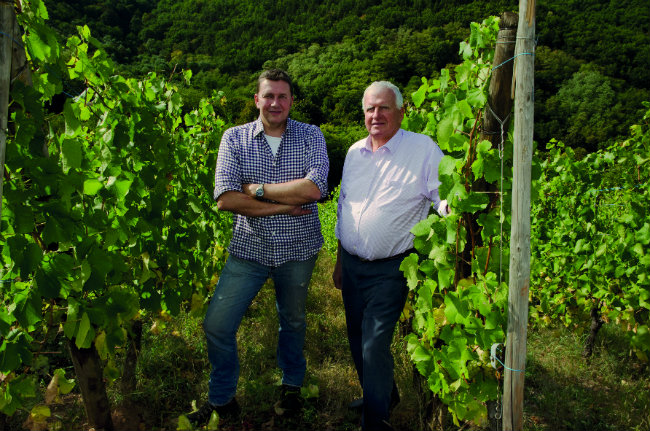 “What we are today is defined by what we were in the past,” says Humbrecht. And what Alsace has always been is complex. Where else are there estates like Domaine Rolly Gassmann in Rorschwihr, with 52 hectares of vines organised into 21 distinct types of terroir, producing more than 60 different wines? “The geology of Alsace is as tumultuous as its history,” says Muller. But that shouldn’t intimidate wine lovers. “This diversity is at once a treasure for Alsace and a challenge,” he adds. “But that paradox is the key to understanding Alsatian wine.” So, visit one of the Most Beautiful Villages of France, like Riquewihr, and sit down to an immersive, fascinating tour of Alsace wine in the tasting rooms of Hugel & Fils. Visit the Museum of Alsatian Vineyards and Wine in Kientzheim. Stay in a vineyard B&B at a biodynamic estate like Vignoble Klur. Try different wine pairings at a family restaurant like Au Cerf d’Or in Strasbourg, a relaxed winstub bistrot like Sézanne in Colmar, or a renowned three-star restaurant like Auberge de l’Ill. Complexity never tasted so good! 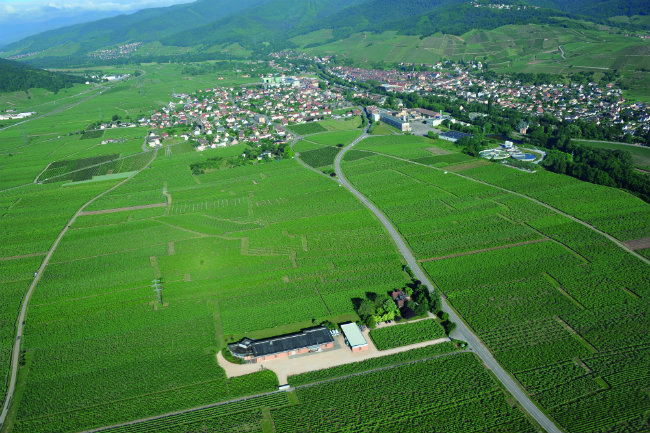 The Domaine Zind-Humbrecht in Turckheim

Though it is France’s smallest region, no other boasts such diverse vineyard soils: granite, limestone, schist, clay, gravel, chalk, loess, sandstone… A mosaic of terroirs, planted with more than seven different grapes, for multiple wine styles! But it is dry Riesling which truly epitomises the Alsatian character. Unlike sweet German and New World versions, here Riesling exudes brilliant acidity coupled with rich texture, moderate alcohol, vibrant aromas without new oak, and a long mineral finish. It’s everything we love about Alsatian wine.