A Little Night Music at the Théâtre du Châtelet 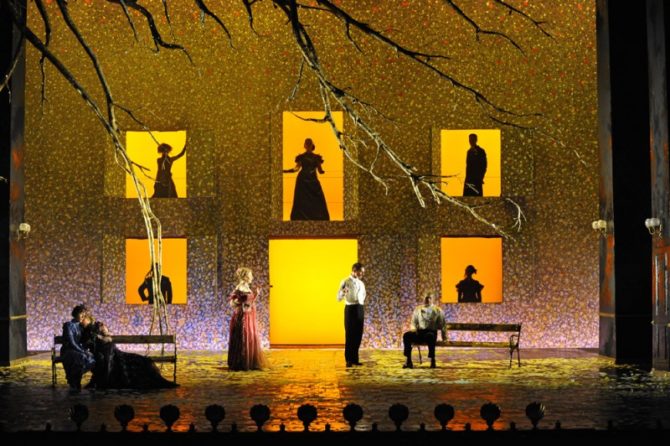 Tinged with the burnished glow of nostalgia, with sumptuous costumes and superb sets  that owe as much to Gustav Klimt and the Austrian Secession as they do to Scandinavian summers, director Lee Blakeley’s new production of A Little Night Music opened to a standing ovation on Monday night.

Based on Ingmar Bergman’s 1955 film Smiles of a Summer Night, A Little Night Music, with music and lyrics by Stephen Sondheim and a sharply witty book by Hugh Wheeler, has never before been produced in France, and it’s on here at the Théâtre du Châtelet — played and sung in English — for a mere six-night run.

Replacing the originally cast Kristin Scott Thomas, who dropped out because of an injury, Greta Scacchi plays the fading actress Desirée Armfeldt with immense charm, delivering the show’s one big hit tune Send In The Clowns with enough delicate, bittersweet feeling to bring tears to the eye. Lambert Wilson, as the hopeful middle-aged Frederik, besotted with his nymphet virgin wife, is a whiz with self-deprecating humor. Leslie Caron, returning to the stage for the first time in many years, is an elegant, worldly-wise Madame Armfeldt, and the rest of the cast is equally up to par, notably Nicolas Garret as Desirée’s pompous lover, Deanne Meek as his long-suffering wife and Francesca Jackson — a true Broadway belter — as the effervescent maid Petra.

It’s astonishing that such a fine ensemble show is scheduled for only a brief, one-week run, and that there are no plans for it to tour. Some astute producer should take note quickly, and give this terrific production a much longer life on the boards.