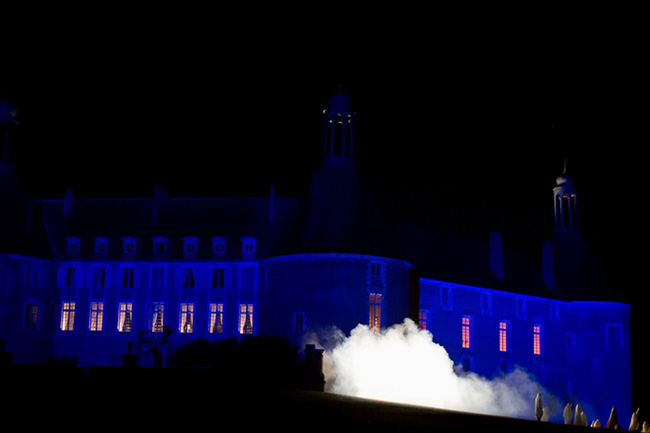 On every year from July to August, the show features more than 600 actors and 50 horsemen participating in various scenes of French history. Atmospheric projections and light effects across the castle, the lake, and the grounds of construction complete the ambience. From Joan of Arc to the American troops liberating Puisaye in 1944, for over an hour and a half, travel through the annals of time.

In the medieval period, Burgundy was one of the strongest regions in France with a host of important Western churches and monasteries. At one point, the duchy was a major rival to the Crown. Two Burgundian abbeys – Abbey of Fontenay and Abbey of Vézelay – have been named UNESCO World Heritage Sites. There are centuries of history to discover!

The show’s organisers have clearly put thought into the logistics of the show. All the seating is tiered so wherever your ticket leads you’re sure to have a good view. We advise you to bring a small blanket though, just in case of a nip in the air or to cushion your seat. However, you needn’t worry about bugs flying about, the organisers place citronella-scented insect repellent around the audience seating so bites shouldn’t be a bother. Although there are food vans, we suggest either eating beforehand or arriving at 7pm and bringing a picnic to enjoy in the stunning grounds before the show starts at 10pm.

What can you do nearby?

Spend the day wandering around the quaint town of Saint-Fargeau, which was named one of the Petites Cités de Caractère (Small Towns of Character). You can also tour the castle and its grounds but warning, many of the rooms are still in the process of being restored! On the plus side, if you are not afraid of heights, you can head up into the roof to see the intricacies of the construction.

A quick walk up the road, you will find the castle’s restored farm, La Ferme du Château, a great way for children to discover the agricultural roots of the region. I still remember riding on one of the horse-drawn carts around the farm as a child!

Alternatively, if you are up for a more energetic excursion, visit nearby Guédelon, just a 15-minute drive away, where a 13th-century castle is being built from scratch! Michel Guyot was inspired to undertake the world’s biggest archaeological project after restoring the castle at Saint-Fargeau. Tours are available in several languages and there’s plenty to see as the castle is set to be completed in 2023.

You don’t see it in the show itself, but I have it on good authority (my grandfather) that the woods you face as you look out over the lake acted as the training ground for the Maquis, rural guerrilla fighters in the French Resistance. If you want to learn more about the French Resistance, head to Lyon where you can find the thought-provoking Centre d’Histoire de la Résistance et de la Deportation (Resistance and Deportation History Centre) while you are there take a tour and explore Lyon’s traboules, the secret alleyways and courtyards that enabled resistance operatives to navigate the city in the midst of the Occupation.

You can reserve tickets for the show here.

Ariane is Digital Editor at France Today. Her love for France started from birth as the daughter of a French mother and English father. Ariane is passionate about all things French, from mustard to Maigret.