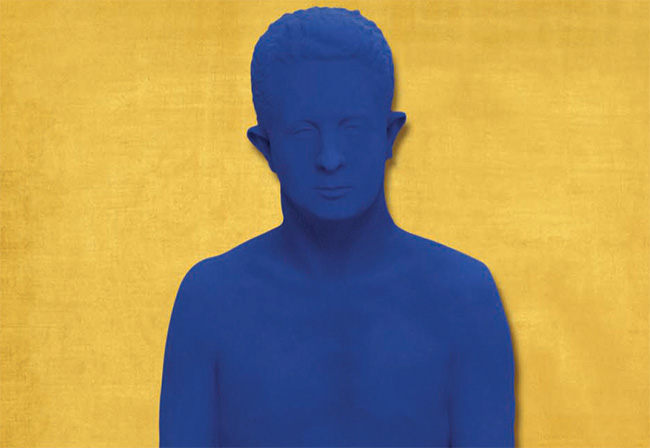 Given the public nature of Klein’s life and work, could there really be more to be discovered? Yves Klein is one of the most famous artists of the 20th century, internationally known for his monochrome paintings, his spectacular performance works and, above all, for the deep, luminous blue (IKB) that has become his trademark, says Bruno Monnier, President of CultureEspaces, the organiser of a major exhibition at the delightful Hôtel de Caumont in Aix-en- Provence.

The exhibition presents around 60 works by the Nice-born artist, including his most iconic pieces, alongside less well-known examples and previously unseen archive material and objects from his studio. It invites us to explore the personal, intimate dimensions of Klein’s life and work, to appreciate his oeuvre from a fresh perspective.

Focusing on his origins, his family and circles of friends, his studios and his relationship with his models, this fascinating and insightful exhibition explores the material conditions of Yves Klein’s work as well as his intellectual processes, spiritual dimension and the humour so often underlying the apparent earnestness of his approach.

The long-awaited Cité du Vitrail opens its doors in the restored Hôtel-Dieu in Troyes. This 18th-century architectural jewel presents unique stained-glass windows from different periods, uses and styles as they were designed to be appreciated, in play with the light. The new venue aims to make the art of stained glass accessible in all its fascinating historical, technical and iconographic dimensions.
Opening December 17
cite-vitrail.fr

Kokoschka at the MAM

Toulouse brings us a sweeping retrospective focusing on the later years of the Franco-American artist, when she took control of her own career with an innovative approach to entrepreneurship.
Until March 5
www.lesabbatoirs.org

On the 200th anniversary of the deciphering of hieroglyphs, the Louvre-Lens offers a major exhibition dedicated to one of the most fascinating symbols of Egyptian civilisation and to Jean- François Champollion, the man who cracked the code.
Until January 16
www.louvrelens.fr

Mirror of the World

The Musée du Luxembourg displays 100 dazzling artworks and objects collected by the Prince Electors of Saxony in the 16th to 18th centuries, a period marked by the struggle for imperial power between the Holy Roman Empire and the courts of Europe.
Until January 15
museeduluxembourg.fr

A unique opportunity to discover the work of 80 female artists brought out of storage for a journey through women’s art over the past five centuries.
Until February 13
www.musba-bordeaux.fr

The majestic Château de Versailles is devoting a major exhibition to King Louis XV, marking the 300th anniversary of the return of the Court to Versailles. Born in Versailles, Louis ascended the throne at the age of five, following the death of his formidable father, the Sun King.

Nearly 400 works from collections all over the world, many never before shown in France, shed new light on the complex private man behind the public persona of the monarch, his childhood, his entourage, his family and his many passions, which included science, books, botany, hunting and a taste for art and architecture.

Among his many initiatives, he financed great maritime expeditions, made Trianon a garden for botanical experimentation, ordered scientific objects and commissioned geographers and astronomers to map the country and the world around him.
Until February 19
www.chateauversailles.fr

Discovery: Tomb with a View

Exactly 100 years ago, an extraordinary discovery was made in Egypt’s Valley of the Kings, famous the world over for its many tombs of the pharaohs. British archaeologist Howard Carter and his millionaire patron Lord Carnarvon became the first people to enter the tomb of Tutankhamun in 3,200 years, revealing a mind-boggling trove of treasures. As it turns out, this tomb was the final resting place of the last Egyptian of his royal family to rule (around 1332 BC – 1323 BC) during the New Kingdom.

From taking the throne at the age of nine to the rumoured ‘curse of the pharaohs’ that befell some of those who had entered the tomb, King Tut’s story is shrouded in legend and mystery. This event-exhibition at La Sucrière in Lyon is a perfect day out for the whole family, inviting us to discover the mythical ruler’s life, with more than 240 fascinating treasures on loan from the vaults of the Cairo Museum, and large-scale, realistic scenes recreated.
Until April 24
expo-toutankhamon.com

After a three-year renovation, the Musée des Arts Précieux Paul-Dupuy reopens its doors with a new museography, including augmented reality, improved accessibility, and an ambitious programme of temporary exhibitions. Located in the historic Carmes district of Toulouse, the museum houses the rich collection of paintings and ethnographic objects of art lover Paul Dupuy and honours to this day his spirit with a collection that is unique, eclectic and ‘counter-current’.
Reopened November 15
www.ampdupuy.fr

A flagship exhibition at the Musée d’Orsay honours an extraordinary and inspiring artist, an icon of women’s emancipation who sought to recognise the uniqueness and ‘soul’ of animals.
Until January 15
www.musee-orsay.fr

The Fondation Louis Vuitton creates an unexpected dialogue between the work of Claude Monet (1840-1926) and Joan Mitchell (1925-1992), presenting their unique response to a shared landscape.
Until February 27
www.fondationlouisvuitton.fr

A major retrospective at the Centre Pompidou in Paris looks back at the career of a fiercely independent icon of feminism who inspired so many artists.
Until January 16
www.centrepompidou.fr