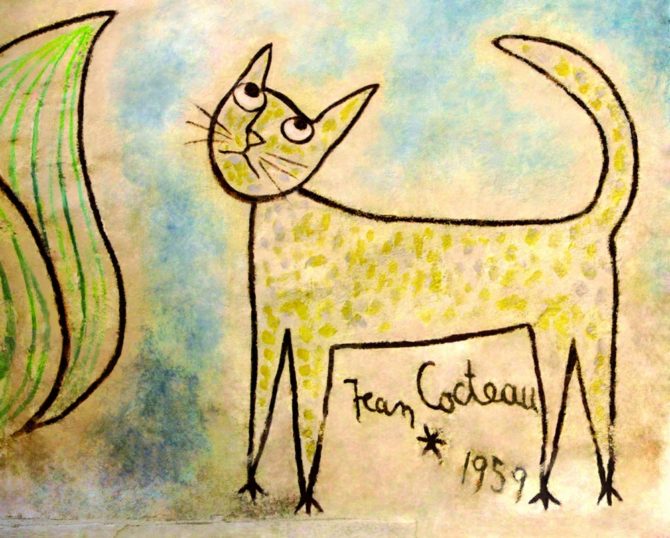 As far as locations go, few could beat Jean Cocteau’s home which, from 1940 on, was at 36 rue de Montpensier. Living in the heart of Paris, above the gardens of the Palais Royal (“La campagne en plein centre de Paris” to quote him), he enjoyed the best of both worlds, and the pleasure of having the writer Colette as a dear neighbour. But by then Cocteau had risen to stellar fame as the pivotal figure of the Parisian avant-garde, an honour that inevitably encroached on his privacy and prompted him to seek a refuge away from it all.

The opportunity arose in January 1947, when he heard of a place up for sale in Milly-la-Forêt, some 50 kilometres south-east of Paris, on the edge of the forest of Fontainebleau, which is a charming and peaceful village to this day: “The house that was waiting for me, far from the doorbells of the Palais Royal”. He bought it jointly with his then partner, Jean Marais, who later sold him his share.

More than a mere house, it was part of the estate of the Château de Milly-la-Forêt and included outbuildings; a vegetable, herbal and flower patch; an orchard; woodland, and a moat which “framed” the property, whose “water painted faux-marble with the sun on the bedroom walls”. The Château itself was not part of the deal and stands outside the property, now sadly uninhabited and run down,  but Cocteau’s house still nestles at the end of the quiet cul-de-sac, behind a gate surmounted by two crenelated mock brick turrets. In his care-free garden, Cocteau “learnt about the magnificent stubbornness of the vegetal world”, echoing the enchanting sets of his movie, La Belle et la Bête, released the year before with Jean Marais in the male lead role. “Everywhere spring is jubilant”, as it was on the day of our visit, although it was too early for the roses. The “Jean Cocteau” variety I saw brought to mind the emblematic rose in La Belle et la Bête and Cocteau’s drawings of Nijinsky as the ‘Spectre of the Rose’ in Diaghilev’s ballet, one of which is on display inside the house.

The house itself, presumably the bailiff’s in olden times, became a museum in 2010, thanks to successive circumstances and initiatives, initially by Édouard Dermit, a gorgeous young man from Slovenia whom Cocteau met in a bookshop in Paris, during July 1947. Cocteau hired Dermit as a gardener, he soon became his lover, then an actor and painter under his guidance, and eventually his foster son and heir to his estate.

Their last few years were spent entirely in Milly, where Cocteau died suddenly of a heart attack on October 11, 1963, following Edith Piaf by a few hours. Deeply affected by Cocteau’s death, Édouard left three of his rooms untouched until his own death, in 1995 – the ground-floor living room, and Cocteau’s study and bedroom on the floor above. In 1966 Édouard got married and had two sons, Jean (who has since died) and Stéphane, who inherited the estate and has loaned his collection to the museum, the Mison Jean Cocteau. Pierre Bergé (Yves Saint Laurent’s partner), was appointed by Édouard as its sole legatee, leading to him becoming the museum’s president.

Unfortunately, Cocteau’s top-floor studio was done away with, but the rooms preserved by Édouard were redecorated as they were when Jean died. Their fantastic array of disparate objects – artefacts, photos, paintings, sculptures and animal skins – and his “Gothic” desk chair, four-poster bed plus the wall painting attributed to Jean Marais make Cocteau’s presence almost tangible, allowing us into his intimate realm. A sense of strange mystery prevails, powerfully conveyed in Jean Marais’s on-screen portrait, as the ‘Beast’ who reappears sleeping by his side in Cocteau’s painting, Sommeil Hollywoodien (1953). This intriguing dream-like world extends into the 100sqm exhibition area. The current exhibition, running until October 2014, is devoted to Cocteau and World War 1.

As we move on, we penetrate deeper into Cocteau’s complex psyche, expressed in such works as Le Potomak (1919) or Le Mystère de Jean l’Oiseleur (1924). We discover Cocteau’s ambivalence, the influence of opium on his creative process, his turnabout from convention to radical modernity and the creation of the ‘Cubist’ ballet, Parade (1917), prompted by Diaghilev’s famously provocative challenge: “Astonish me!” We follow Cocteau into the 1920s, through the music that tied all the arts together – Erik Satie and Le Groupe des Six, notably.

We continue through his post-war Surrealist films, Orphée (1950) and Le Testament d’Orphée (1960), the mysterious autobiography of his tortured soul. We leave increasingly aware of Cocteau’s impact on his time – witness the unrivalled number of artists who captured him in portraits: Picasso, Modigliani, Man Ray, Cecil Beaton, Andy Warhol…

A welcome pause at the salon de thé should be followed by a detour to the must-see chapel of Saint-Blaise-des-Simples, a 15-minute walk away. The only suriving vestige of a 12th-century leper colony, it was built outside the  old village, and lies along what is now the route D142, towards Nemours.

The Chapel was named after both the 4th-century Bishop of Sabastea in Armenia, who was a healer, and Milly’s renowned medicinal plants, known as ‘simples’. The chapel stood derelict until 1959, when, at the request of the local authorities, Cocteau turned it into a gem. This followed his stunning decoration of Villefranche-sur-Mer’s Chapel-Saint-Pierre, two years earlier.

According to his wishes, Cocteau was buried here, beneath the floor, surrounded by his own wall paintings and stained-glass windows – these depict Milly’s simples, Christ’s head above the altar between two angels, his iconic cat (to him emblematic of the Resurrection) and even some masonic symbols. In 1995, he was joined by Édouard, the latter’s coffin laid above his own. Carved on the gravestone is the simple epitaph, “Je reste avec vous”, a promise kept here through his artwork.