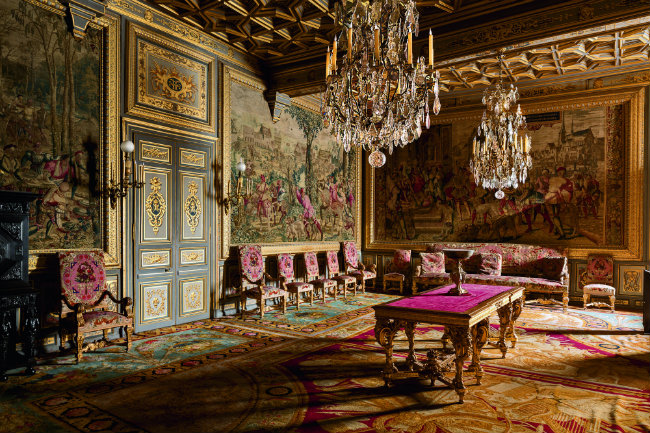 A château with “the shape and colour of time”. Such lyricism may come as something of a surprise from Napoléon, but these were the poetic terms he chose to describe Fontainebleau. This was the palace that he preferred to Versailles, which he found too grandiloquent, too much the vision of one man. The palace whose very lack of symmetry and uniformity – the legacy of its centuries of history – he loved. The palace that he was to view as the “true residence of kings”, and on which virtually all of those sovereigns had left their mark. 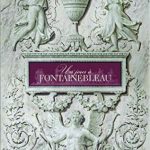 “A Day at Château de Fontainebleau” published by Flammarion

When Napoléon first visited Fontainebleau, in 1803, the château was a mere shadow of its former self. The Revolution had emptied it of its furniture, which had been sold off in the Cour de la Fontaine (Fountain Courtyard). The tapestries that had hung on the walls, the crystal chandeliers, the precious mirrors – all were gone. Through the gaping windows, most of them now with their frames torn out, the wind gusted down the empty passages of a deserted palace. A training academy for army officers had taken over the buildings on the Cour du Cheval Blanc (White Horse Courtyard). The Carp Pond had become a swimming pool for the cadets. 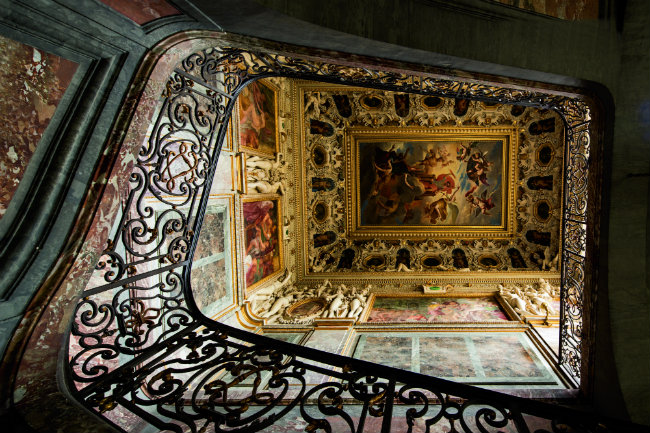 But the majestic decorative schemes that been the glory of Fontainebleau remained in situ, and the palace walls still held memories of the splendours of the French court. When Napoléon sought a fitting place in which to receive Pope Pius VII, who was to anoint him at his coronation in Notre Dame on December 2, 1804, he looked no further than this palace that had welcomed a succession of prestigious guests since the reign of François I.

Fontaine and Duroc, the palace architect and grand marshal respectively, were given orders to make all the preparations necessary for Fontainebleau to house the pontiff. Just 19 days later, all was in place: 40 principal apartments, 200 lodgings for the papal retinue, and stables for 400 horses lay in readiness for the emperor’s guests. To achieve this feat, Fontaine and Duroc had brought out old furniture from the stores of the Garde-Meuble de la Couronne (Royal Furniture Warehouse), now the Mobilier Impérial; they had bought new furniture to fill any gaps; and they had commissioned new pieces from cabinetmakers’ workshops. When they ran out of transport vehicles, Duroc drafted in gun carriages to convey the furniture from Paris. On the arrival of the papal retinue, Napoléon went out to meet the pontiff at a lavish ceremony in a clearing in the forest of Fontainebleau. 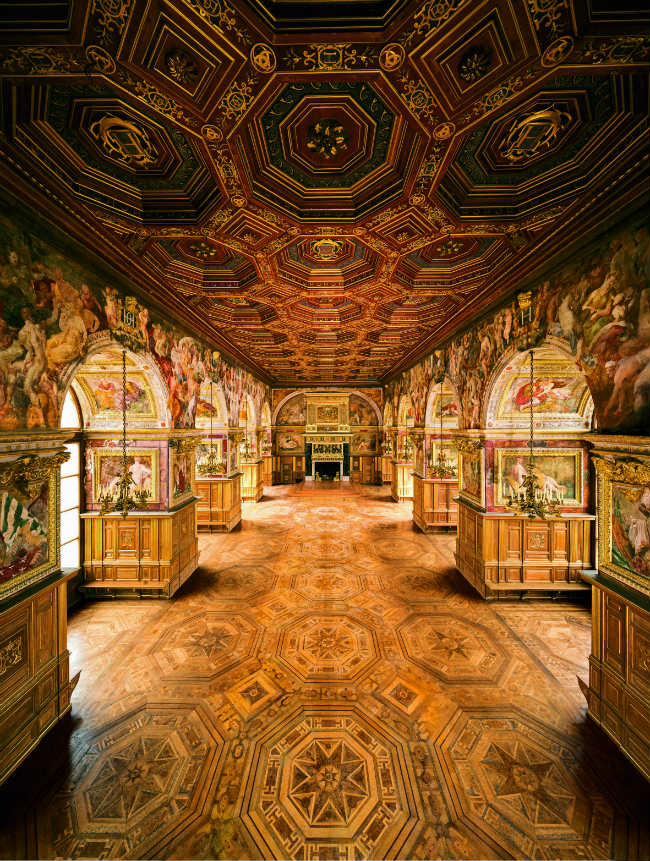 Eight years later, the Pope was back at Fontainebleau; this time, however, he was a high-security prisoner. In the intervening years, relations between the papacy and the emperor had soured, and in 1808 Rome had been occupied by Napoleonic troops. The following year, the Pope was arrested and detained successively at Grenoble, Valence, Avignon, and Savona in Liguria. On May 21, 1812, Napoléon ordered his return to France, and on April 19 he arrived at Fontainebleau.

Pius VII’s 18-month captivity must have allowed him ample leisure to admire the palace decorations. He might almost have been reminded of his Italian home, for in the years from 1530 to 1570 Fontainebleau had welcomed a galaxy of Italian artists. In The Lives of the Most Eminent Painters, Sculptors and Architects, Giorgio Vasari even described Fontainebleau under the Valois kings as a “new Rome”. The Galerie François I (François I Gallery), Renaissance masterpiece and manifesto of the first Fontainebleau School, served as the Pope’s exercise yard. 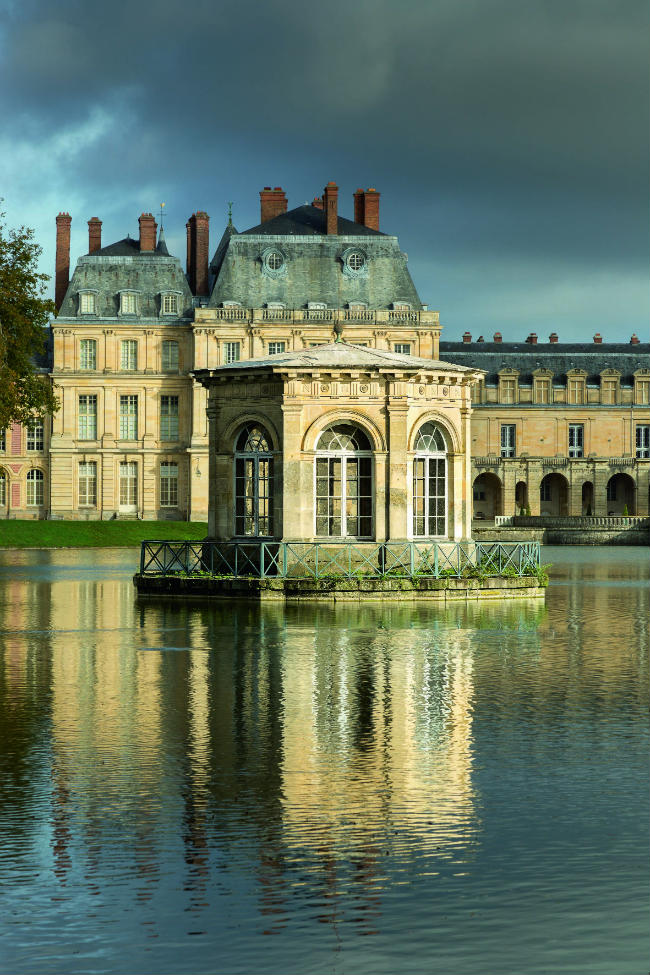 Did he tease out the secrets of the Rosso Fiorentino frescoes, in their frames of exuberantly sensual stucco work? Was he moved by the chilly charms of the large female nudes with which Primaticcio had decked the bedchamber of the king’s mistress, the Duchesse d’Étampes? And what did he make of the profusion of mythological scenes with which Niccolò dell’Abate had covered the walls, pillars and spandrels of the Ballroom, completed under Henri II? Of one thing we may be certain: for Pius VII, Fontainebleau was a solitary and melancholy place where he measured out the many layers of time.

This is the palace into which this book invites the visitors of today, in their turn. Nearly a thousand years have shaped this residence of French kings and emperors of every dynasty – Capetian, Valois, Bourbon, Bonaparte, and Orléans. United by their passion for the sport of kings and the teeming game to be found in its magnificent forests, they have bequeathed Fontainebleau to succeeding generations. Down the centuries, every passing era has left its mark on the fabric of this remarkable palace. The form and colour – and the layers – of time.

An exclusive excerpt from A Day at Château de Fontainebleau by Guillaume Picon, published by Flammarion, 2015. As seen in France Today magazine 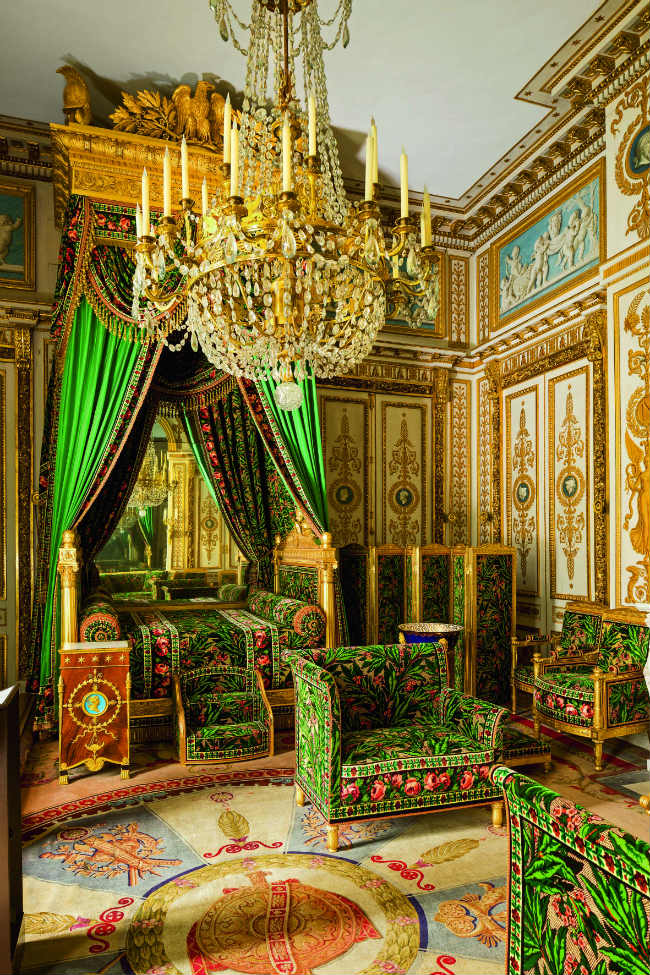 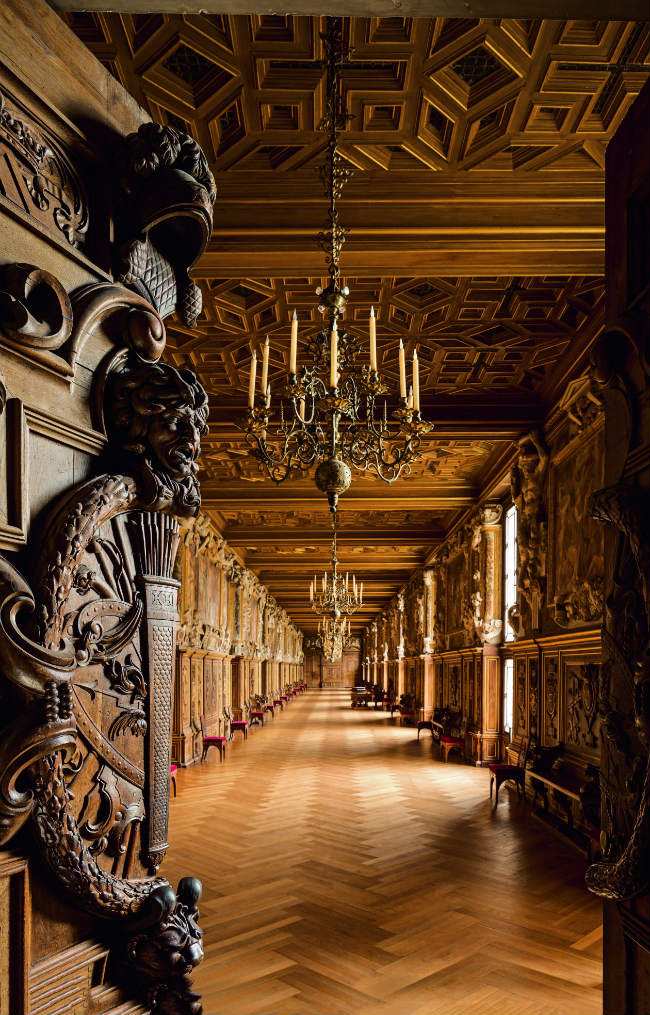