Fleur de Sel from the Salt Marshes of Guérande 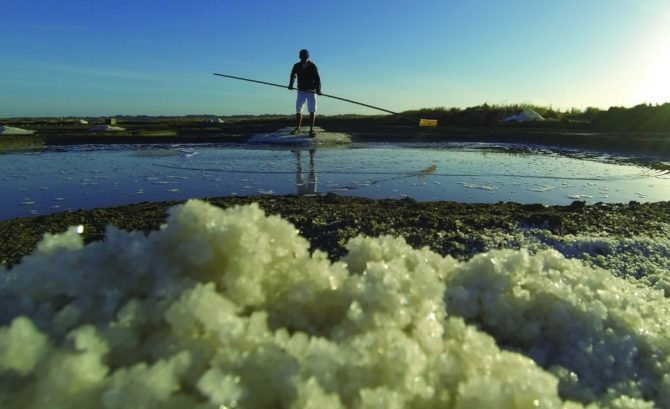 The bay of La Baule in the Loire-Atlantique may be a haven of golden sand, gentle surf and stripy beach huts, but drive 10 minutes inland and you’re greeted by an entirely contrasting landscape. Seabirds swoop overhead, the salty aroma of the ocean is swept along by the breeze, and an expanse of green-brown salt marshes stretch as far as the eye can see. The marais salants of Guérande are preserved in a protected natural area, which is a twitcher’s paradise – 200 varieties of birds congregate here throughout the year, originating from the likes of Norway, southern Europe, Siberia and Africa.

It’s a peaceful landscape which teems with wildlife, yet its man-made moats of seawater carve the expansive marshes into incongruous, square-shaped plains where skilled workers reap a valuable reward. I’ve travelled here to discover one of France’s most cherished artisan industries, one whose premium product – fleur de sel or ‘flower of salt’– is celebrated by Michelin-starred chefs around the globe.

The art of salt-making in Guérande dates back over one thousand years and still utilises ancient Roman techniques to this day. It’s a lengthy process, one that’s dependent on a delicate combination of optimum conditions – the perfect temperature and levels of wind, sun and tide, as well as the expertise of each salt-maker. Precise quantities of seawater are siphoned into the marshes, washing through each section for a total distance of two kilometres before reaching the perfect level of evaporation to allow the salt to be collected.

At that point, the workers scrape off layers of salt manually, then transfer it to a barn, where it will dry over a period of three years. The process requires a level of skill and experience that not many can claim to possess – only around 500 people in the world do this job. True to tradition, the process is also entirely organic – at no point is the natural sea salt treated with any form of chemical or preservative.

The resulting product comes in two forms. The more copious of the two is ‘grey salt’, which gains its tint from the presence of clay in the marshes. Perfect for cooking, it’s commonly used here for salt-crust cooking, a technique in which meats and fi sh are packed in a bed of salt and baked. One local recipe bakes seabass in grey salt, to delicious effect.

With every 10 kilos of grey salt produced comes one kilo of its far more valuable cousin, fleur de sel, which results from a delicate combination of warm weather and wind that creates a surface crystallisation of a delicate white grain. Its subtle taste is renowned for wonderfully complementing any dish, enhancing but never overpowering its intrinsic flavours. Only a culinary heathen would waste fleur de sel during the cooking process – it should be kept à table for finishing savoury or sweet dishes that require extra zing.

Despite an overall decline in the salt industry and the relatively high cost of fleur de sel, demand is steadily increasing – chefs swear by it, and a growing popularity for artisan, organic products has led to an increasing interest in the salt of Guérande. Fleur de sel has long been a gourmet staple in France and is now emerging on the international gastronomic  scene. It is currently exported to 50 countries, and is now particularly popular in Japan – that country’s world-famous emphasis on seafood lends itself happily to fleur de sel, which could be seen as the love child of France’s Atlantic coast and the marshes where the sea blends with the land.

Gastronomists in the USA and Canada have also cottoned on to the unrivalled quality of fleur de sel, leading to a growth spurt in its consumption there. Inevitably, Guérande’s production centres are reaping the benefits of this boom and, as a result, a healthy tourist trade has also sprung up, to serve inquisitive gourmands, many of whom travel from the nearby holiday hubs of La Baule, Pornichet and Le Croisic.

The maison I visited, Terre de Sel, is one of 300 French producers – some 198 of these belong to the Les Salines de Guérande Cooperative, which serves to protect the industry, especially during times of unpredictable weather conditions that can affect the marshes’ yield. Terre de Sel has been a successful tourist destination for the past 15 years, welcoming around 75,000 visitors per year. The salt-makers themselves work as guides, offering up their expertise to any inquisitive guests. While I’m there, the visitor’s centre is packed with families eager to take home a salty souvenir, whether a weighty sack of grey salt, a delicate parcel of fleur de sel in a hand-stitched linen bag or a scrumptious jar of salted butter caramel.

I found this largely untamed corner of the French Atlantic coast to be a real centre of French ingenuity and manufacturing. Funnily enough, a production facility for one of the world’s most high-tech companies, Airbus, is situated just down the road, in Saint-Nazaire. Yet in the marshlands behind, the organic, grass-roots producers of fleur de sel prove that the lowest of low-tech industries can also enjoy its rightful place in the global market.