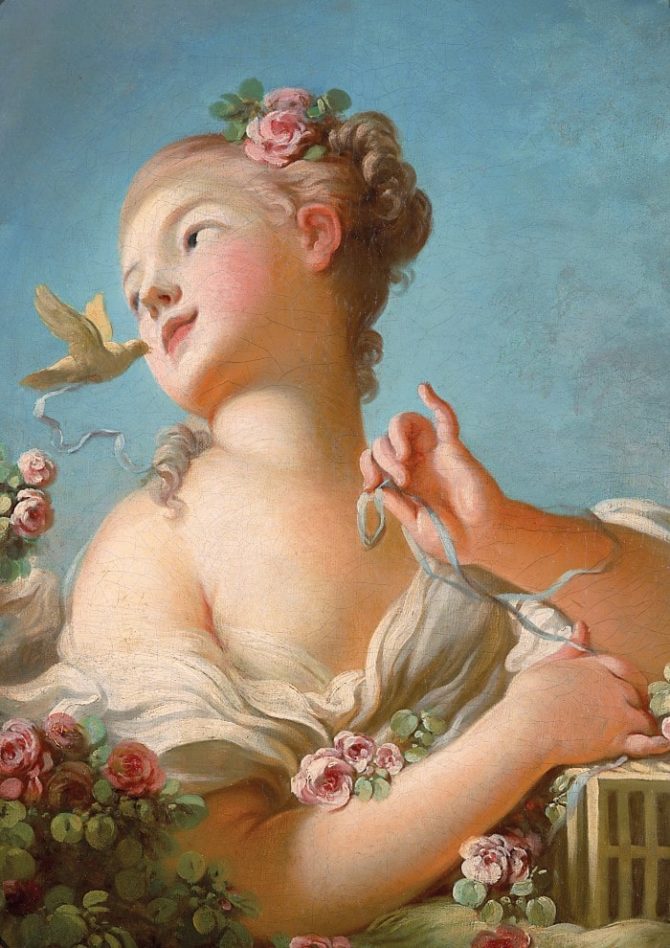 What’s in a name? In the case of this famous maison de parfum, quite a lot as it happens. Imagine the conversation. “What are you wearing?” “I’m wearing Fragonard.” The name rolls seductively off the tongue. A fortuitous spelling too: fragrant Fragonard. Now picture if you can the swirling silks and sumptuous love scenes prettily conjured up by 18th-century Rococo master-painter Jean-Honoré Fragonard. When the founder of the Fragonard perfumery, a newcomer to Grasse, set up in business in 1926 he chose to honour the locally born painter in the naming of his enterprise. It has proved to be an inspired decision (especially considering the entrepreneur’s name was Eugène Fuchs). Today the parfumerie thrives in the capable hands of three of the founders’ great granddaughters. It’s a reassuring family saga of craftsmanship and care surviving the fiercely competitive world of mass-produced perfumes, as I discovered on a recent visit to Grasse and the factory.

But first, a little local history. As anyone who has visited a tannery will confirm, it’s a pretty smelly business and not one you would associate with the finesse of perfume making. Yet the town of Grasse, perched up on a sunny hill above Cannes and the French Riviera, can claim to have once excelled at both industries. The tanneries date back as far as the 15th century when Grasse had a reputation for producing the finest leather. It is said that Catherine de’ Medici demanded that her fancy leather gloves should be perfumed to hide the unpleasant natural aromas. Whether the legend is true or not there is no doubt that these two industries became surprisingly interwoven: Louis XIII inaugurated a guild of Master Glovemakers and Perfume Makers. 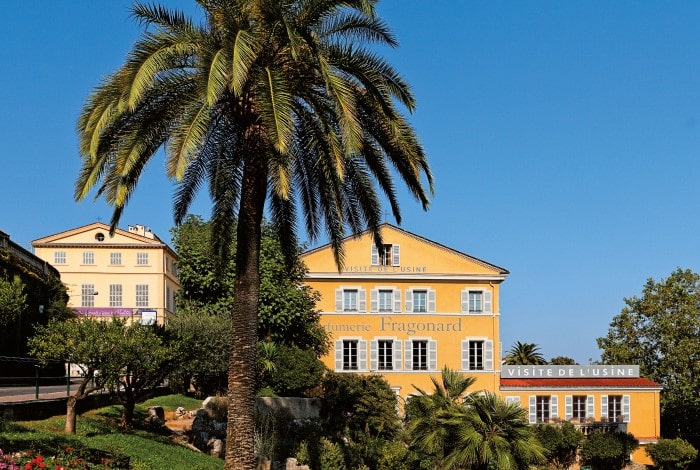 The Fragonard Parfumerie in Grasse. © Fragonard

THE SCENT OF SUCCESS

Thanks to abundant water and a mild climate, the town of Grasse soon realised its future lay in meeting the growing demand for perfume. The sun-drenched fields in the valleys beneath Grasse became a patchwork of flowers and aromatic herbs required for the production of fine perfumes. Jasmine, May rose, iris, geranium, tuberose and neroli (bitter orange blossom) are among the plants still grown and harvested – often by the same family farms who have laboured here for the past hundred years.

Today these plots are prized and cherished by the big names like Lancôme and Chanel but it hasn’t always been an easy ride. In the 20th century, so-called synthetic perfumes threatened to dominate the market. The iconic Chanel No. 5, introduced in 1921, was the first wildly successful perfume which made use of aldehydes. Fragrances created by the fusion of various chemical substances opened up a world of mass-production as well as the creation of more unusual and intriguing scents that bore little relation to the aromas of the natural world. As chemists developed new techniques and global markets opened in the 1950s and ’60s so the budget high street perfume was born, affordable and cleverly marketed to a mass audience largely uninterested in the source or heritage of the product. 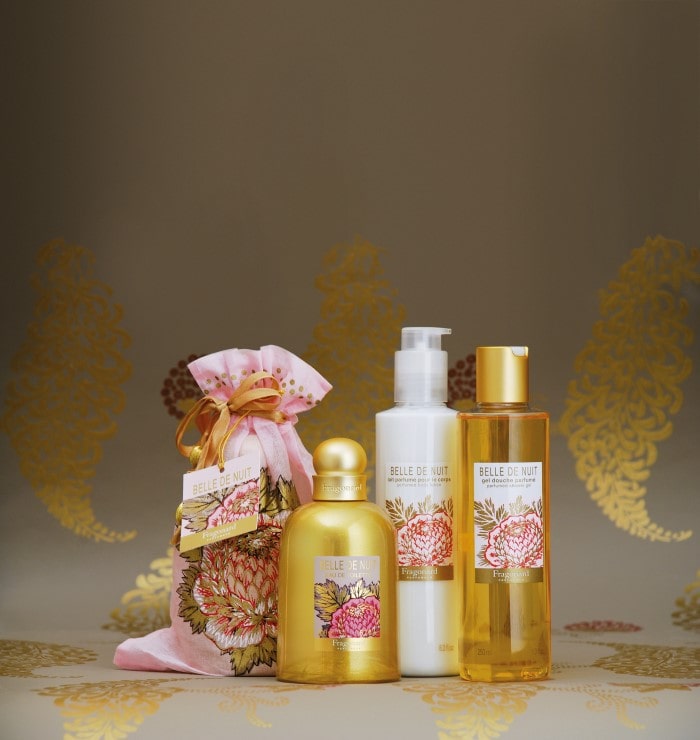 Belle de Nuit, like many scents, has toiletries. © Fragonard

Through this period of turbulence, Fragonard has innovated while sticking closely to its core values and today it is one of the very few family-run craft perfume houses. Amongst its more famous scents are Belle de Nuit, first launched in 1946 and Billets Doux (1950), both distinctively feminine scents created in a post-war world craving escapism and luxury, both now updated and relaunched. The 1960s saw the birth of Soleil, a burst of Provençale sunshine and Grasse flowers, still sold today with its unique ‘sun’ bottle-top. More fragrances followed over the decades, culminating in Fleurs d’Oranger Intense: launched in 2016 to celebrate the firm’s 90th birthday, it pays tribute to the bitter orange flower and its extract, neroli, the emblem of Fragonard. The product range today encompasses nearly 50 perfumes and eaux de toilettes for men and women. An impressive range of soaps, shower gels, room fragrances, fashions and lifestyle accessories has extended the brand beyond its roots. 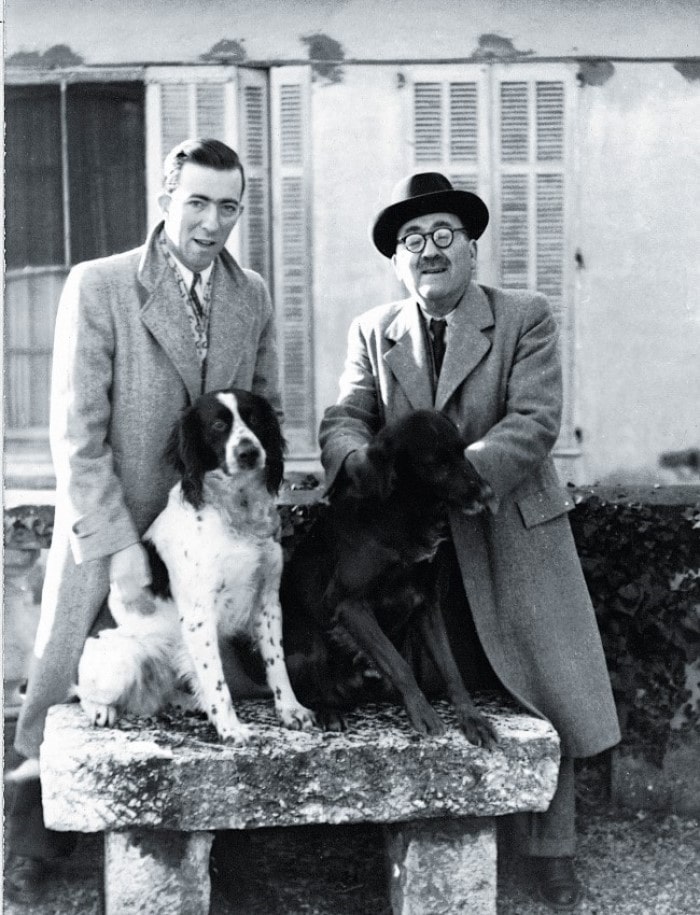 MOVING WITH THE TIMES

This success and continuity came initially under the direction of Jean-François Costa and, in the last two decades, by his daughters Agnès and Françoise, both directors, and Anne Costa, head of laboratory. As consumers demand more natural and sustainable products, they have guided the business into a sweet spot, scaling and modernising production while focusing their ranges on natural and seasonal florals, woods and fruits. They even have a flower of the year – 2021’s is passionflower – for which they create a unique fragrance. Packaging has a major role to play in the purchasing decision and Fragonard’s in-house design team have created a portfolio to be proud of, showcasing colourful and evocative designs drawn from nature which evoke sensuality and romance. 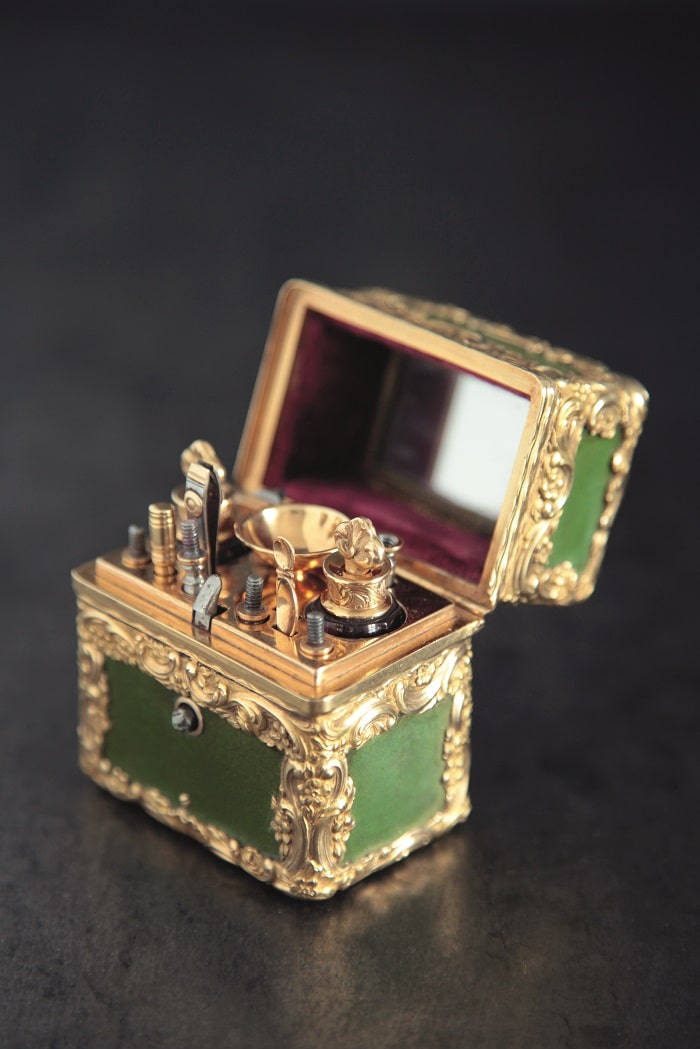 I asked Charlotte Urbain, Directrice Culture & Communication, what made Fragonard stand out today in a competitive world. “Agnès, Françoise and Anne Costa are developing Fragonard as a signature of a certain art of living that goes beyond the borders of perfume. Some 20 boutiques serve as the backdrop, in France and since 2015 in Milan, for exclusive and constantly renewed collections where decorative objects for the home, fashion, accessories and jewellery cohabit in harmony, affirming a pronounced taste for travel, ancestral know-how, and a colourful joie de vivre. And the latest addition is the opening of a chambre d’hôte with a ground-floor boutique in the city of Arles.”

This brand extension is a natural move for a business that has always been more than just a parfumerie. Jean-François Costa was a great collector of historic art and objects relating to perfume and created the first perfume museum in Grasse in 1975. Other museums followed in Paris, as well as museums devoted to Provençal life and to the painter Fragonard. Many shops sell faux Provençal homewares and fashion, but when you buy from Fragonard, you are buying into a southern French art de vivre with an authentic pedigree and genuine cultural standing. 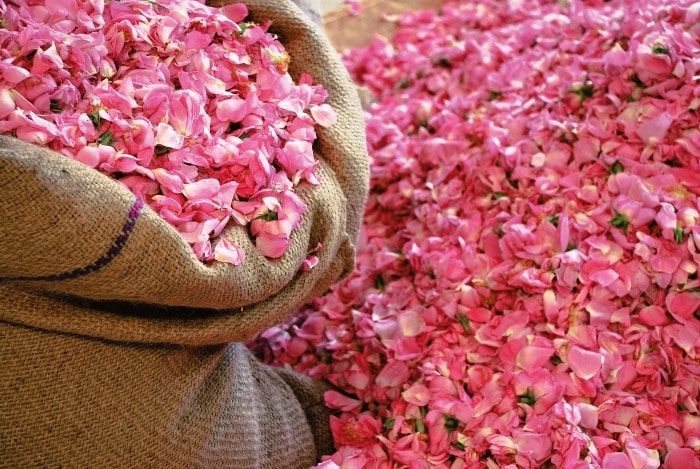 May roses grown in Grasse are a staple ingredient for a number of high-end perfume houses. © Fragonard

In a world where environmental concerns are of the highest priority, the perfume industry has many challenges. Sometimes the natural ingredients that consumers prefer can lead to unethical practices or environmentally unsustainable cultivation. There are only so many slow-growing Indian sandalwood trees in the world. Natural mosses, vanilla, patchouli, musk – all these have largely unresolved issues when it comes to sourcing genuine, original ingredients from nature. Synthetic recreations of natural essences are the industry’s answer to the challenges of ecology and ethics. They’ve been using synthesised fragrance ingredients for about a century and many of the finest perfumes incorporate complicated blends of synthetic and natural materials. Some modern-day younger consumers run scared at the mention of synthetics and seek out artisan perfumes which conform to their understanding of what is “natural”, but this would be to ignore the fact that even the purest extracts from nature are molecular compounds.

There are other issues at stake as well, such as the carbon impact of shipping, the concern over animal testing and packaging wastage. I asked Charlotte Urbain about these issues and I formed the impression that Fragonard is a business that really cares and isn’t just issuing press-friendly statements. For starters, they’ve been in Grasse for four generations, making and selling most of their products in the local area. They are committed to recycling and the use of sustainable sources for clothing, packaging and labelling. The primary ingredient of their fragrance is 100% locally sourced cereal oil. You’ll notice when you buy their perfume it comes in unusual gold-coloured aluminium bottles. These are lightweight, 100% recyclable, avoid the use of glass and have the additional benefit of allowing perfumes to last four years or more.

As Ms Urbain told me: “Our perfumes and cosmetics are produced and distributed without intermediaries, so we operate mainly in a short circuit. Our manufacturing plants are also our sales locations. In addition, we offer many perfumes in large containers (200ml) and with refills of 600ml.” 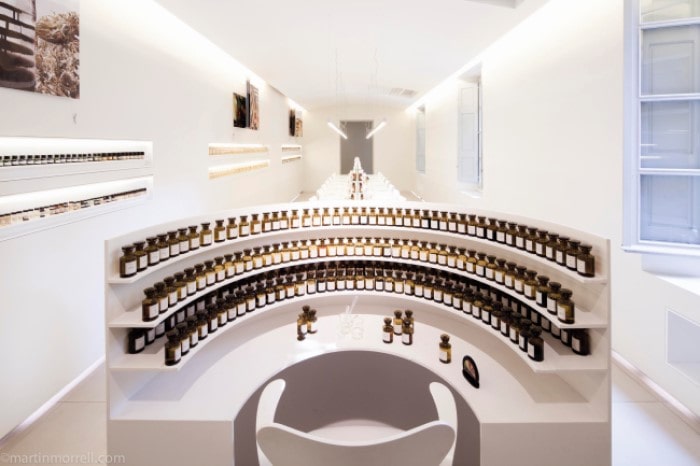 At Grasse, you can sample almost 50 fragrances created by one of the town’s oldest parfumiers. © Fragonard

During my visit to the factory outside Grasse I was able to spend some time in their shop trying the fragrance samples for both men and women. For someone used to sniffing warily at mass-market or high-fashion perfume brands in duty-free airport boutiques, with no previous experience and a very limited olfactory palate, I feared it was going to be a challenge to write anything meaningful. But the contrast between those powerhouse fashion brand perfumes and the Fragonard scents was obvious. The former are often hard to identify, complex, mysterious – sometimes subtle and sometimes overly powerful. What struck me with many of the Fragonard products was a pleasing recognition of the natural source elements but only as subtle hints cleverly combined with other intriguing notes. With nearly 50 fragrances it’s easy to find the one you like and they are surprisingly affordable.

Fragonard as a brand seems to have everything going in its favour when you consider the appetites and aspirations of the 21st-century consumer. It’s a family business since day one. It’s run by women. It sources, manufactures and employs locally. It embraces naturally sourced products. It has cultural authenticity. What else? Oh yes, it has a great name.

Previous Article Fondue Festivals, Alpine Dining and New Mountain Restaurants
Next Article On the Trail of the Marquis de Lafayette