The Franco-American Museum at Blérancourt has reopened this summer after a decade-long project of renovation and considerable expansion. Mary Winston Nicklin remembers the selfless work of the American woman who founded it.

“Look girls!” I gesture excitedly, “Lafayette’s key to the Bastille!” We’re standing in the hall at Mount Vernon, the Virginia home (and now museum) of President George Washington. The elegant country mansion has always been one of my favourite American destinations; a visit, in any – and every – season, is de rigueur for toute la famille. But my young Franco-American daughters (five and two years old at the time) are more interested in the enticing stretch of lawn outside, sloping down towards the Potomac river…

In my hometown of Alexandria, there are macaron shops and fine crêperies, French fashion boutiques and art galleries. But the American love affair with France goes far deeper than food and culture. Perhaps there is no greater symbol of this Franco-American friendship than the Bastille Key, a hefty relic crafted from wrought iron and weighing a pound. When the notorious Bastille prison fell to angry Parisian mobs in 1789, kicking off the French Revolution, the key was given to the Marquis de Lafayette, who then sent it to George Washington, with whom he had fought heroically during the American War of Independence. French support was crucial during the creation of this idealistic fledgling nation. And in gratitude – on the other side of the pond – an American flag permanently flies over Lafayette’s grave in the Picpus Cemetery in Paris. (Bien sûr, my kids have also made a pilgrimage there.)

Fast forward to 1917, when the United States officially entered the First World War. General Pershing’s 1st Division symbolically paraded through the Paris streets on July 4 – America’s Independence Day – to Lafayette’s tomb. Legend has it that Colonel Stanton announced: “Lafayette, we are here!”

But there’s another poignant tale, the untold story of Anne Morgan, daughter of financier JP Morgan and one of the world’s richest women, whose extraordinary work during the World Wars forever stands as a testament to the enduring Franco-American friendship. Indeed, The New York Times obituary (published on January 30, 1952) emphasised – above all else – Morgan’s work in France: “In particular, she was a great friend of France, and was widely honoured for the time, money and devotion she lavished on the victims of both World Wars there. She cared for the wounded and the civilian refugees, and helped evacuate them. Then she established centres for children, for the aged and for the destitute, distributing food, clothing and supplies sent from America.”

As early as 1917, the courageous Morgan worked from the war zone in Picardy (northeastern France). Her base of operations was the Château de Blérancourt, donated by the French Army, from where she commandeered a mammoth effort to rehabilitate the inhabitants of the Aisne. This 17th-century château was situated just 40 miles from the Front. With her friend and colleague, Anne Murray Dike, Morgan assembled a team of American women volunteers. In total, some 350 ladies threw themselves into the effort – what The New York Times called “yeoman work” in the rural countryside: housing the homeless (800 families in just a few months), reconstructing farms, replanting crops, supplying livestock, and tending “orchards blasted by the guns of war”. 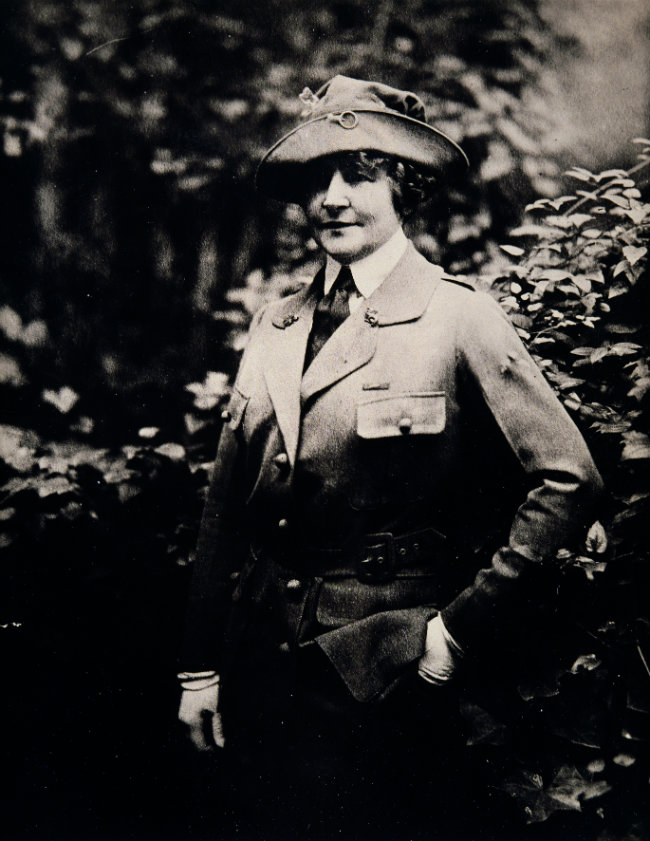 THE WAR TO END ALL WARS

The most devastating conflict in history, “the war to end all wars” left behind an apocalyptic landscape ravaged by bombs, gutted by trenches and ensnared in barbed wire. In the Aisne, where Anne Morgan worked, the war had transformed a “garden” into a “wild desert”, as she wrote. She saw her task as being to make it “bloom again”. It is striking to see the baby steps – what seem mere minutiae – she made to effect this. For example, take the chicken farms they established in the Aisne. In a September 1918 edition of Under Two Flags, the weekly bulletin issued by the American Committee for Devastated France, it’s revealed that these farms were “supported entirely by the sale of chicken buttons at 10 cents each”. School children and adults in the United States sold these buttons to help “re-chickenise France”. But, the newsletter asked, how would these chickens be fed? American children were enlisted to plant sunflowers, save the seeds separated from the flowers, and ship them to France to be replanted. “The crop of sunflowers that comes from the American seeds can then be saved for their seeds – and these seeds fed to the chickens,” was the solution proposed.

What Anne Morgan understood was the importance of instilling self-reliance and self-sufficiency in the local population. In a letter to her mother, Frances Louisa Tracy, dated July 8, 1917, Morgan wrote: “There is a very interesting point of view among French people that Americans do not seem to in the least understand the desire not to let their own people feel that Americans are the only ones that are doing anything for them.” Morgan worked “with and through French people” to get the war victims back on their own two feet. In another letter (August 1917), describing the first sewing and carpentry classes at a school, she wrote: “The whole future is the question of the children in this country – of the very old and the very young.” 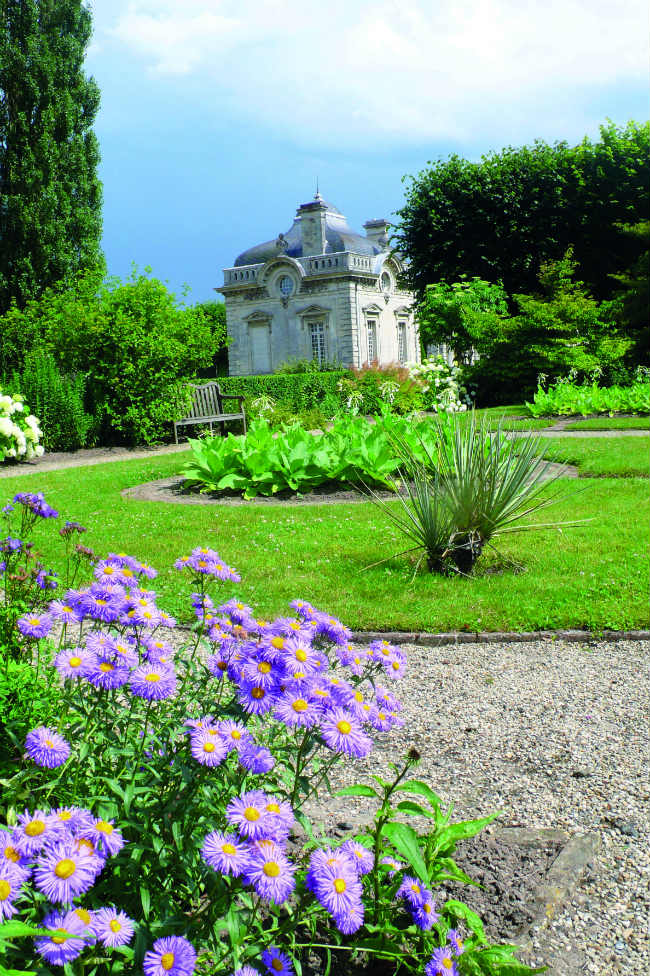 Morgan’s letters document the tremendous work of her American Committee, as do the letters of Marian Bartol, a 30-year-old volunteer from Philadelphia whose 400 pages of letters to her family, as fascinating as any diary, serve as a porthole to the past. Bartol was a prominent socialite whose trips to France were splashed on the society pages of The Inquirer. Her early letters, written just after she first arrived in Paris, make for enthralling reading material: strolls in the Bois de Boulogne followed by tea at the Pré Catelan (still a Paris destination today!); going to Napoleon’s tomb; dealing with the infamous Parisian bureaucracy (what she called the “red tape worm”). But what strikes me most is her realisation, after starting her work at the community store at Blérancourt, that an entire generation had been wiped out. She describes a memorial ceremony for the village in August 1920:

“This part of France has suffered terribly. There was not a man present between the ages of 19 and 40. There were various speeches and singing before the flowers were placed on the monument, ending up with a twenty-minute sermon from the Curé, who saw a good opportunity, and then the children whose fathers had been killed came forward and each laid a few flowers on the base of the monument. To look around at the old people and children, standing, pathetically looking at that monument to their dead, in the old grey-walled cemetery, and to realise that the same kind of thing is going on all over this part of France, makes you feel that America should have come into the war sooner, before such terrific sacrifices were required of France.” 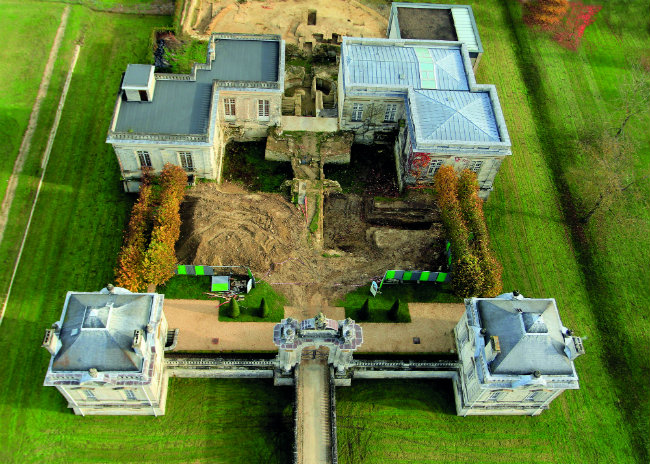 The museum’s renovation project was held up by the discovery of 11th-century archaeological remains. © MUSÉE FRANCO-AMERICAIN

Today the Château de Blérancourt stands as a symbol of the friendship between France and the United States. After the war, Anne Morgan purchased the property and later opened a museum dedicated to French-American cooperation. And in this centenary year of the founding of the American Committee for Devastated Regions, the Musée Franco-Américain reopened, on the symbolic date of July 4, after a ten-year closure and an incredible expansion project which has tripled the exhibition space.

“Our goal is to shine the spotlight on the museum and its history, to give it the visibility it deserves,” explains the curatorial team. “We hope to valorise the transatlantic friendship, and the commitment of the men and women who have fought for the ideals of liberty and democracy since the 18th century.”

The first exhibition is dedicated to the United States’ entry to the First World War, followed by an exhibit showcasing the work of Anne Morgan in the region. On the horizon is a 2019 exhibit on Westerns as a French passion. Highlights of the permanent collection include a Bartholdi statuette given in thanks to the sea captain who transported the Statue of Liberty to the United States, a magnificent porcelain statue by the celebrated manufacture de Niederwiller depicting Benjamin Franklin signing the 1778 Treaty of Alliance with Louis XVI, an Hubert Robert painting showing Lafayette’s 1777 departure for the US, and the Native American dress of Spotted Weasel, the Sioux chief who played in Buffalo Bill’s Wild West Show at the turn of the century. In 1904 it was given to Joë Hamman, the first director of French Westerns.

“Anne Morgan was a true visionary in her global understanding of the reconstruction effort,” says the team at the Franco-American Museum. “Not just in agricultural or architectural or medical assistance, but also in boosting the population’s morale with libraries, parties and sports. Likewise, her employment of professionals (not just volunteers) who trained the region’s women, who then, in turn, could perpetuate their work in the region.”

Anne Morgan received the Légion d’Honneur in 1924 – Anne Dike described the ceremony as “a thrilling performance, done as only the French people know how to do it, with all the ceremony of a great tradition” – and Morgan later became the first American woman appointed Commandeur to the Legion of Honour in 1932. But her work didn’t stop there. In late 1939, she delivered a radio address – the only known recording of her voice – as a call to action at the dawn of the Second World War.

“We are convinced that America is a world power and as such must face her responsibilities, for her traditions and ideals are as much at stake as those of England and France,” she said. “Ours is a democratic state where every individual should face his own conscience and act accordingly.”

Today, her museum continues to shine the spotlight on this incredible legacy and the enduring importance of the French-American relationship. I’m planning a day trip from Paris with my daughters, who are fortunate to carry two passports. As their mother ponders the collections, I imagine they’ll go wild in the Château’s Gardens of the New World, planted with rare American varieties. As Anne Morgan once dreamt, the Aisne is luxuriant with vegetation once more.

For more information on the museum, visit museefrancoamericain.fr 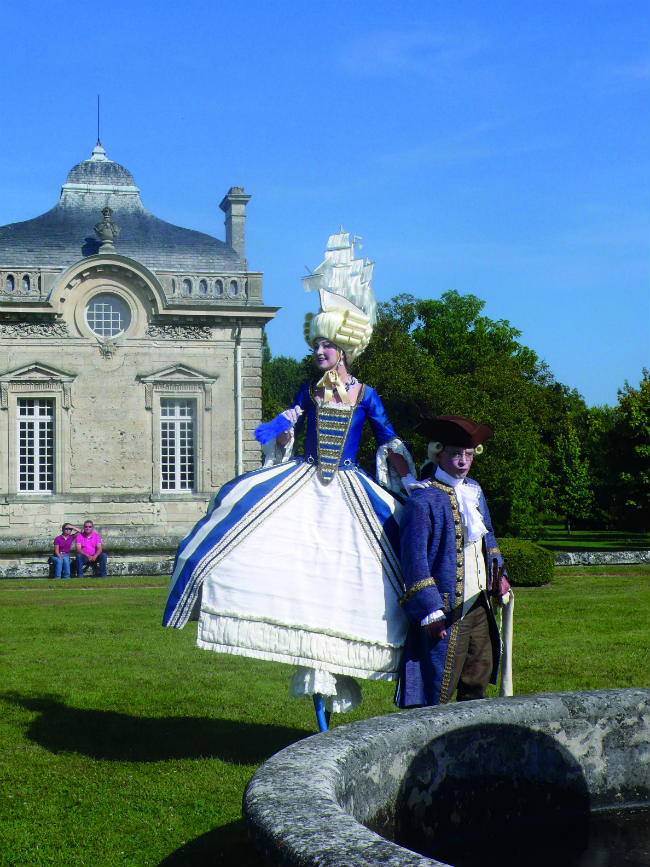 The scope of the museum goes right back to the days of the French Revolution and American War of Independence. © MUSÉE FRANCO AMERICAIN