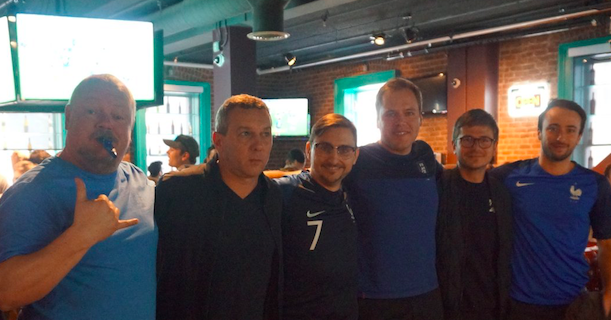 Arnaud Auger has lived and worked in San Francisco for three years, and when the French team for this year’s World Cup took shape, he found his mission. The first game for France was against Australia, but it was at 3 am in the morning Pacific Standard Time (PST).

“I wanted to watch the game, but I didn’t think I was tidy enough to wake up at 3 am to watch it,” said Auger. “I knew I needed a group to watch it together.”

Auger, who is Senior Consultant for L’Atelier BNP Paribas, called his friend Jules Caron, Communications Manager for the French American Chamber of Commerce, San Francisco, and together they co-founded a group whose goal is to watch the French team play in the World Cup.

First game: France v. Australia, June 16. The Kezar Pub opened its doors in the middle of the night for the group where 80 French fans showed up (and two Australian fans) to watch the game. France won 2 to 1. Check out the video below.

But Auger and Caron won bigger. The started a community of World Cup fans that has grown with each game. Next stop was the Alliance Française facility for the next two games against Peru (France 1/0) and Denmark (0/0 game). When France qualified for the elimination game against Argentina, their dream expanded. They convinced the Golden Gate Tap Room (“Best sports bar in town,” said Auger) to host them at 7 am PST, and 150 fans showed up.

“It was the most exciting game in 20 years,” said Auger. “It was great to be celebrating in the arms of strangers and to be patriotic together. Every French person felt like they were at home for this special event.” 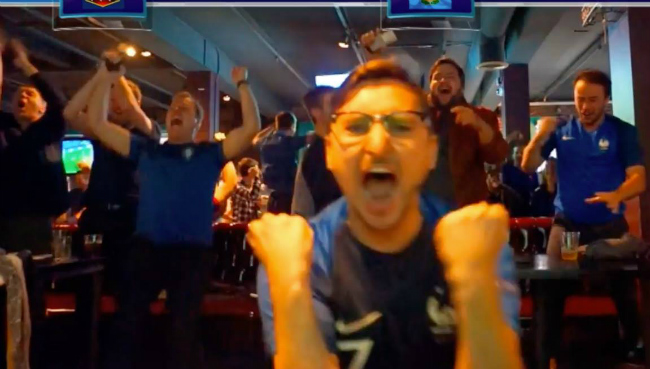 “It’s boring to be alone during these events,” said Caron, who began his job and living in San Francisco April 1. “There’s no place like home, but this group empowered our nationality. It also empowered the goal that we welcome everyone, and it was a great atmosphere.”

France beat Argentina 4 to 3, but the event attracted a variety of fans, including Jennie from Hong Kong, who cheered “Allez la France” after the game. (See her here at the end of the group video minute 8:21.)

“The game connected us back to our community – both the French and the non-French who love France,” said Caron. “We’re French with a team.”

The game fans are physical in a good way. Cheers for Forward Kylian Mbappe, one of the youngest stars of the team at 19, is “Allez Kiki, allez Kiki.” When Forward Antoine Griezmann gets the ball, “Grizou Grizou” is cheered. When things get really amazing, the crowd hollers a version of “pow pow pow.”

“You have to jump or you’re not French,” said Caron.

In fact, football is a national sport in France and the number one sport in the world. Children play worldwide because all it takes is a ball and some friends. It doesn’t need special fields, but can be played in the street, at school, at the beach, in a parking lot, etc.

“When you move abroad, you realize how French you are, and it’s special to share a passion for your country and sport,” said Caron.

“But the World Cup goes beyond differences and rivalries,” said Auger. “Normally there is club rivalry, like the teams Marseille and Paris Saint-Germain. The World Cup brings France together. The great thing about our group is that it is important for us to be together. It provides a feeling of belonging.” 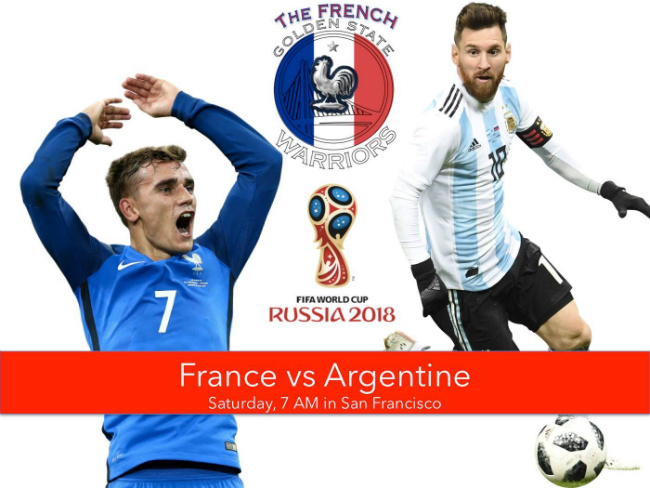 The next game is Friday, July 6 at 7 am PST against Uruguay at the Golden Gate Tap Room. A big crowd will attend as the game is expected to be a “death match.” But the French fans have great hopes that the youngsters and the old timers will provide the right strategy.

“It will be a tough game,” said Auger. “We will have a much bigger crowd watching this time.”

“But we will also make sure that everyone is welcome to enjoy the game,” said Caron.

“Yes, we will salute each other and hug each other in respect like the players do at the end of the game,” said Auger. “But it will be dramatic.”

Want to join the group on Friday? Sign up for attending at the Facebook site. The game starts at 7 am, but Auger says it will be over by 8:40 am, so there is still time to arrive at the office for a 9 am meeting.

“The best thing is to invite friends, colleagues and your boss,” said Auger. That way, no problem about being on time for work.”