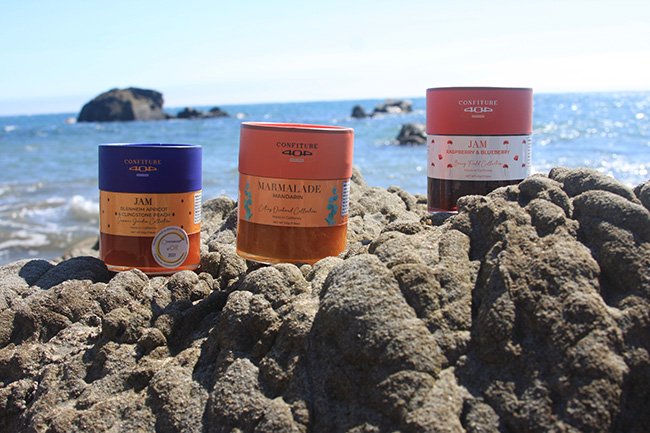 Nature is full of inspiration, including the ingredients for award-winning jams and marmalades. Martha Sessums talks to the French owners of Ladera Patisserie.

The French owners of Ladera Patisserie based in Menlo Park, CA, have always taken  long walks in their forested neighbourhood, enjoying the fresh scent of trees as well as the wild fruits and herbs. Their surroundings became the inspiration for their innovative confitures.

“Walks in the morning, especially during the Covid-19 lockdown, were a real inspiration for us,” said chef and owner Fateha Id boubrik. “There were lots of wonderful-smelling eucalyptus and fruit trees that inspired us. We like tradition but were eager to get to another level and be creative with our confitures.”

Creativity has paid off for Id boubrik and her chef husband Mustapha Khenniba. They went from providing pastries to restaurants and hotels in the San Francisco Bay Area to focusing mostly on jams and confitures. The result is their Meyer Lemon and Eucalyptus Marmalade won a gold medal in the British Dalemain Marmalade Festival in 2020. They also earned two medals in the 2021 French world jam championship Les Confituriades. The White Peach, Yellow Cherry Plum & Eucalyptus Jam took first place and the Blenheim Apricot & Clingstone Peach Jam won the Confituriades d’Or (gold prize). Based on those two medals, they were awarded the Champion du Monde in the contest.

“The contests were judged on texture, colour, taste, smell and creativity,” said Khenniba. “I was born in Morocco and we use eucalyptus in cooking, so we decided to add that taste and smell. This addition was unique and paired well with the white peach and cherry plum. When you open one of those jars, you get an explosion of wonderful aromas.”

Id boubrik was born and raised in France and a part of her inspiration came from cooking confitures with her mother and friends at an early age, but also from French jam maker Christine Ferber. After graduating from culinary school Lenotre, Id boubrik worked with several famous pastry chefs including the Pierre Hermé atelier in the Alsace region of France where she discovered Ferber. The Ferber jams use only fresh ingredients, the best fruits and a dash of sugar.

“I didn’t care much for jams, but I tasted her jams and wow, hers changed my whole prospect about jams and jam-making which I carried with me,” said Id boubrik. “Her inspiration set me off in the wonderful world of jam-making.”

But it took several years for the chef couple to focus on confitures. They met in France, fell in love and married but maintained two careers. Id boubrik mainly worked in the food hospitality and pastry environment in France, Qatar and ultimately the Bay Area where she worked in several Michelin-star establishments. Khenniba has restaurant background and was a chef and co-owner of a restaurant in Japan. When he joined her in California, they started Ladera Patisserie in 2015, focusing on pastries. They played around with confitures but it wasn’t until the Covid-19 lockdown that they focused on the jams and the French techniques that they feel make their products special.

“We made it a habit to take long walks in nature,” said Khenniba. “It’s a very relaxing, peaceful moment for us in the day. During that time we get to think and absorb the surroundings, like the colours, the smells…we get a lot of inspiration from nature. We had plenty of time so we said let’s start making jam. Let’s give it a try.”

The Ladera Patisserie claims their products are “French in particular heritage and tradition.” That means they use traditional French techniques such as batches made in copper pots and, depending on the fruits, macerate them 24 to 48 hours before cooking them. Plus, each batch is small, typically around three to four kilogrammes. But, according to Id boubrik, they developed their own recipes and techniques, experimenting with different fruits until they find the right flavour combinations.

There’s also community stirred into the confitures. Not only did inspiration for flavours come from their neighbourhood, but some of the fruits and the eucalyptus leaves they use are grown by their neighbours. The yellow cherry plums are harvested from a neighbour’s tree as are some of the plums and passion fruit. Plus, they buy apricots, quince and other fruits from farmers who have become their friends in Hollister, California, a farming community south of San Jose. It is all high quality but purchased or exchanged with friendly community members.

“Our confitures taste of our walks and are a blend,” said Khenniba. “From Europe, we bring tradition and from California, we bring flavour.”

On each jar of Ladera Patisserie confitures is a drawing of a car with a license plate that says “French Inspired” and the headline “Confiture 404”. It represents the French classic car Peugeot 404 of the 1960s and 1970s. To Id boubrik and Khenniba, it represents a French era known as “La Belle Epoque” when everything was made with quality, ethics, creativity, and great craftsmanship.

“It is a kind of tribute to that period of time, and a philosophy that is reflected in our products,” said Id boubrik. “That’s why we make sure to use only local ingredients whenever we can, do our best to elaborate one-of-a-kind, original flavours made with local fruits and create unique, elegant, packaging. Plus, a Peugeot 404 is fun to drive on California Highway 1.”

Ladera Patisserie jams, marmalades, spreads and confections are available on their website and every Saturday at the Downtown Palo Alto, CA, Farmers’ Market.

Previous Article Best Places to Stay and Eat on the West Coast
Next Article Beaumont-du-Périgord: A Historic Dordogne Town