The Carrefours of France in San Francisco: Hayes and Gough/Octavia 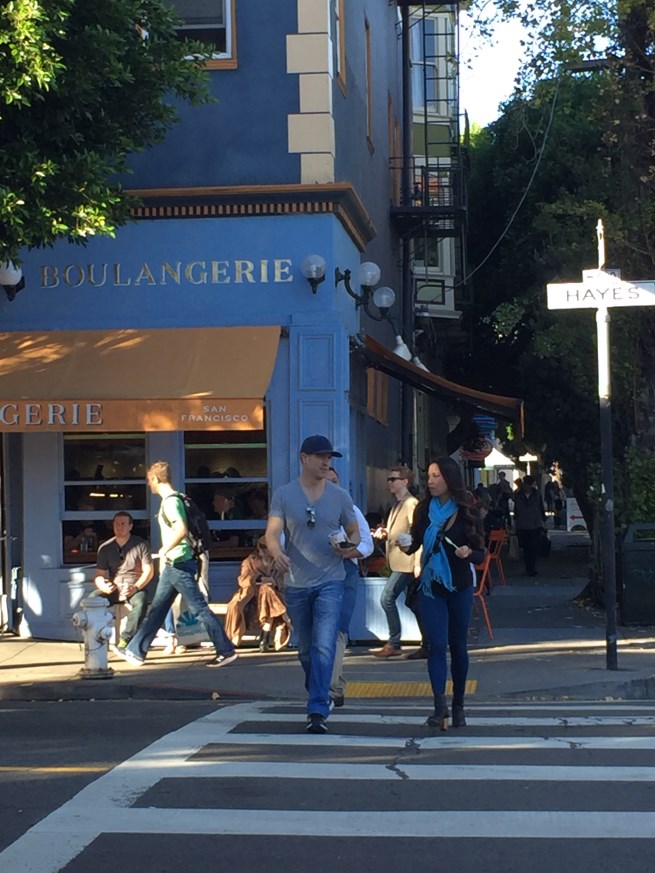 During the 1849-50s Gold Rush, many French came to San Francisco to find their fortune.  It was San Francisco that grew rich with the addition of French culture, and that continuing influence is seen today from many intersections, or carrefours, in the city. This article is part of a series on French carrefours in San Francisco; for the first installment click here.

“I love this place!” Lebrun-Damiens said. “First, it looks like many modern neighborhoods in France (for the vibe, the architecture, the terraces.) And second, it is full of French shops like Boulangerie de San Francisco and Chantal Guillon’s macarons.” 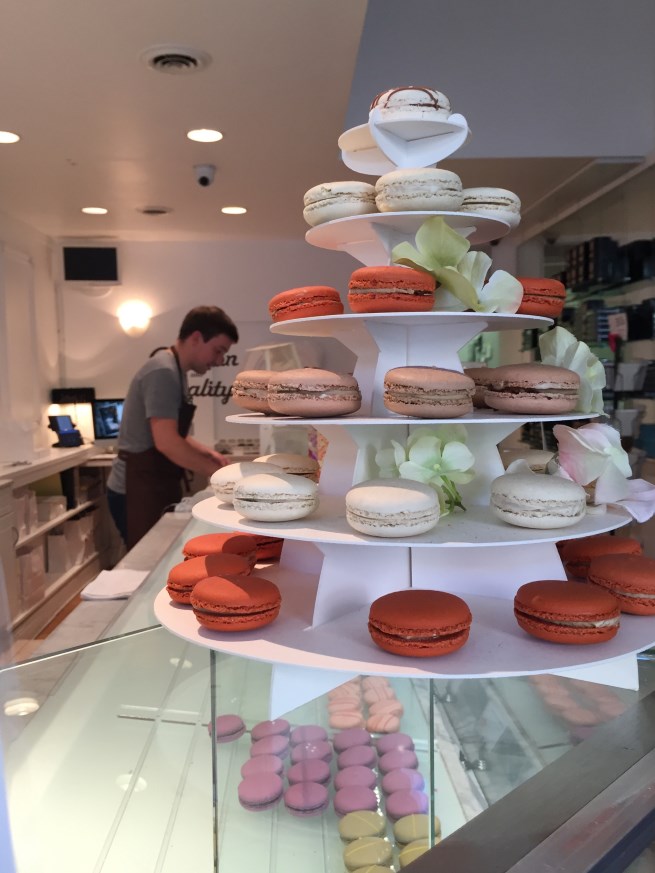 On a sunny day in San Francisco, the next-to-each-other carrefours of Gough (pronounced “goff” in San Francisco) and Octavia streets that cross Hayes Street come alive. The setting: a small neighborhood park, restaurants with sidewalk seating, great food and apparel shopping, with the carrefours being in the middle of a popular area. 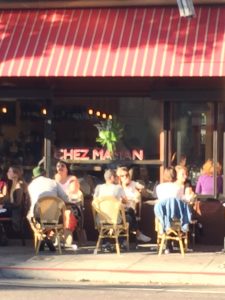 Chez Maman customers enjoy the sun at the carrefour of Hayes and Gough. Photo: Martha Sessums

The carrefours are located in Hayes Valley, a neighbourhood in the Western Addition district of San Francisco. It is near the Civic Center and SF Jazz with residential streets full of Victorian-style houses, or “Painted Ladies.” When the 1989 earthquake took down the Central Freeway, it opened up the area, which is today a shopping and foodie mecca, yet still retains its sense of community.

The community vibe starts at Patricia’s Green, a narrow, two-block long park that was once a Central Freeway on ramp. Starting at Hayes and travelling along Octavia, you’ll find walking paths, pop-up food trucks and art installations, people with their dogs, and friends and families sitting on the grass eating macarons, ice cream or French bread. All are enjoying their day and each other, similar to any park in Paris or France. 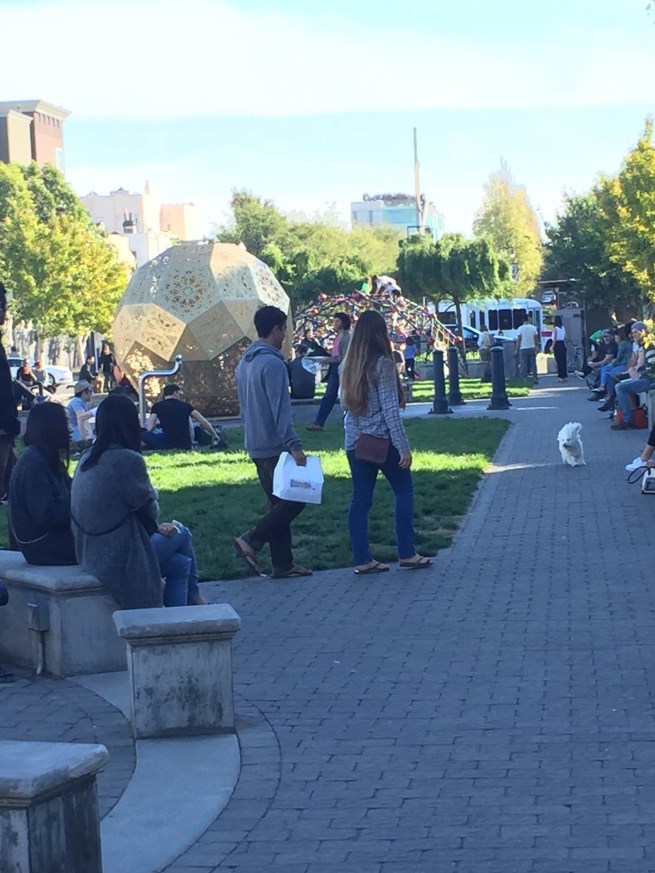 On the corner of Octavia and Hayes is La Boulangerie de San Francisco. Not only is there a selection of croissants and French-style breads, but also brunch and lunch selections that include tartines, a Parisian omelette of ham and Swiss cheese, Niçoise salad and French onion soup. Tables along the sidewalk are full of people chatting away as they enjoy their meals. 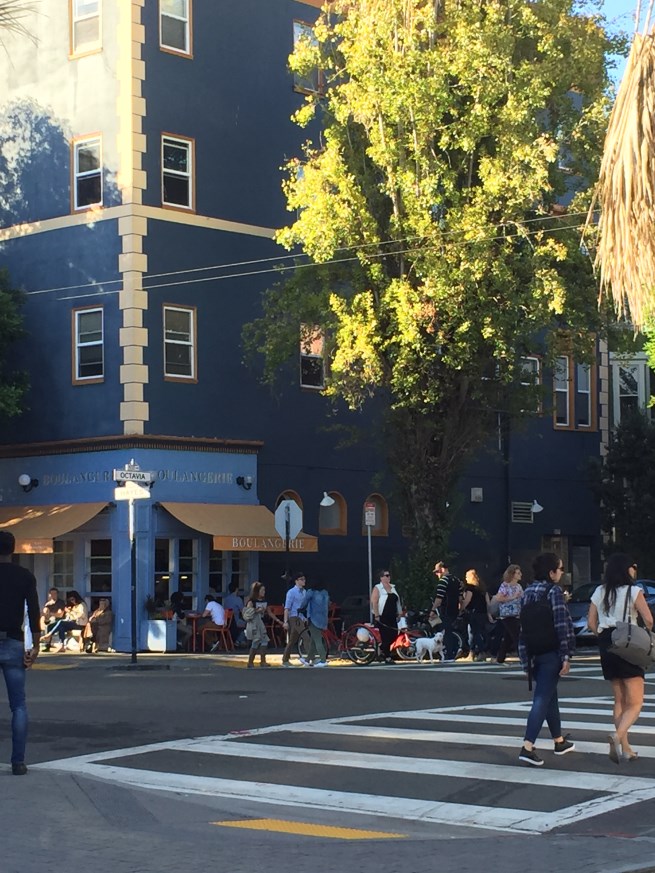 La Boulangerie was founded in 1995 by French baker Pascal Rigo as La Boulanger. He sold it to Starbucks in 2012, only to see his creation shut down by the coffee company in 2015. San Francisco was in a huff over the closures. Rigo found new financing and reopened a few of the locations, which continue to be popular and successful. 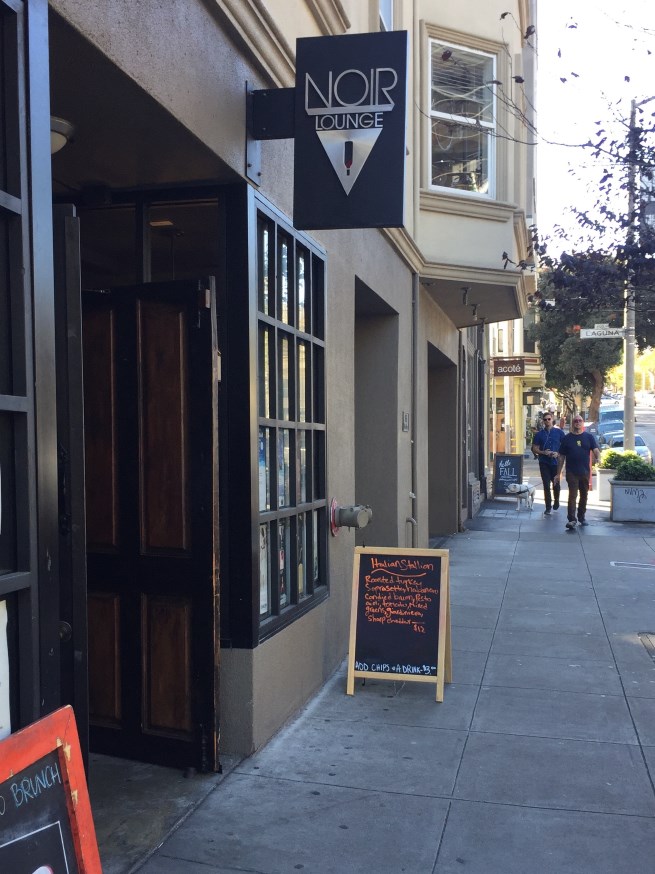 Moving westward along Hayes is a variety of stores and hangouts, including Noir Lounge, where a full bar, “shared plates” and salads are available until 1 a.m. It has a French look and feel with a zinc bar, floor length red drapes, chandeliers and a mixture of modern and romantic art, plus photos of scenes from the movie Casablanca. It’s the only place I’ve seen where the TV screen playing a sports channel has a three-inch, ornate gold frame around it. Modern entertainment jamming in an antique box. 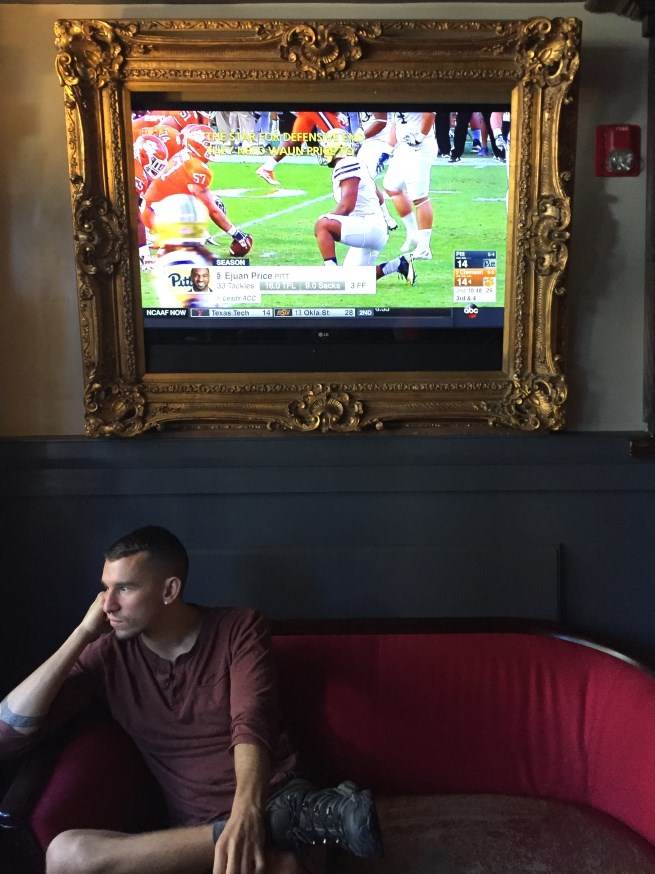 Public Bikes is a popular place to purchase simple, practical bikes that are designed to transport the rider around the city safely. Like many cities in France, San Francisco has bike rental locations, but they are mostly found in the financial district to help commuters, and in tourist areas. San Francisco apartments may have a little more room to store a bike, so many residents own one.

Neighbourhood restaurant Petit Crenn offers food with a Brittany twist, inspired by Chef Dominique Crenn’s Breton grandmother and mother. Reservations are not required at the bar.

Heading back toward Patricia’s Green and eastward is Chantal Guillon where visitors are greeted by a macaron counter that would rival Ladurée and Pierre Hermé in France. The cookie is the same formula – a ganache filling between two almond-base meringue cookies – but Guillon offers seasonal flavours such as black mint for Halloween, pineapple, chestnut, hazelnut yuzu or a Thanksgiving pumpkin pecan pie. Mais oui, there are vanilla, chocolate and many fruit flavours for traditionalists. 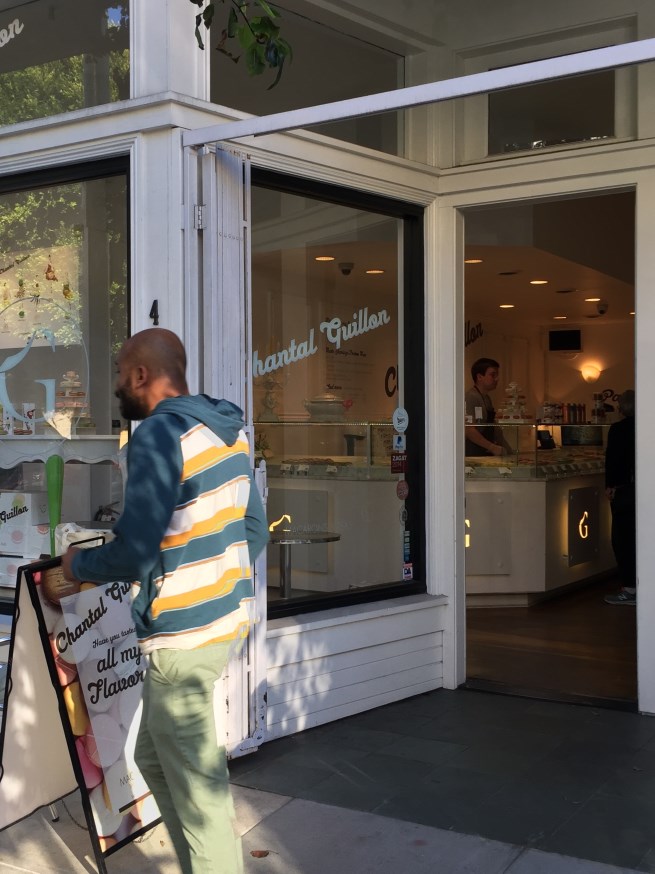 A touch farther down is Gough Street. Its corners are busy with restaurants Chez Maman and Absinthe Brasserie & Bar. Chez Maman reminds eaters to “finis ton assiette” (finish your plate), just like we all heard from our moms. High-end Absinthe offers caviar, foie gras, steak tartare and coq au vin for dinner, but lighter fare for lunch. Oversized French posters selling absinthe surround the tables. Both restaurants have their sidewalk tables full of customers with their children and/or dogs, adding to the busy French street feeling. 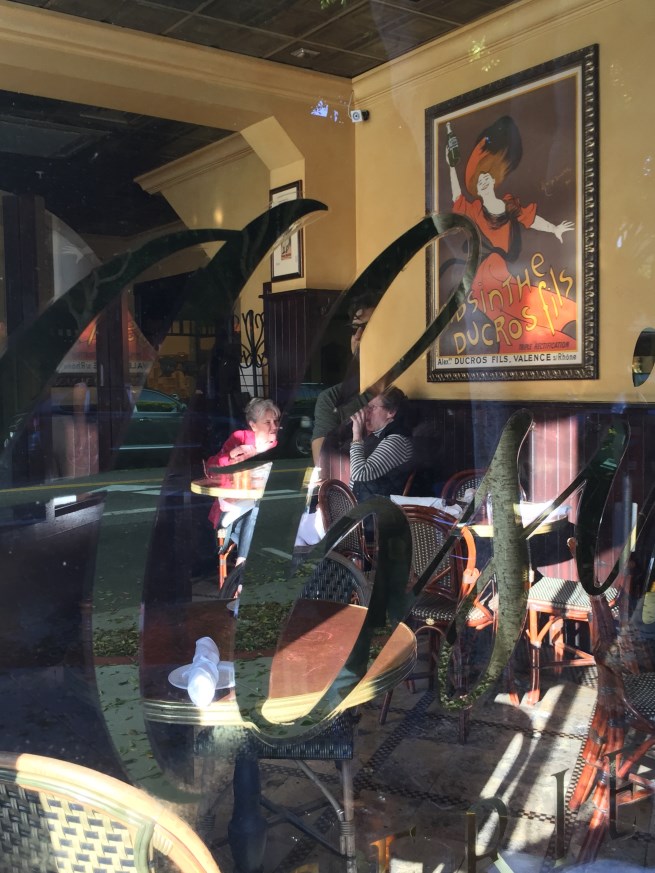 French absinthe posters decorate the walls of Absinthe Brasserie & Bar on the carrefour of Gough and Hayes. Photo: Martha Sessums

Shops along Hayes include Amour Vert, claiming to be “French-inspired but American made.” Other clothing shops with San Francisco/France-inspired selections dot Hayes and Gough, too many to list. 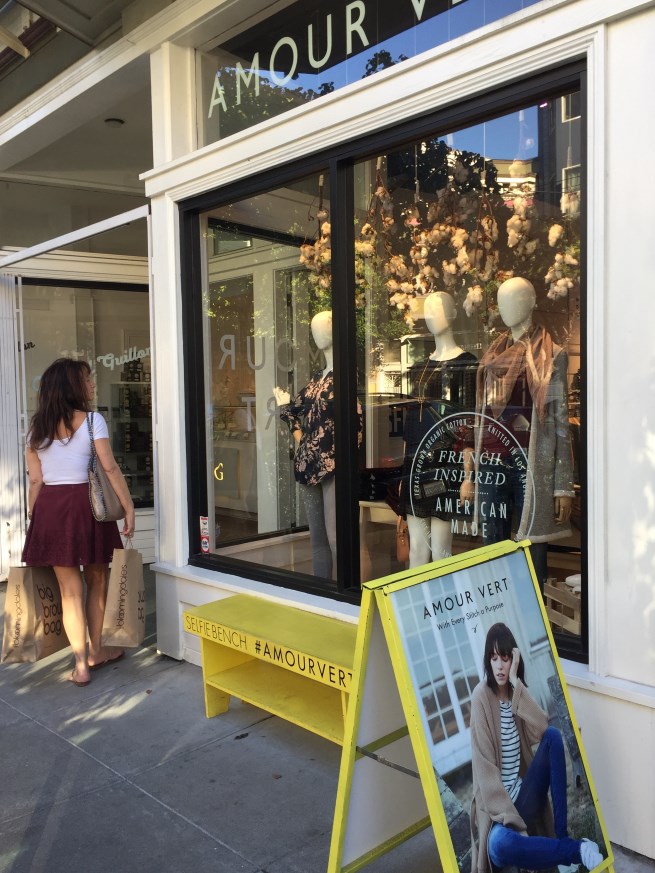 The energy in the carrefours of Hayes/Gough and Hayes/Octavia reflect the vibe of many cities in France. Like the carrefour Le Carreau du Temple and Rue de Picardie in Paris’s third arrondissement, or Rue Monge near Place de la Halle in Beaune, this San Francisco double carrefour reflects a lively community spirit – especially while eating a pumpkin pecan pie macaron.

All images by © Martha Sessums