The Carrefours of France in San Francisco: Bush and Grant 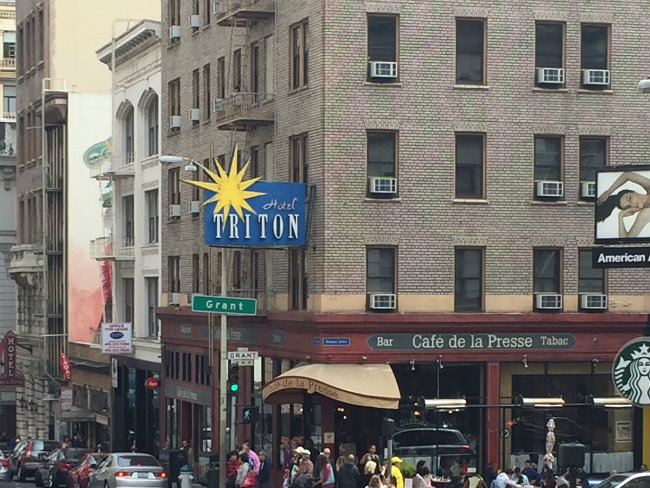 During the 1849-50s Gold Rush, many French people came to San Francisco to find their fortune. It was San Francisco that grew rich with the addition of French culture, and that continuing influence is seen today from many intersections, or carrefours, in the city.

The carrefour of Bush Street and Grant Avenue speaks French, Chinese and San Francisco in a hubbub of cars, restaurants, hotels, retail shops, a church and a dragon.

The original name for Grant Avenue was Dupont Street, and it was the main drag of the French Quarter of the 1850s. The enclave paralleled Chinatown, and included what is now two rows of three blocks bordering the Union Square area, down to Montgomery and over to Stockton. Or thereabouts. 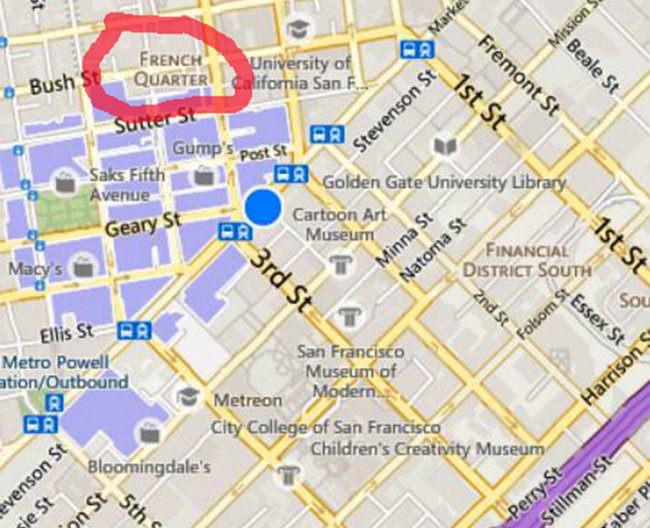 Map illustrating the carrefour, or intersection, of Bush and Grant in San Francisco. © Nokia, Microsoft

The green Dragon Gate arch that marks the Grant entrance to Chinatown dominates the carrefour. Its low, two-tiered, pagoda-style, green tile roof stands out like a midget between two large buildings. You can’t miss the fierce dragon curled along the top, the fish and roof animals jutting from the roof rims, and large lion statues on each side of the concrete base. The big cats are there to thwart evil spirits. 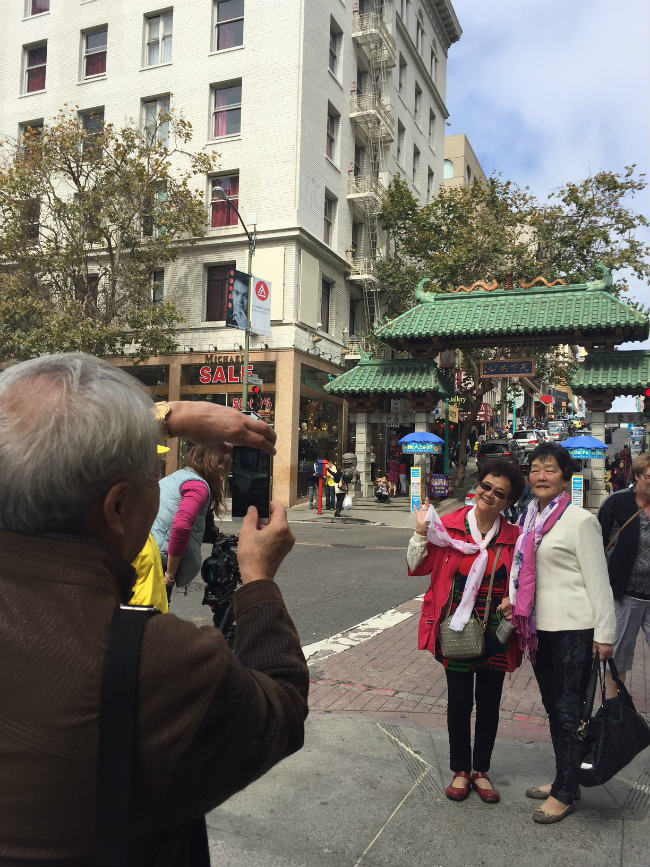 But then the carrefour gets very French. Just a half block from the Dragon Gate on Bush is the Église Notre-Dame-des-Victoires. This chapel-sized church was built in 1956 to commemorate the centennial of Paris’s famous Notre Dame. Citizens of French ancestry in the Bay Area raised the funds for construction. The church’s center arched aisle is a mini-Notre Dame, and services are conducted in French. 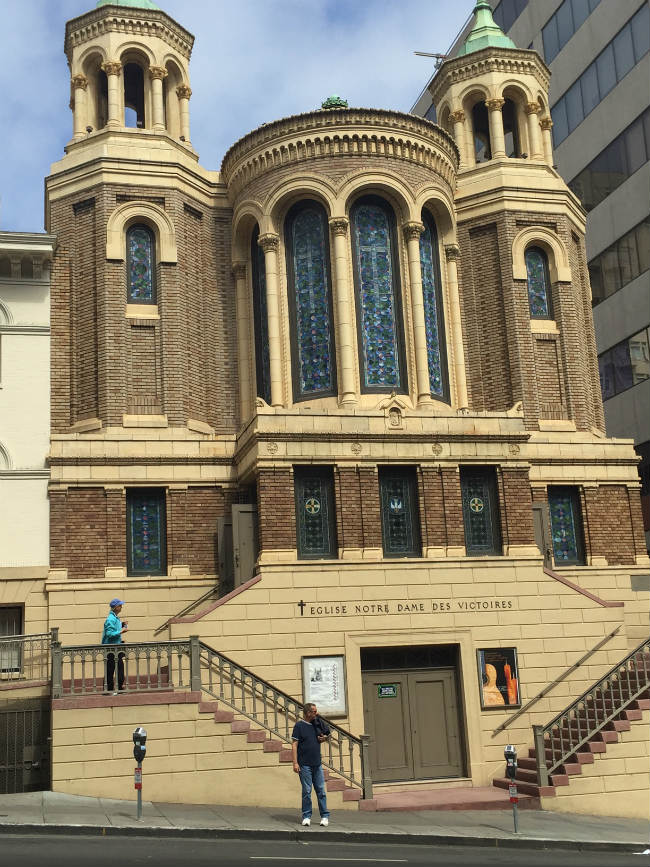 The southeast corner of Bush and Grant could almost be a carrefour in any number of French cities, showcasing French-style hotels, restaurants and retail stores. The oldest French bistro in San Francisco, Le Central, has a sign outside that lists the number of days the cassoulet has been cooking. On my last look, it was 15,018 days, or more than 41 years. 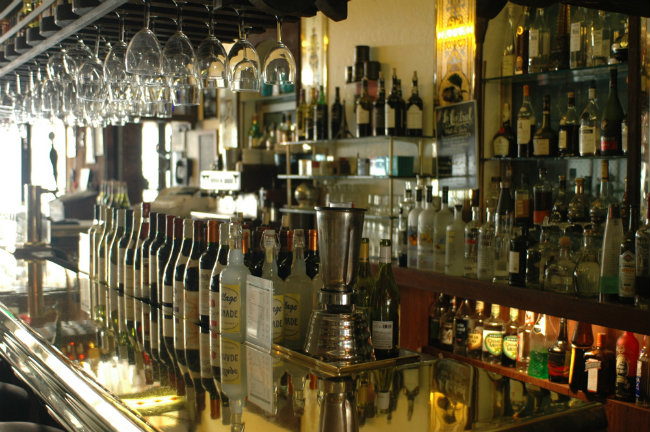 The cassoulet started cooking when the bistro opened in 1974 by Pierre and Claude Cappelle who, according to current co-owners Melanie Tanphanich and her uncle Paul Tanphanich, chose the location because of its proximity to the financial district, the French consulate and the church of Notre Dame des Victoires. The French Consulate has moved a block over to Kearney Street near Market Street, but the French influence continues. Le Central attracts San Francisco’s political elites, including an ex-mayor (often at his reserved window seat looking out over Bush) and many business and social leaders who enjoy the cassoulet.

Next to Le Central is the Hotel des Arts. This boutique hotel showcases contemporary works of emerging artists from around the world. Graffiti, street art, contemporary – it all highlights the diversity of the city location. 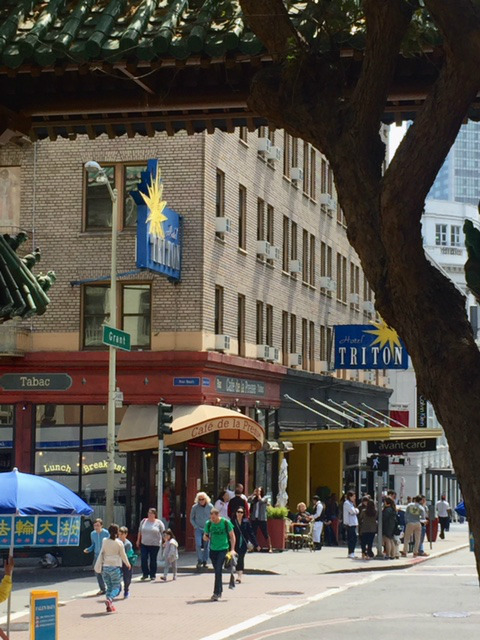 Café de la Presse is a French restaurant that dominates the corner of Bush and Grant. Sidewalk tables line the restaurant and are full– come fog or shine. Waiters dress in white shirts and black vests with a white apron over black pants, looking like many waiters in France. The menu offers both Croque Monsieur and Madame, along with Salade Niçoise, Steak Frites, Foie Gras au Torchon and many other traditional French foods. There is also a newsstand loaded with French and British news, cooking and travel magazines, including France Today. 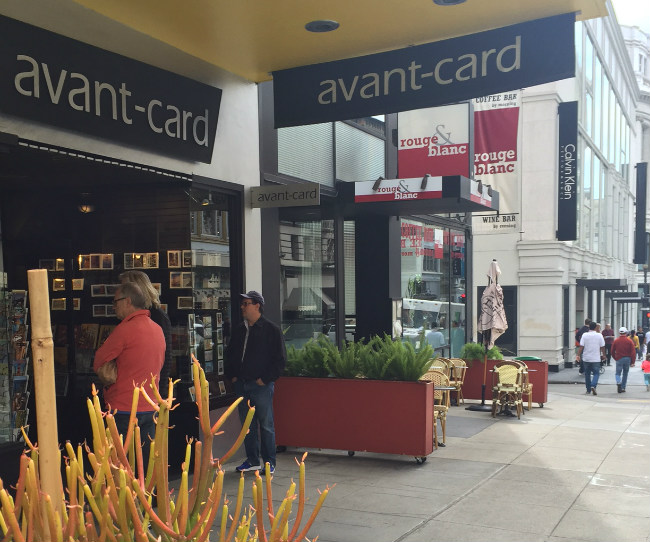 Next to Café de la Presse is Avant-Card, a stationary and card store. Despite being located in San Francisco’s high tech hub, this old-school store makes sending a card or postcard– and writing letters and in journals– very cool. The cards are mostly in English, but some are in French, and they are funny, touching or personal, with beautiful illustrations and photos. Journals and stationary are stylish, often with illustrations of Paris scenes. Books about French fashion are also available. You’d think you were in a boutique stationary store located on Rue St. Martin in the 4th arrondissement. 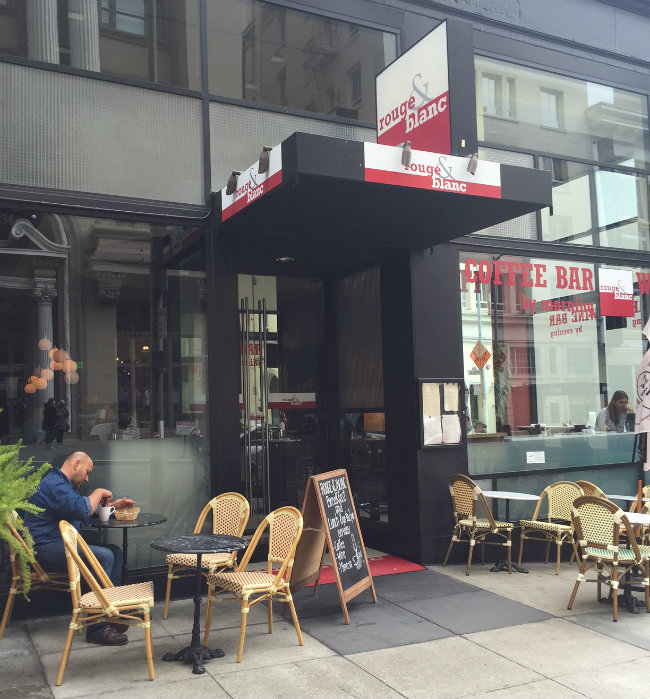 If you need to sign and address the card you bought, step next door to the Rouge & Blanc café where you can enjoy a glass of wine or cup of coffee. The wine bar also offers whisky and cocktails, and has tables inside and out. Again, available in fog or shine. Relaxed and comfy, it is a place to be by yourself, or meet friends and co-workers. Like many wine bars in France, and you can sit there as long as you like. 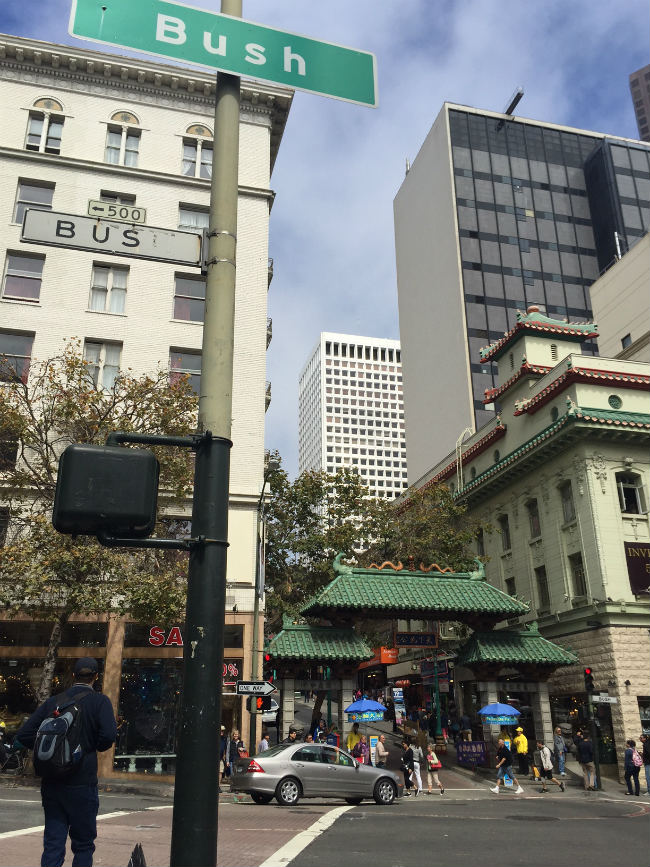 The intersection of Bush and Grant in San Francisco. © Martha Sessums

Located above Café de la Presse, Avant-Card and Rouge et Blanc is the carrefour’s second hotel – the Triton. Opened in 1913, the hotel is known for its “boho chic style,” and features art from local artists in the rooms and the lobby, which opens on Grant. The hotel often has art shows, or vernissages, to highlight the artists and connection to the community.

According to Melanie and Paul Tanphanich of Le Central, the key influence of the carrefour of Bush and Grant is the Church of Notre Dame des Victoires. But if you prefer to have a coffee while reading “Le Parisien” newspaper, or sip a glass of Sancerre while writing in a journal adorned with illustrations of Paris icons, you can’t get much more French than San Francisco’s carrefour at Bush and Grant. 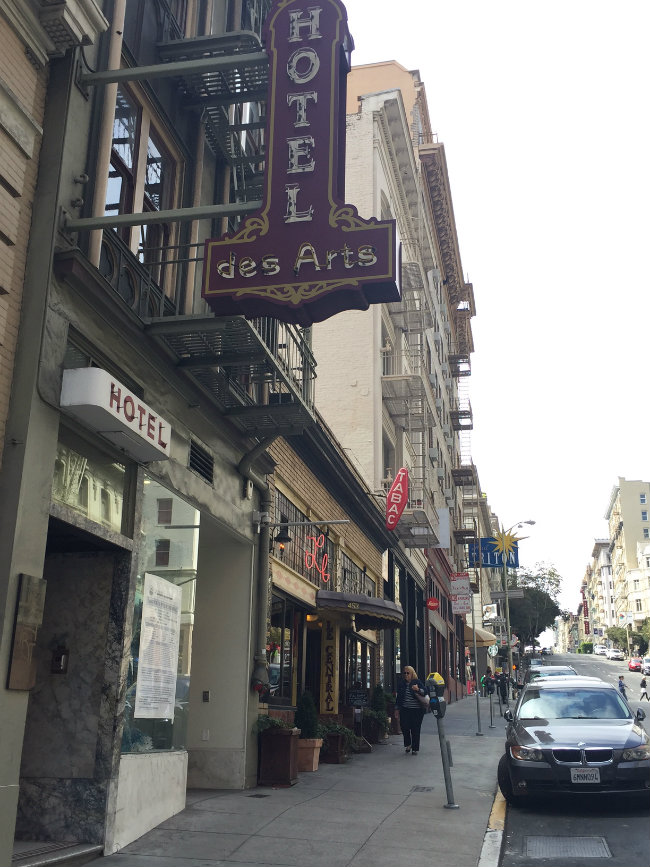 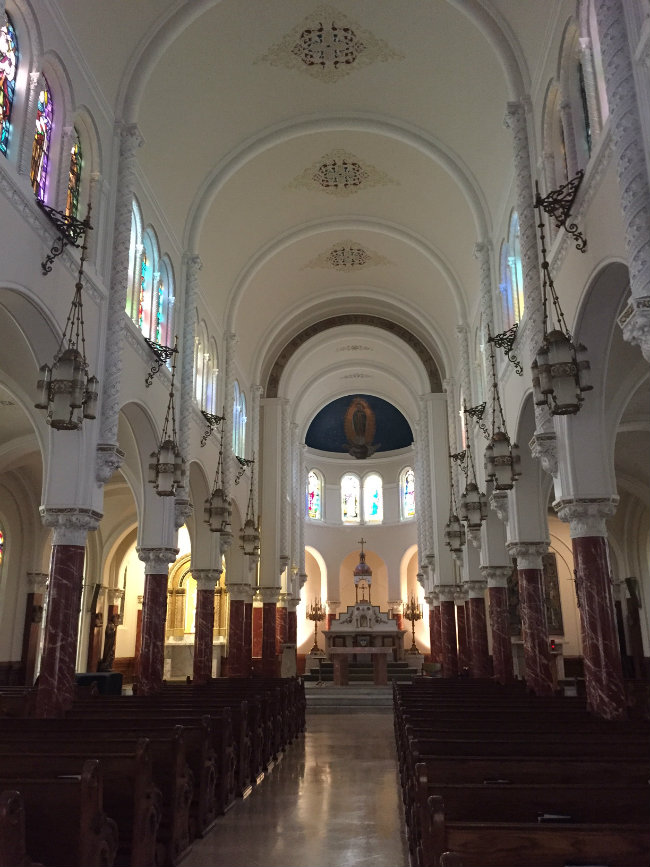