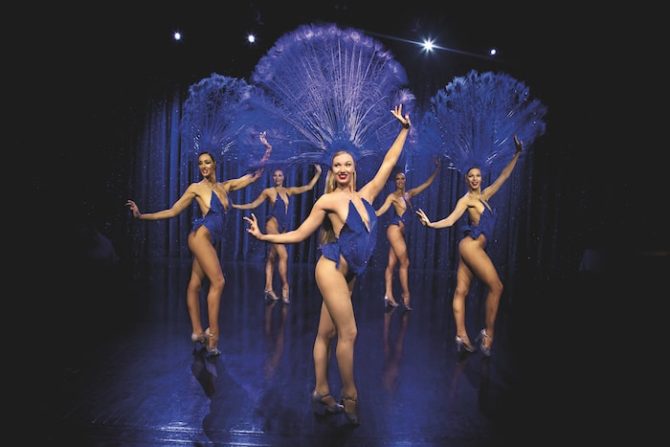 Theadora slaps on leggings and drags her unsuspecting sister to the Lido’s Bluebell Boot Camp. Synchronised dance may not be Theodora’s wheelhouse but she did the Lido’s limber Bluebell Girls, above, proud.

Honestly, I didn’t get the jitters until after my sister Wendy had photographed the Arc de Triomphe and we’d started heading down the Champs-Élysées to the Lido de Paris. It was Friday, so the wide promenade was already packed with weekend tourists. Juggling a little bag of sour cherry gummies I’d brought for a quick fix, I glanced once more at the instructions sent by the Lido a few days before: “The class starts at noon, so please arrive ten minutes early. Bring leggings and athletic shoes”.

Then it hit me. There was no mention of a top or sports bra. Wait. Stop. Would I? Could I strike a warrior pose sans shirt? This was the Lido, after all. At this point I still hadn’t given Wendy the complete lowdown on the Lido Bluebell Boot Camp I’d signed us up for – only the bit about yoga. Perfect for shaking off jet lag, I’d told her. In the wee hours that very morning, she’d arrived at Charles de Gaulle Airport for another Brack sisters bonding trip, and it had been my plan to reveal our agenda over coffee. But I’d lost my nerve. Besides, I wanted the choreography component to be a surprise. What she didn’t know couldn’t scare her away, right?

We entered the Lido. As a historic building fanatic, I never pass up an opportunity to explore one, especially an old Parisian theatre. And this one did not disappoint. Floor to ceiling, the walls flaunted tiny golden tiles. Fluffy white swans contrasted with all the gold. By the light of crystal chandeliers, we crept in our sneakers from the glittery lobby to the reception desk, met the boot camp coordinator and, much to my relief, were handed T-shirts.

“Don’t worry, the large will fit like a small,” our host said. “After you change, we’ll gather for yoga on the stage. You’ll do fantastic!” Pumped up by her pep talk and now in our official fitted Bluebell “rehearsal shirts”, we joined the other participants on the actual blue Lido stage, still scattered with sequins from the previous night’s performance. Here we were, a dozen women of all ages, bonding and giggling as dancer Kate guided us through the yoga session. 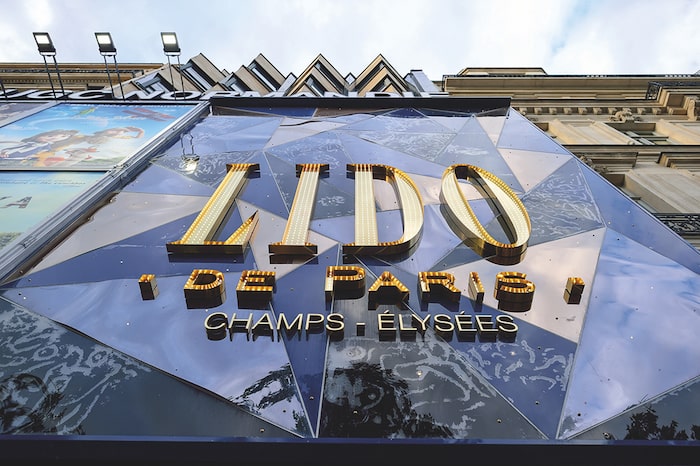 “Key light!” shouted instructor Victoria, waving us into formation. Wendy looked my way. I gave her a little shrug of surprise as we claimed two spots at the very rear. Taking it from the top again and again, we struggled to memorise, a few steps at a time, one of the routines from the Lido’s Paris Merveilles extravaganza by director Franco Dragone.

I won’t lie to you. Synchronised dance is not exactly in my squeal house. At random moments, though, I somehow hit my mark, making the steps and gestures called for in the choreography. The “You naughty boy!” finger-wagging move with left hand on hip is one I’ll certainly add to my routine at home (with the cats). I glanced over toward Lil Sis, hoping to get an approving nod, but she’d already stepped out of our comfort zone. In fact, after taking big strides, Wendy was now out in front, not only slaying the complicated step sequences, but giving smiles of encouragement to the other dancers, spurring us all to beam even brighter.

Inspired by her fearlessness, I decided to just let it go, free-styling all the way, of course. With hands a-fluttering and legs a-strutting, I left it all on the stage. Later, our feet were so sore we could barely walk – but oh, did we laugh. We’d not only gotten to tread the boards of a legendary theatre, but had shared a 24-carat moment – one we’ll boast about for years, I’m sure.

As Margaret Kelly, founder of the Lido’s Bluebell dancers, once said: “We want girls with expression. If they don’t have a special alive expression, they won’t do”. Well, at least I’ve got the expressive “dancing to her own dope beat” part down.