Slowing the Pace of Life in Aix-en-Provence 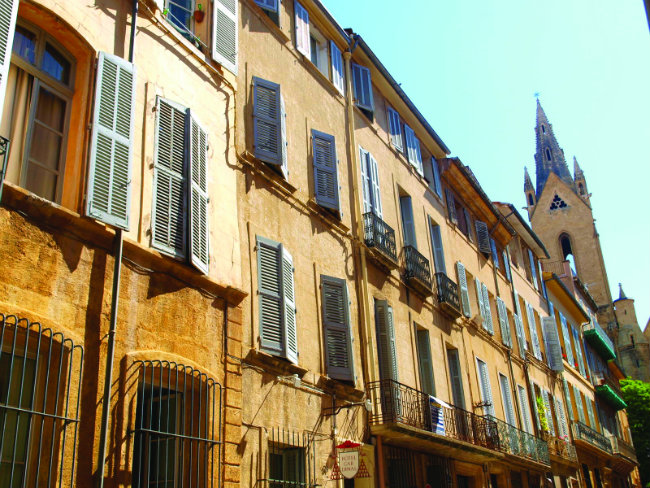 We all love the fact that life in Aix-en-Provence is lived at a slower pace, but this doesn’t always happen because of a conscious lifestyle choice. It often is a consequence of this medieval capital of Provence having expanded to respond to immediate needs without knowing what the future would bring.

I was confronted with this problem years ago during my first practical encounter with the quartier Mazarin. I needed to pick up some big pots of paint from a decorator in Rue Frederic Mistral. As I squeezed my little car up the narrow one-way street, I saw there was no place to park, or even pull over. After considering my options – park far away and carry the pots, or simply block the traffic – I nervously stopped the car in front of the shop, ran in, threw the paint in the back and waved apologetically at the driver waiting behind me. If I were a true Aixoise, however, I would, of course, have taken my time, chatting to the shop owner, unflustered by the honking cars outside.

Ironically, the quartier Mazarin was the first “planned development” in Aix. When the capital of Provence was bursting its seams in the 17th century, the newly appointed Italian-born Archbishop Michel Mazarin was granted permission to develop church land to the south of the existing town and its crumbling ramparts. Architect Jean Lombard created a grid of perfectly straight streets around the Benedictine convent that later became Émile Zola’s high school, the Lycée Mignet.

The new quartier allowed the gentry of Provence to build elaborate townhouses, with walled courtyards in front and formal gardens at the back, all in the fashionable Italian style. Over the next century the neighborhood was filled with these hôtels particuliers. One of the best examples is the magnificently restored Hôtel de Caumont, which until recently housed the town’s music conservatory, but is now a beautiful small museum.

The streets were wide in the Mazarin – or at least they were compared to the old town – so that carriages could pass through, but today they only allow for narrow sidewalks. Most of the wealthy inhabitants of the quartier also owned country estates, where they spent most of their time. In town, life was lived behind high walls, away from the public eye.

And it still is. Over time the mansions were mostly divided into apartments and offices for doctors, lawyers and upmarket estate agents. To the outsider this part of Aix does not seem suited to modern city living – no parking, no supermarket, precious little outside space. This, however, has not stopped the Mazarin from being the chicest part of town, with well-heeled Aixois living their lives in elegant apartments behind the imposing façades and intricately carved front doors.
The inconveniences, though frustrating, in fact create the very conditions that make the quality of life here so high. They are why there are still daily farmer’s markets in the centre of Aix and why people walk around town running their errands, stopping to chat to friends rather that jumping in their cars to drive out of town and shop at the nearest Carrefour hypermarket.

And as frustrating as it can sometimes be, this way of life is why people keep coming here, and why so often they never want to leave.