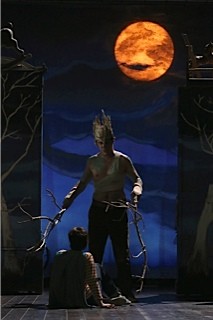 This article is the second in a series on the 2012 Aix festival. Read the previous article in our Culture section.

The young cast and crew of the Festival’s new production of Maurice Ravel’s L’Enfant et les Sortilèges (The Child and the Magic Spells) looked delighted and slightly astonished last night as the audience in the jewel-box Jeu de Paume theater applauded them back onstage for nearly a dozen well-deserved curtain calls, and rightfully so. Director Arnaud Meunier’s new staging of Ravel’s one-act opera, in a chamber version produced in conjunction with the Festival’s European Academy of Music, is a sheer enchantment—musically, vocally and visually.

Ravel’s little masterpiece originated in 1919, when the director of the Paris Opera invited novelist and music-hall performer Colette—author of Gigi and known for her scandalous bisexual attachments—to write a libretto for a fantasy ballet. She delivered it in little more than a week and, given a choice of composers, decided on Ravel, who accepted the commission, suggested an opera rather than a ballet and then lallygagged in getting down to work. By the time L’Enfant finally made its debut, at the Monte-Carlo Opera in 1925, Ravel had enlarged its scope, scoring the 50-minute work for a full symphony orchestra and chorus, with choreography by George Balanchine.

In 1989, French composer and pianist Didier Puntos, at the time choral director of the Lyon Opera, adapted the score for a chamber ensemble—fourhanded piano, flute and cello. The delicate adaptation has since toured the world, with nearly 300 performances tallied so far; this production is the first for the Aix Festival, with Puntos himself at the piano along with Michalis Boliakis, a former student of the European Academy of Music, Anne-Lise Teruel on flute and cellist William Imbert.

The story, which Colette originally entitled Divertissements for my Daughter, is not so much an entertainment for children as a poetic reflection on childhood; it begins with a young boy daydreaming of naughty deeds instead of doing his homework. Scolded and confined to his room by his mother, the boy erupts in a fit of childish rage, breaking furniture, teapot and teacups, dismembering his teddy bear, tearing up the pages of a storybook. Suddenly the scary apparitions begin: chairs that he overturned come alive to turn the tables on him, a caged squirrel he tortured threatens revenge, the dreaded Arithmetic makes a multiple appearance wielding terrifying rulers, his beloved fairy Princess reproaches him for destroying the pages of her book, condemning her to never know how her story ends. It’s all enough to make even a petulant child remorseful, and frightened enough to cry Maman!

The single set here, by designer Damien Caille-Perret, is a splendid attic filled with dark corners, menacing stacks of furniture and a towering stuffed giraffe. The frightful series of angry creatures, from dragonflies and frogs to talking trees with twisted-tentacle branches, taunt the boy each in their own rhythms—classic, jazz, atonal, Spanish, Oriental. The costumes, masks and wigs by Anne Autran are joyously fantastic and occasionally racy—the English teapot, in boxing gloves and shorts with an enormous protruding spout, flirts with a generously endowed Chinese teacup, while a blonde, hot-tin-roof sort of a sex-kitten in a white satin slip purrs away with an amorous long-tailed black cat.

Soprano Chloé Briot, as the child, leads an ensemble cast of seven other singers playing a total of 18 roles: sopranos Mercedes Arcuri and Clémence Tilquin, mezzo-sopranos Majdouline Zerari and Eve-Maud Hubeaux, tenor Valerio Contaldo and baritones Guillaume Andrieux and Jean-Gabriel Saint-Martin. The names are worth noting, because, judging by their performances here, they are all facing a bright future.

Previous Article Paris for Men
Next Article The Medieval Loire