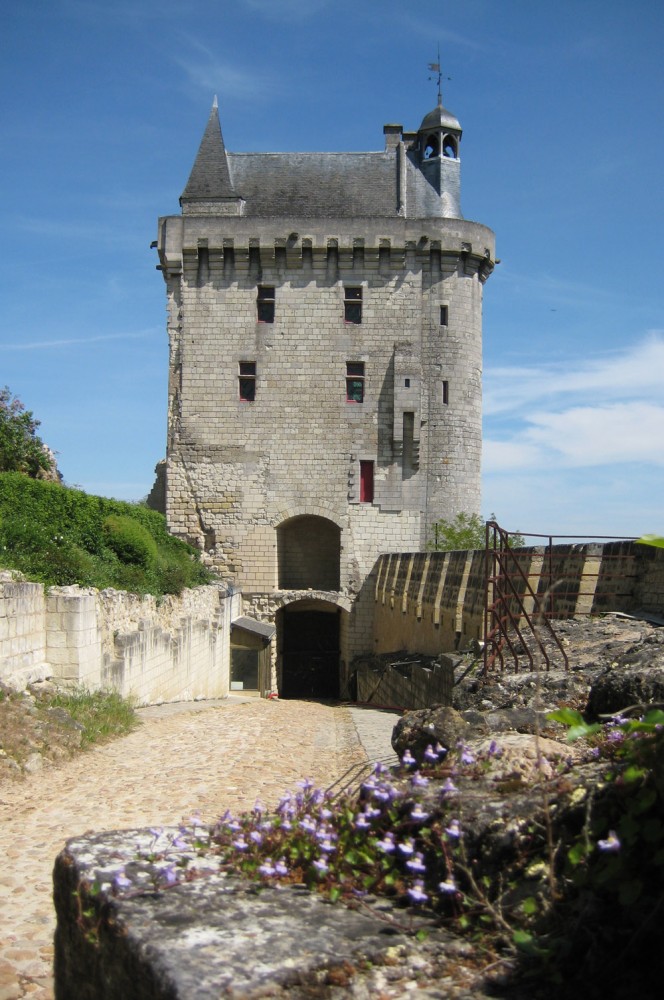 At first glance, the 92-foot-high castle keep of Montbazon may appear to be just another of the many medieval fortresses found throughout the French countryside. But it’s no ordinary pile of stones. Built between 991 and 996, the fortification is believed to be the oldest intact castle in France. Encircled by encroaching woods, today its 12th-century defensive walls seem to be under assault, not by armored knights wielding swords and poleaxes, but by a sylvan army of lilac and coppiced hazel. The smell of box and lavender emanates from the medieval garden at the foot of the keep, or donjon in French. And if you listen carefully while standing in the shade of the mighty oak on the eastern side, you can hear the murmur of the river Indre as it threads its way through the green fields surrounding the village.

If the Château de Montbazon today is a vision of serenity, its very existence is solid evidence that there was as much medieval mayhem in the Loire Valley as there was Renaissance refinement. Struck by lightning in the 18th century—witness an angry scar slithering down its side—the keep has endured several bloody sieges, municipal orders for its destruction and prolonged periods of neglect. Since the 19th century it has even been the improbable, monumental pedestal for a ten-ton statue of the Virgin Mary. But, all things considered, the donjon wears its thousand-plus years remarkably well.

The fortress castle was built by the Count of Anjou, Fulk III Nerra (970–1040), known as the Black Falcon—a truly fascinating character who’s largely been forgotten, but whose historical footprints are scattered all across the Loire Valley and beyond. More than any other historical figure who strode the castle halls of Montbazon, it’s the ferocious Fulk (or Foulques in French) who provides much of the color—mainly purple, from his frequent rages, and crimson from the prodigious quantities of blood spilled as he forged the beginnings of the Angevin Empire that would one day stretch from the Pyrenees to the Scottish border.

In 2003 the privately owned fortress opened its doors to the public for the first time in its long history, following years of restoration work by its former owners Harry Atterton and his wife Jacqueline. Originally from Yorkshire, the silver-haired and affable Mr. Atterton is an eloquent if unlikely advocate for the incredible Fulk, and he seems to fully appreciate the irony of being an Englishman educating the French about a legend from their own history.

“Fulk is a forgotten giant of French history—and, I would argue, English history as well,” he says. “He’s in the genealogies of every royal house in Europe—including the House of Windsor. He can even be considered one of the fathers of England because there is a clear link between the geopolitical unit he created in Anjou and the development of the English nation. I was amazed to discover that someone so important remains so little known outside the region.”

Atterton makes a compelling case that the little-known Fulk has the same right to a place on the historical map of medieval Europe as William the Conqueror, Henry II Plantagenet or Richard the Lionheart—all part of Fulk’s bloodline. Indeed, blood—particularly the shedding of it—was a recurring theme in Fulk’s life. He may even have been responsible for poisoning William the Conqueror’s father, thereby setting into motion the series of events which ultimately led to the Norman conquest of England in 1066.

When Fulk wasn’t busy murdering or defeating his regional rivals in pitched battles, burning his first wife at the stake or traveling to the Holy Land to seek atonement for his hefty catalog of sins, he was commissioning more than 50 fortifications and religious edifices throughout the Loire Valley. A surprising number of them have survived more or less intact, but Montbazon is one of the best preserved and most dynamic, offering visitors guided tours, mysterious subterranean passages to explore, crossbow practice and medieval summer fairs.

A 40-minute drive from Montbazon, the Royal Fortress of Chinon is situated at the junction of Anjou, Poitou and Touraine, surrounded by the rolling vineyards made famous in the satirical tales of Rabelais, who was born nearby. Like a time-battered clifftop Camelot, the hulking fortress overlooks the river Vienne and the medieval town of Chinon.

The enormous scale of the château-fort is best appreciated from the opposite side of the Vienne. Almost entirely surrounded by ramparts, the fortress is an architectural ensemble comprising two forts—Fort du Coudray on the west, Fort Saint Georges on the east—and the Château du Milieu in the middle, with the thin Tour de l’Horloge (Clock Tower) jutting out like the rounded prow of a ship. With the advent of the Renaissance the outdated fortress fell into disrepair, and was left for centuries in its partially ruined state. But in 2005 a bold project was designed to restore parts of the complex to their medieval splendor, and the site officially reopened to the public in 2010. “The Royal Fortress of Chinon is the lone masterpiece of medieval military architecture among the many Renaissance residences of the Loire Valley,” says Marie-Eve Scheffer, archaeologist and director of the fortress. “The ambition for the restoration has been to preserve and promote this exceptional heritage while respecting the spirit of the place.”

There are certainly spirits aplenty to be respected. In the 12th century, the fortress was the epicenter of the Angevin Empire created by Fulk Nerra, and part-time home to the most famous beneficiaries of his prowess: Henry II Plantagenet, Count of Anjou and King of England; his formidable queen Eleanor of Aquitaine; and their squabbling progeny Richard the Lionheart and John Lackland, known in France as Jean Sans Terre.

The fortress served as a backdrop for much of their family drama, vividly evoked in the 1966 Broadway play The Lion In Winter (later made into a film starring Peter O’Toole and Katharine Hepburn). And it was here that Henry’s tumultuous 35-year reign ended. Chased through the Loire Valley in 1189 by the young and wily king of France, Philippe Auguste, and his own son Richard the Lionheart, Henry was forced to surrender at Chinon. He was shown a list of the nobles who had joined the rebellion, and is said to have died of a broken heart upon learning that his favorite son John was among them. A modest plaque in the grassy courtyard of the Château du Milieu, under a respectfully bowing acacia tree, marks the spot where the indefatigable Henry died.

Henry, Eleanor and Richard are buried just a few miles away in Fontevraud Abbey. Some 15 years after Henry’s death, and five years after Richard’s ten-year reign came to a violent end, leaving the feckless John Lackland on the throne, Philippe Auguste returned to Chinon and captured it irrevocably for France. Philippe Auguste also left his mark on the fortress, notably in building the cylindrical Coudray keep. Today, inside the newly restored tower, a series of dimly lit stairways lead visitors deeper and deeper into what served as both an ice room and a dungeon. Among its important prisoners were a group of Templar Knights and their last Grand Master, Jacques de Molay, who was held here in 1308 before being burned at the stake in Paris. In the quasi-darkness and bone-penetrating cold and damp, the Knights made cryptic carvings on the dungeon walls that are still clearly visible today.

From the Old Town of Chinon, with its half-timbered houses and limestone manors garlanded in wisteria, a cobblestone path leads today’s visitors up to the fortress entrance. Called the rue Jeanne d’Arc, the steep, snaking cobblestone route is the same one taken by the Maid of Orléans in 1429 when she was summoned to meet the Dauphin, the future King Charles VII. Inside the fortress, the ancient bell—forged in 1399 and known as the Marie Javelle—still tolls the hour, the very same metallic clang that once called Joan of Arc to prayer.

After the debacle of Agincourt and decades of humiliating reversals fighting the English and their Burgundian allies, the French were in a desperate position. The Dauphin was holed up in Chinon with the itinerant French court when news arrived of the young woman from Lorraine who claimed to hear the voice of God asking her to push the English out of France. After being interrogated in town for two days by the Dauphin’s skeptical advisers, the 17-year-old Joan of Arc was finally granted a royal audience.

The meeting marked the fortress’s high point as a French possession, but the roots of its decline are found in the Dauphin’s architectural addition, the Royal Lodge. Now a museum, the Lodge was designed as a residence purely for the comfort of the court, a harbinger of what the Loire Valley soon became: an aristocratic playground with residential palaces of eye-popping grandeur but zero military utility. With a splendid view overlooking the town, the river and the lush pastures of the valley, the prince was free to contemplate his complex destiny in considerable luxury, while Joan did bloody battle to put him on the throne.

But bloody battles were not the only way medieval events in the Loire Valley shaped modern France. Twenty minutes from Chinon, the château of Langeais played host to a pivotal royal marriage that brought fiercely independent Brittany kicking and screaming into the French fold.

Fairytale Langeais castle was built in 1465 for Louis XI—son of Charles VII—and the transition from medieval to Renaissance is clearly reflected in its construction. In spite of many feudal hallmarks—drawbridge, dry moat, a crenulated parapet walk—the mullioned windows and sumptuously furnished rooms with inglenook fireplaces suggest the castle was also built with style and comfort in mind. Louis intended it to be a bulwark against the threat of an invading Breton army—the independent duchy of Brittany had long been a thorn in the side of France. But a generation later the threat of invasion ended with the stroke of a pen.

On December 6, 1491, in what is now called the Wedding Hall, Charles VIII—son of Louis XI—married a reluctant Anne de Bretagne, the 15-year-old duchess of Brittany and the wealthiest female in Europe. Mirroring the wish of her fellow Bretons to remain independent of France, Anne is said to have brought two beds with her to Langeais. The wedding did not result in Brittany’s immediate annexation, but the marriage contract stipulated that if Charles VIII died without a male heir, Anne would marry his successor, his cousin Louis XII, which is indeed what happened, effectively setting into motion a series of events that led to Brittany’s absorption into France in 1532. Anne and Louis XII had no male heir either, but their daughter Claude, duchess of Brittany, married the next in line to the French throne, François I.

By the time Anne died in 1514, the Renaissance was in full flower in the Loire Valley. Just two years after her death, the mansion of Clos Lucé near Amboise—bought for her by Charles VIII, where she spent much of her time—was given by François I to the elderly Leonardo da Vinci, who spent his last years there.

Originally published in the May 2011 issue of France Today; updated in January 2012