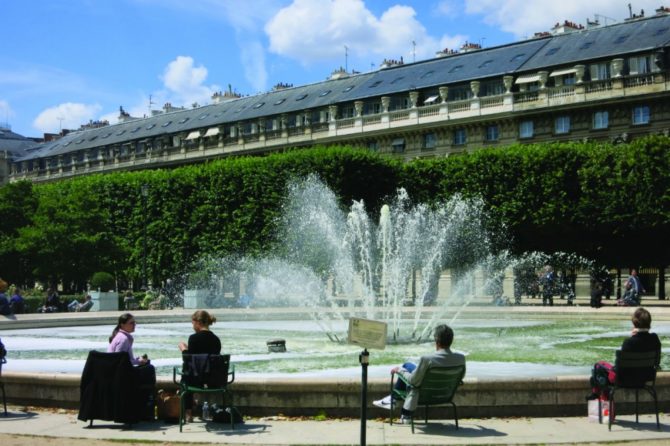 The serene Palais-Royal gardens remain one of Paris’s great discoveries. Hidden from view in the city centre, just behind the Louvre and the bustling Rue Saint-Honoré, the hushed arcades and sleepy gardens are like nowhere else in Paris.

Astonishingly, the Palais-Royal also seems relatively undiscovered. Once past its first inner courtyard – Place Colette, the setting for Daniel Buren’s site-specific contemporary sculpture – one has the feeling of having stumbled into another epoch. The gated arcades, manicured rows of linden trees and shop windows full of old coins, medals and silver cups that first greet visitors  only add to the impression, hearkening back to another time, when kings and emperors ruled and the lively Palais- Royal was the beating heart of Paris.

Home to the Comédie Française and the French Ministry of Culture, the Palais-Royal is the epitome of French elegance. Parisians come here to read quietly on a bench in the enclosed gardens or sun themselves on a lawn chair in front of the central fountain. Upscale cafés and restaurants offer coveted garden seating in the warmer months. And it’s a shopper’s paradise: everything from collectable music boxes, traditional French toys, made-to-measure gloves or eyeglasses, antique stamps and coins, vintage couture and high fashion ready-to-wear can be found here.

But this is nothing new. Palace it may be, but leisure, entertainment and shopping are in its very blood. The Palais-Cardinal was built by Cardinal Richelieu, who died three years after its completion, in 1642, leaving it to his royal patron, Louis VIII, who himself passed a few months later. It became the Palais-Royal when Louis’s widow, the regent Anne of Austria, and her two sons, five-year-old Louis XIV and three-year-old Philippe I, Duc d’Orléans, moved here, in 1643. The boy-King’s memories of running wild through the Palais-Royal gardens were the happiest of his wretched childhood.

Soon, an anti-royalist uprising – the Fronde – forced several terrifying and humiliating night-time escapes from the palace, forever prejudicing the young king against Paris, its unruly mobs and insurrections, and influencing his later decision to move his court to Versailles.

Upon Louis XIV’s death in 1715, his nephew, the notorious aesthete and rake Philippe d’Orléans, regent to the five-year-old King-to-be, Louis XV, lived and conducted affairs of state from the Palais-Royal. His taste for high living (and debauchery) well known, the duke made the controversial decision to open the gardens to the public and transform the Palace into a lavish setting for opulent dinners, masked balls, operas and other less savoury pastimes. Paris nightlife suffered only nominally when Louis XV moved the court back to Versailles. Abandoned by the nobles, what was left of Paris society enjoyed walks in the pretty gardens by day and more salubrious entertainments at night.

It wasn’t until 1781, when the impecunious Duc de Chartres, a cousin of the King, took over the property as a means to raise some ready cash, that the Palais-Royal hit its stride. It took the royal-turned-property-speculator only three years to transform the Palais into a libertine playground par excellence.

Architect Victor Louis, fresh from building the Grand Théâtre de Bordeaux, was tapped to redesign the palace and gardens – which remain very much the same today – adding Rue de Beaujolais to the north, Rue de Montpensier to the west and Rue de Valois to the east, and building a new inner structure with 180 arcades separated by Corinthian columns and illuminated by graceful hanging lamps. The arcades’ ground floor was reserved for shops, topped by two floors of generous apartments and an upper level lined with a balustrade and window boxes for domestics. The Comédie Française was given an elegant new theatre at the Palais’s west corner, which it still inhabits today.

Not only did the Duke indulge his own extravagant tastes, he anticipated those of the Paris bourgeoisie, his main clientele. Visitors with ready cash could buy pretty much anything in the arcade shops and dine at a dozen popular cafés and restaurants. Entertainments both innocent and illicit abounded – two theatres, an opera house, puppet shows, casinos, firework displays even a central racecourse. Gambling, thieving and prostitution were rife. By 1784 the Palais-Royal was a city unto itself, known only half facetiously as ‘the capital of Paris’. The nightlife here was famous (or infamous) throughout Europe.

The gorgeous Le Grand Véfour – still at its original spot along the Galerie de Beaujolais and still among Paris’s most celebrated restaurants – opened in 1784, ushering in a renaissance in French cuisine and counting among its regulars literary lions Victor Hugo, Flaubert, Turgenev, Zola, Flaubert, Georges Sand, Jean-Paul Sartre and painters Manet and Chagall among other Gallic luminaries. Drawings by Jean Cocteau, who lived at 36 rue de Montpensier, still decorate the menus.

The revolution didn’t much dampen the Palais’s spirits – the gardens were an excellent spot for radicals to circulate their pamphlets and harangue the crowds. The popular cafés of the Palais-Royal became centres of political intrigue and, despite his liberalism and a name change to Philippe Egalité, the Duke de Chartres fell under Robespierre’s blade in 1793.

The Palais-Royal changed little under Napoleon (who procured his first prostitute here) and the Restoration, but slowly returned to a dubious respectability toward the mid-19th century into the 20th, when the teenage Simone de Beauvoir took study breaks here from the nearby Bibliothèque Nationale. After World War 2, visitors to the garden hoped to catch a glimpse of their beloved Colette, by that time Paris’s most famous author, who wrote about her life in the Palais-Royal “provinces” while living at 9 rue de Beaujolais.

But like most everything in Paris, it unfolded in its own time, in its own way and mostly by word of mouth. If Lutens met a designer he liked, he might mention a space opening up. As he did when he recognised Jerôme l’Huillier one day in his shop. Nearly 20 years later, L’Huillier’s vibrant boutique (138-139 Galerie de Valois) is catnip for the international style set, who race to snap up his fluid, sexy styles.

The arrival of superstar brands hasn’t deterred smaller, single-boutique labels. If anything, they’ve brought the arcades a new caché, harmoniously coexisting with niche labels, like fourth-generation couture glove maker Maison Fabre (128 Galerie de Valois) and shoemaker Dessange, where elegant Parisians can choose from a range of luxury leathers for their custom-made shoes and bags. A nice contrast to acclaimed designer Pierre Hardy (156 Galerie de Valois), a few doors down, whose superchic shoes, bags and high-style sneakers are fashion-shoot regulars.

Across the way, avant-garde jeweller Vincent Avenches’s (43 Galerie de Montpensier) dreamily poetic pieces – a romantic cloud-sunburst broach or a gold-wire eye with a scarlet tear – recall the drawings of ex-resident Jean Cocteau. Other highlights along the Galerie de Montpensier: the sassy Maison de Vacances (No. 63-64), which specialises in colourful, irreverent housewares in yak fur, metallic leather and luxury textiles; Épice (No. 28), purveyor of luscious scarves integral to every stylish Parisian’s wardrobe, and Gabrielle Geppert vintage (No. 31-34), a sleek, modern counterpoint to the illustrious Dider Ludot’s vintage couture shop (No. 20-24), which opened in 1975 and is still going strong (his La Petite Robe Noire boutique is across the gardens at 125 Galerie de Valois).

Geppert, who lives and works at the Palais-Royal, has witnessed its transformation first-hand, watching as boutiques come and go. “Some make it, some don’t,” she says. “It’s all about love… if you love the Palais-Royal, it loves you back. In the end, it’s the Palais-Royal itself that decides who stays and who goes”.

The Italian-American designer, a scion of the Bottega Veneta luxury leather house, takes his inspiration from women’s “independence of spirit and passion for life”. Moltedo’s beautifully crafted, ultra-stylish bags in exotic skins and luscious colours combine his passion for music and fashion with a long tradition of expertise.

The wondrous scarves of Danish designers Bess Nielsen and Jan Machenhauer are set apart by their refined textiles, sumptuous colours, expressive designs and exquisite craftsmanship. This streamlined boutique acts as a backdrop for a gorgeous array of rainbow-hued scarves in blends of silk, linen, cashmere and cotton.

Gabrielle Geppert’s enthusiasm and delight is palpable in her boutique, with its choice selection of vintage jewellery, bags, shoes, clothing and housewares plus her own superchic designs. It’s the go-to place for the fashion cognoscenti as well as those seeking to augment their wardrobe or home décor with spectacular, one-off pieces.

The first couturier to pioneer the Palais-Royal, L’Huillier has been dressing the international fashion set since 1995. Known for his fluid, luxurious fabrics and joyfully exuberant colours, L’Huillier’s characteristic “frivolous glamour” draws clients for his youthful, meticulously designed ready-to-wear. Now there’s housewares, too.

This Palais-Royal newcomer’s boho-chic handbags have long been Parisian fashion staples. Chic, versatile, sturdy and fun, the bags feature reptile skin, supple leather and pony hide in surprising colours and metallics. The backpacks, hobos and totes have tons of pockets, while the small bags transition from daytime to cocktails.

Legendary for his rich, sensual fragrances, redolent of musk, wood and exotic spices and flowers, Lutens is the king of Paris niche perfumers. In 1992, he was also among the first upscale fashion boutiques to pioneer the Palais- Royal. His gorgeous, Beardsley-esque shop is a mecca for connoisseurs of artisanal perfumes.

Previous Article St Tropez: Another Side to the Côte d’Azur Glamour Spot
Next Article What’s on in Paris: The Saint Petersburg Philharmonic Orchestra