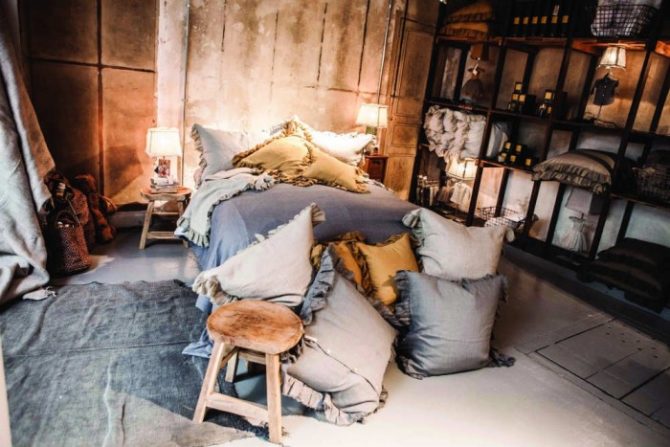 Just when we thought that ‘concept store’ saturation point has been reached, the wonderful, Naples-based Borgo delle Tovaglie arrives, proving once again that this retail genre just keeps getting better. Following in the footsteps of Merci and the new La Trésorerie, both of which are also situated in the chic Oberkampf neighbourhood, Borgo delle Tovaglie combines a restaurant with a stylish, two-level homewares store.

Like its two predecessors, Borgo is lodged in a picturesque old Paris building with tons of original touches – including skylights, old shelving, wooden cupboards and parquet floors – which have been kept largely intact by its design-savvy owners. It’s the husband and wife team of Valentina Muggia and Giuliano Di Paolo’s second store – they opened their first during 2006, in Naples, Italy, focusing mainly upon the same gorgeous Italian table linens which are a highlight of the Paris store.

The label quickly expanded their range with lines of luxe bed and bath linens, curtains and pillows, lighting, rugs and stylish tableware. All of these unite the couple’s deep appreciation for traditional quality, craftsmanship and beauty with a keen eye for colour, and their wares are simultaneously ‘fashion forward’ and timeless.

Unlike the more functional minimalism of Merci and La Trésorerie’s boutiques, Borgo’s display rooms have a deliciously rumpled opulence – linens and pillows tumble over beds and out of drawers, curtains pool over the floor and tables overflow with scented candles and European-designed dishes – including “indestructible” variants – and cookware in saturated colours.

Judging from the trendy crowd and tasty menu of freshly made Italian dishes, Borgo’s charming restaurant is already a big hit in the neighbourhood. There’s also a small épicerie and sitting area in the front, which is perfect for tired spouses and kids, or as a spot to sip a glass of Montepulciano on a rainy Paris afternoon.