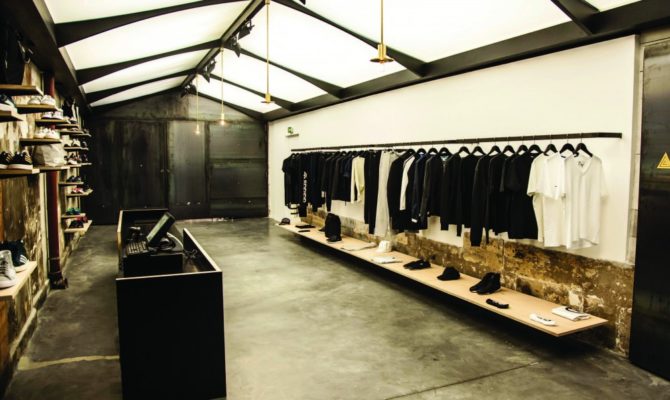 The new No42 concept store in the heart of the Marais is the latest in Adidas’ ongoing exploration of the intersection between fashion, culture and athletic wear for men and women. Preceded by No74 in Berlin and No06 in London – named for their street addresses to underscore identification with their hip, fashion-forward neighbourhoods – the boutique will serve as retail store for Adidas exclusive collaborations, a showroom, exhibition space and special events venue, all intended to spark a “relevant local and global cultural dialogue in Paris.”

If this sounds rather high-minded for exercise togs, it makes perfect sense for a brand that helped bridge the gap between sport clothing and couture. By the 1980s athletic wear had permeated mainstream fashion, yet unlike other youth-oriented cultural trends in street wear – like punk and hip-hop – had not made the leap to the rarefied world of haute couture. Adidas’ collaboration with legendary designer Yohji Yamamoto in 2002 changed all that. Calling the label Y-3, in reference to the designer and Adidas’ signature three stripes, the clothes sought, in Yamamoto’s view, a high-concept balance between “fashion’s elegance with sports comfort and functionality.” They were a hit. Flushed with success, Adidas tapped Stella McCartney in 2004 to create a line exclusively for women whose soaring popularity helped snag her an unprecedented stint designing the UK team’s apparel for the 2012 Summer Olympics.

Other exclusive collaborations followed, and now three boutiques to house them. No42’s raw industrial look – overhead glass and steel skylights meant to evoke Paris’s 19th-century passages and the Eiffel Tower – makes a sleek backdrop for a small but super-chic selection of street-smart clothes and shoes. Along with Y-3 and Stella McCartney, the boutique also carries exclusive collaborative efforts with Opening Ceremony and bad-boy American designer Jeremy Scott, beloved by chart-topping pop stars, whose cheeky creations carried at No42 include a lurid plaid kilt, a deconstructed training jacket fashioned entirely out of leather bands and chains, and his wildly successful fuzzy-poodle trainers.

Adidas’ own SLVR label is replete with wardrobe staples, some elegant enough to go from office to cocktails, like a superb black-silk wrap dress that borrows heavily from biker gear. For today’s on-the-go lifestyles, finding style, comfort and versatility all wrapped in one is what it’s all about.