In Conversation: We Meet John Baxter 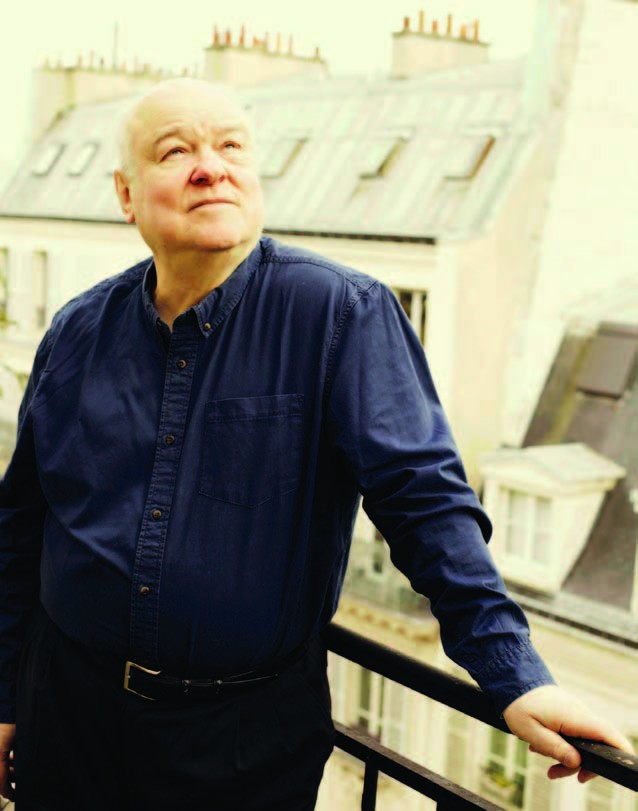 While living in Los Angeles, Australian-born John Baxter was asked by a hypnotist to name the three things that had given him the greatest pleasure in life. The third was the memory of a French girl he had met, but lost touch with, many years earlier. So on a whim he called her up – and months later found himself selling everything and moving to Paris in the name of love.

More than 20 years later, his love for the city (and the girl) is as ardent as ever, illustrated by the shelf of books he has written with it as his muse. His latest book, The Perfect Meal, is a humorous journey through the history of French cuisine and its disappearing traditions. From his rooftop apartment in rue de l’Odéon in the sixth arrondissement, John shares the details of the inspirations, frustrations, love and loathing of Parisian life. When paying a visit to chez Baxter, try to resist the temptation of taking the stairs. While your body may appreciate the exercise that six flights of stairs require, you will undoubtedly be greeting your host in a virtual state of exhaustion. But any thoughts of weariness will quickly dissipate once you set foot inside the apartment and out on to the balcony. Look straight ahead and you’ll see the imposing turrets of Notre Dame. Turn your head left and the elegant dome of Sacré Coeur rises up in the distance. The dwelling itself is imbued with Parisian charm, with walls cloaked in well-loved tomes and trinkets. But perhaps most fitting is its history – just a few doors down once sat the iconic Shakespeare and Company bookstore, before it moved to its current perch overlooking the Seine. While the ghosts of Hemingway and Joyce are long gone, the literary spirit lives on through the street’s resident scribe.

What are some of your first memories of Paris?

I remember the first time I arrived in Paris in 1970. It was just after Les Événements and there was still that tingle in the air and things had not settled down. There was a sense of disequilibrium and back then the Latin Quarter really was the Latin Quarter – it was sordid and squalid. We stayed in a hotel with the bathroom at the end of the corridor and worn red carpets and bedsprings that twanged, but it was wonderfully romantic. I remember walking through the Tuileries scuffing the autumn leaves and there were also so many more smells back then – not all of them pleasant –that gave it that sense of being an old-fashioned city. Now it’s much more slick and you don’t get that feeling of an artisanal city that you used to. I was a film critic at the time and for cinema, Paris was a paradise. You could come here and meet Godard, Truffaut, Rivette – people like that. There were so many little cinemas, bookshops and street markets that are far less common now. What is your favourite part of Paris? Well, of course, I’m biased towards the sixth. But I also quite like Montparnasse and the 14th. I often go to the rare book markets on rue Brancion in the 15th and also to the market at Porte de Vanves. That’s an absolute treasure trove and you can run into people like Catherine Deneuve who are there rummaging through things. When is your favourite time of year in Paris? Autumn. The leaves in Luxembourg Gardens are wonderful just as they’re turning and you really have that sense of the dying year. One of the great things about France is that the seasons really happen.

What’s the one thing you love most about Paris?

The women. They’re the most beautiful women in the world – so chic and beautifully dressed, and taking so much care with their appearance. And they’re so amusing and smart – and sly and clever – it’s just such a pleasure to be around them. There are so many books about Paris – is it difficult to keep finding that unique angle? I think perhaps Paris is more varied than most cities around the world. What Hemingway said about it being a moveable feast is interesting, because it does change its character far more than other cities do. And I think the old adage rings true that if there’s a market for 100 books on a subject, then there’s a market for 101 – as long as it’s of good quality. I think the mix I’ve gradually come across in my writing works well – a mixture of information, reminiscence and personal experience. But that also means I have to live my books before I write them, which can be a little testing, but also fun! What is the greatest challenge about living in Paris? Learning the intricacies of the French customs and the language; just those little subtleties that the visitor never gets. I find all the intonations and gestures so fascinating and I don’t think that exists anywhere else in the world. My wife, Marie-Dominique, once told me that, for the French, public and private spaces are the same thing. If you’re in the street, it’s like you’re in your living room – you dress and behave appropriately. And when you go into a shop or a restaurant, it’s like you’re in that person’s living room. You don’t treat the people as servants, but rather as if you’ve been invited, and you should behave accordingly. That’s a major adjustment for foreigners.

What do you dislike about Paris?

There isn’t much that I dislike really. The antiquated bureaucracy is tedious and you can’t do anything without filling out forms, but at least there is a system. You just have to discover what it is – and they’re very keen to keep you from doing that!

What advice would you give to someone coming to live in Paris?

It depends on what you’re looking for, because unreal expectations can be a big problem. A lot of people come here because they’ve fallen in love and they’re going to buy a vineyard, renovate a house or something in that vein. I think a lot of people come here expecting that romantic éducation sentimentale, which so seldom happens. Marie-Dominique and I are very lucky, partly because we were older when we got together and also because we had the money to live well. It can be very miserable living in 40m² up six flights of stairs with no elevator. But if people educate themselves about Paris and have a real sense of the possibilities, you can do very well here. You just have to test the ground before you make the move to Paris and you need to lift your game. Otherwise people find it very hard to understand why the French don’t accept them at their own valuation. But, unless you want to be treated like a tourist, that has to be earned.

After twenty years in the capital, John has Parisian living down to a fine art. If you’re looking for the authentic flavour of Paris, take John’s advice and step off the beaten track.

WHERE TO STAY: I always tell people not to stay in the first, second, fifth or sixth arrondissements. You’re not going to spend any time in the hotel room, so if you’re going to be out walking around and going to galleries all day, you can do that from a two-star place in Montmartre. I don’t see why anyone should pay more than €80 a night for a hotel. Some of the most beautiful hotels I know are out near École Militaire.

WHERE TO EAT: Again, get out of the central area, because the best places are often tucked away in the 12th and 13th. The best thing is to kind of prowl and discover things. My favourites around the sixth are La Petite Cour on rue Mabillon, and also Huîtrerie Régis on rue Montfaucon, which has the best oysters in France. They supply oysters to the President.

WHERE TO DRINK WINE: Bouillon Racine is quite good because you can sit downstairs with a bottle of wine in the afternoon when it’s quiet. In summer there is a café outside the Odéon theatre – the quality of the wine isn’t always spectacular, but the ambience is nice. I also love the outdoor cafés in Luxembourg Gardens, but I’d avoid everywhere along boulevard Saint-Michel and boulevard Saint-Germain if I were you!

WHERE TO DRINK COFFEE: There’s an extraordinary little place called Coutume on rue de la Babylone in the seventh. I’m not really wild about French coffee in general, but for the ambience of a café, I always go to Au Chai de l’Abbaye on rue Buci. It’s the old wine store from when the abbey used to be there – located far away from the church and the drunken monks!

WHERE TO RELAX: Being a book collector and interested in old things in general, I nd brocantes very relaxing. Every Sunday when the weather is good, my wife and I go to at least one brocante. I also love just getting out and walking around Paris and chatting with people. It’s tremendous exercise and it gets your head out of yourself.

NOW READ A LITTLE TASTE OF:

The Perfect Meal by John Baxter

It all began with the pansy in my soup. Rick Gekoski was in town, so we went out to dinner. Rick deals in rare books, but only the rarest. He’s sold first editions of Lolita to rock stars, bought JRR Tolkien’s bath robe, and so charmed Graham Greene that the great writer let him purchase the library in his Antibes apartment. In between, he’s written a few books and chaired the panel presenting the Booker Prize, Britain’s most prestigious literary award. After the Greene deal, the two men shared an apéritif in the café below Greene’s home. “Y’know’ said Greene, “if I hadn’t been a writer, I’d have liked to do what you do – be a bookseller.” For a man who could excite the envy of a literary giant, no ordinary meal would suffice. “Have you eaten at the Grand Palais?” I asked Rick. “You mean that block-long example of Belle Epoque bad taste just off the Champs-Elysées?” he asked. “I’ve attended art fairs and book fairs there. I’m told it also hosts automobile shows, horse shows, and I believe once accommodated a trade show for manufacturers of farm machinery. But eaten there? Never.”

In his latest tome, John travels the length and breadth of France to track down authentic French dishes and their traditions. A joyous foodie celebration. Published by Harper Perennial and available at the France Today bookstore www.francetoday.com/store

Previous Article No42
Next Article MUSIC WITH A VIEW