The Shutters of Provence 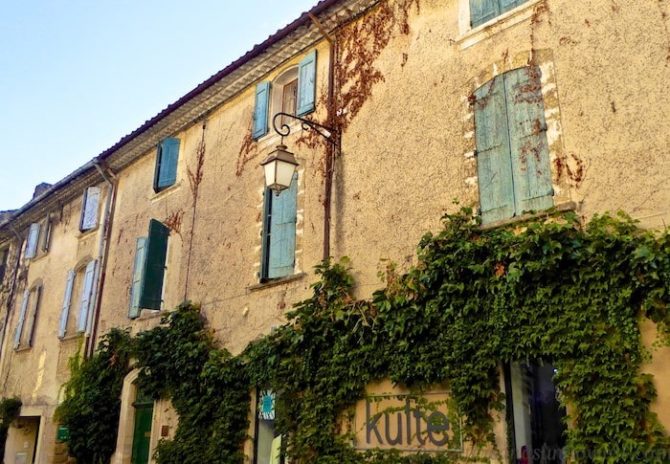 I’m frequently asked why I titled my blog Shutters and Sunflowers. All throughout this enchanting country shutters are found framing the windows of both historic and recently constructed buildings– particularly in Provence.

Shutters along the streets of Uzès setting for the novel, “The Sunflower Field”.
Copyright © Shuttersandsunflower.com. All Rights Reserved

And from mid June in the South, the fields are painted yellow, resplendent with golden carpets of smiling sunflowers. Somehow it wouldn’t be Provence without its dazzling, dancing tournesols and the shutters which adorn almost every window. I think these shutters and sunflowers are both so defining of France.

I thought it might be interesting to explore the origins of the shutters: Where exactly did they come from?

THE HISTORY OF SHUTTERS

The first shutters are believed to have been designed by the ancient Greeks. Made of marble, they had fixed louvres and just as today were used to control ventilation and light. 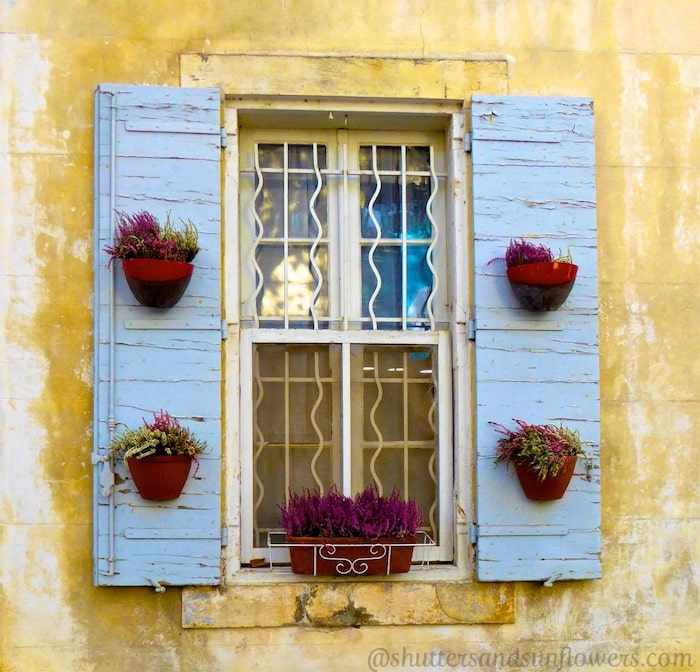 Gradually over the years the concept was developed. Wood replaced the marble and the louvres became movable, allowing the amount of light and air to be controlled. 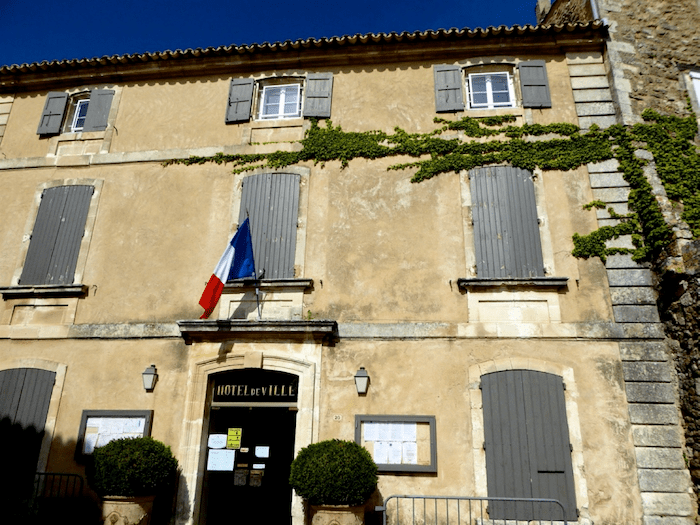 Interior shutters were pierced with holes and then covered with translucent oiled parchment allowing light in while also preventing some of the draughts. In the 13th century after glass had been invented, windows became larger and building techniques grew more sophisticated. Interior shutters were designed, which slide into wooden apertures inside, beside the windows. 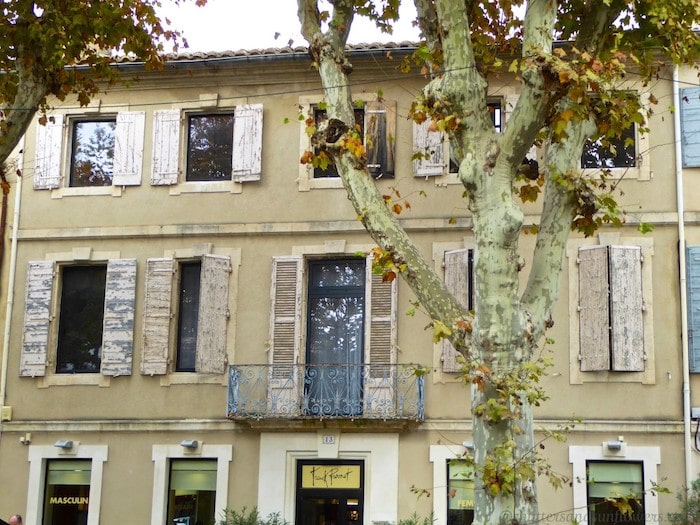 By 1750 the first exterior shutters, contravents or persiennes, appeared. Normally painted white, they led to the decline of the balcony as it was too difficult to open shutters from a balcony. 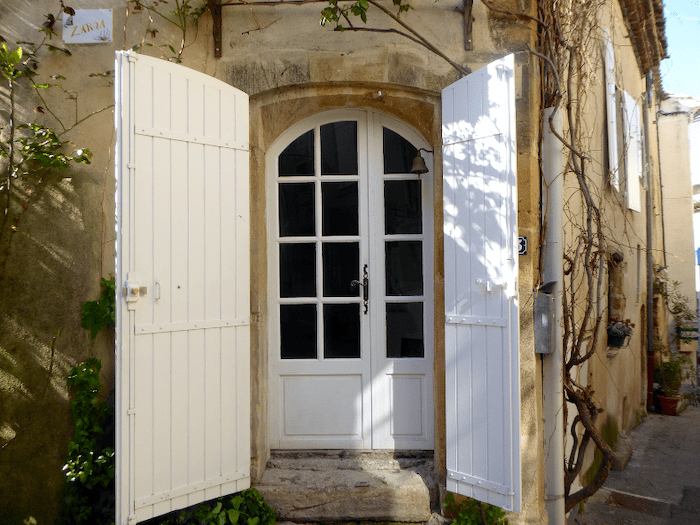 It’s believed that shutters were first used in France by King Louis XIV at his magnificent home, the Palace of Versailles. Supposedly he introduced louvered shutters into his garden walls so only he could open them, allowing him to watch unseen the beautiful ladies from court bathe in the gardens’ numerous ponds. 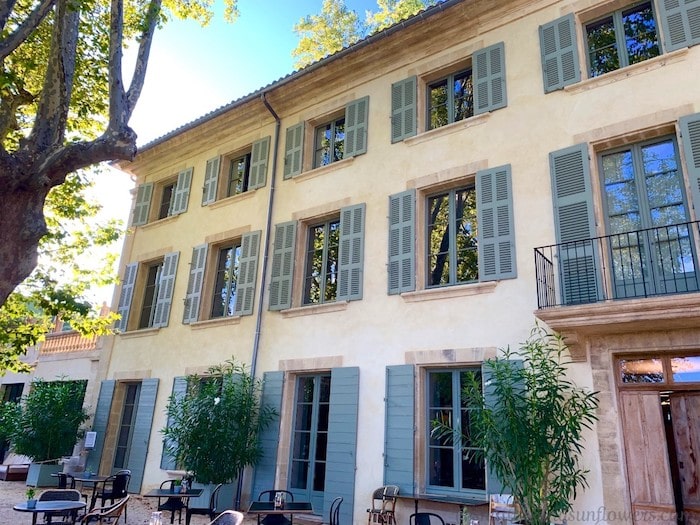 Similarly in England, the story goes that when Lady Godiva road through the streets of Coventry naked, Tom watched her unseen through his louvered shutters. Hence the term ‘Peeping Tom’!

Today few houses in England have shutters. In France however they remain a distinguishing feature of French architecture, forming an integral part of their charm. 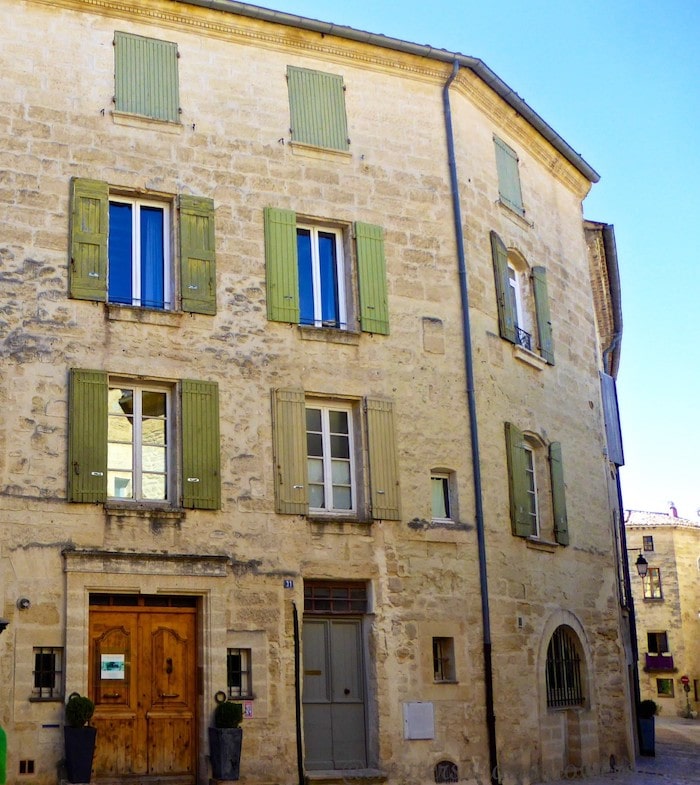 WHY FRENCH HOUSES HAVE SHUTTERS

As attractive as shutters are, they have little to do with adornment but more with practicality. Restricting the amount of light and heat, shutters help to keep rooms cool and prevent furniture from fading. On hot summer nights shutters allow the inward opening windows to remain fastened back, permitting in the breeze but keeping houses secure and minimizing insect intrusion.

When the heat begins to soar, keeping the shutters closed can make a huge temperature difference. Although closing the shutters during the day darkens the room, I’m constantly amazed that when it’s sizzling hot outside if the shutters of our village house Maison des Cerises are kept fastened inside it remains cool. Similarly, on bitter winters days when the Mistral is venting its wrath, closing the shutters helps keep the icy chill out; surprisingly it can get very cold in Provence. 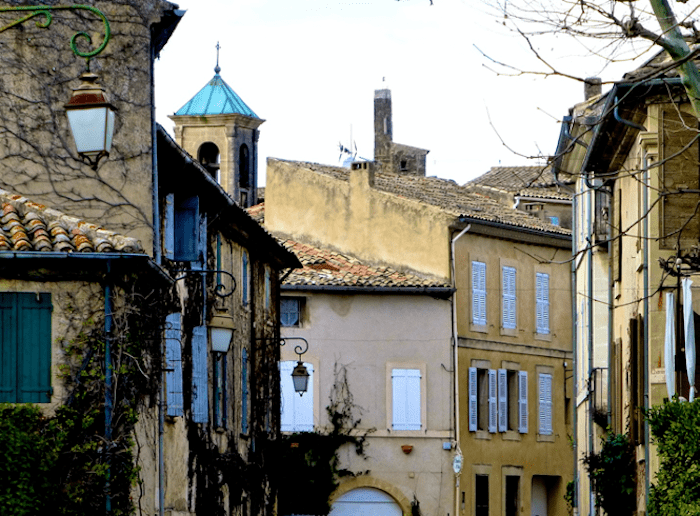 I’ve been warned that some French insurance companies require you to close your shutters if you’re going to be out for longer than two hours. Failure to do so can invalidate your insurance; I’ll have to check our policy!

THE DESIGN OF THE SHUTTERS OF PROVENCE

There are a myriad of shutter styles. Some shutters are louvered and some, like ours downstairs, are hinged so that only the lower half opens. 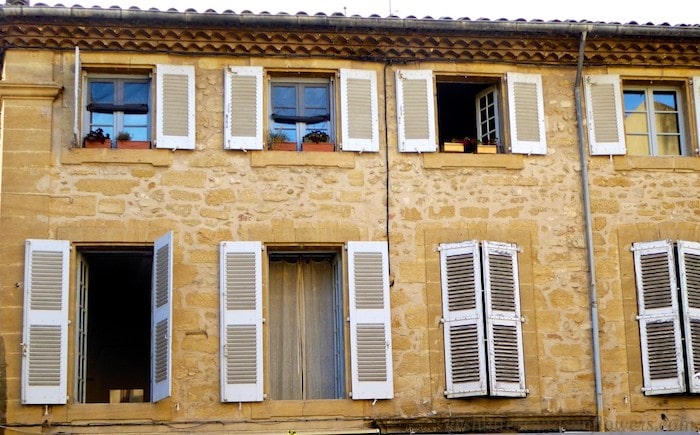 Similar to many shutters on village houses and farm properties, the shutters on our shutters house Maison des Cerises are quite plain. 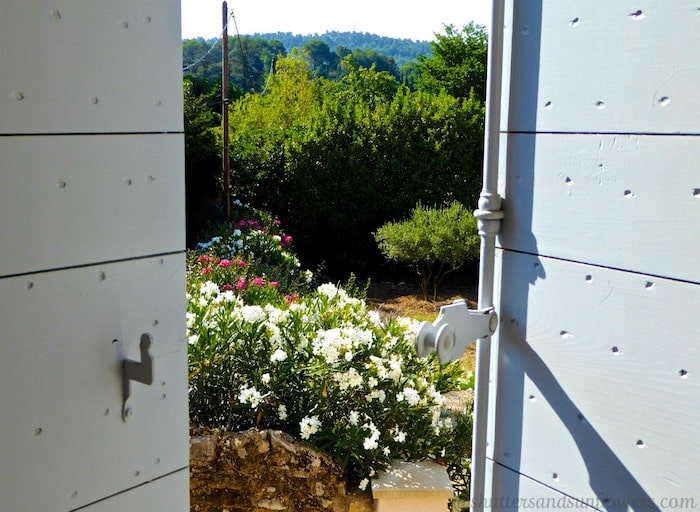 A view of Lourmarin through the shutters. Copyright © Shuttersandsunflower.com All Rights Reserved

Shutters on listed building can prove to be problematic for property owners. Les Bâtiments de France, an association which protects historic buildings, has the authority to dictate both their style and colour. 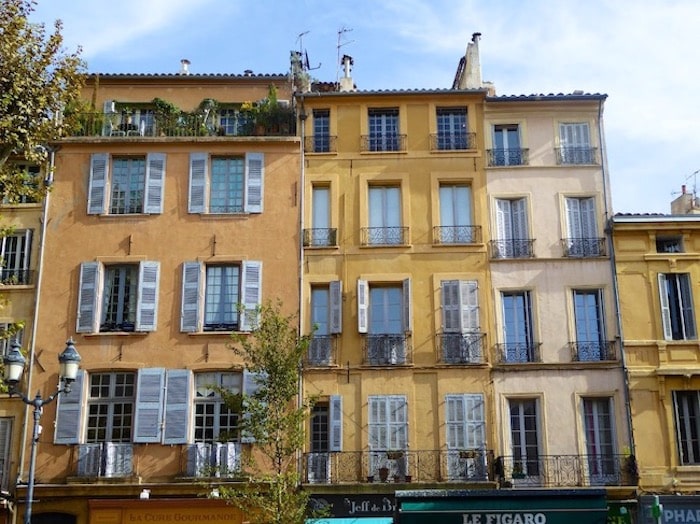 It can be a requirement to obtain the permission of the local maire to change your shutters especially if your property is located in a designated plus beaux village de France. 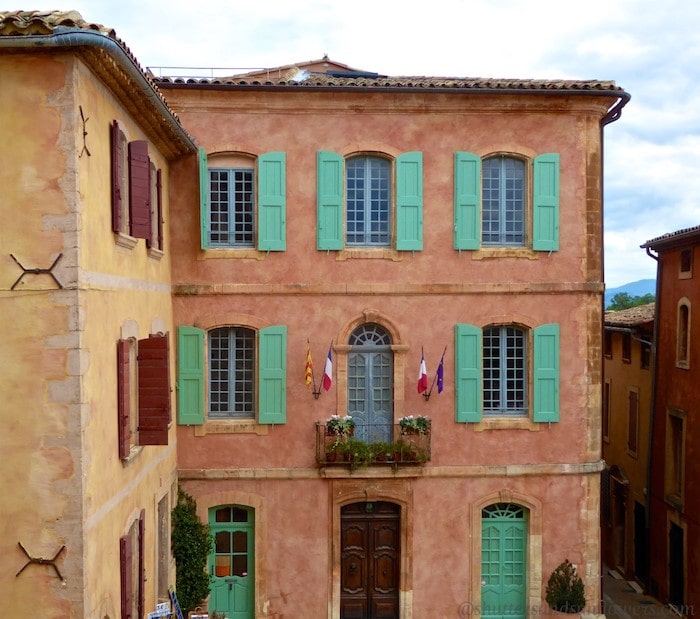 Shutters on Maire in Roussillon. Copyright © Shuttersandsunflower.com. All Rights Reserved

Although Lourmarin boasts this sought-after designation, there doesn’t seem to be too many restrictions and a wide array of shutter colours and styles can be found. 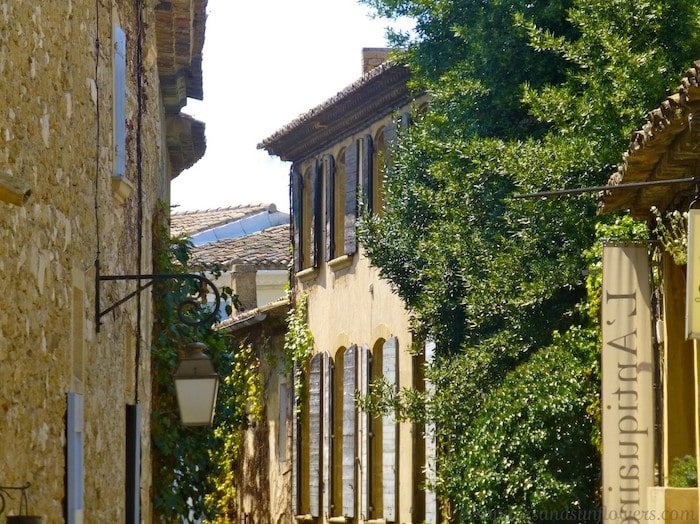 Some such as these have been adorning windows for centuries. 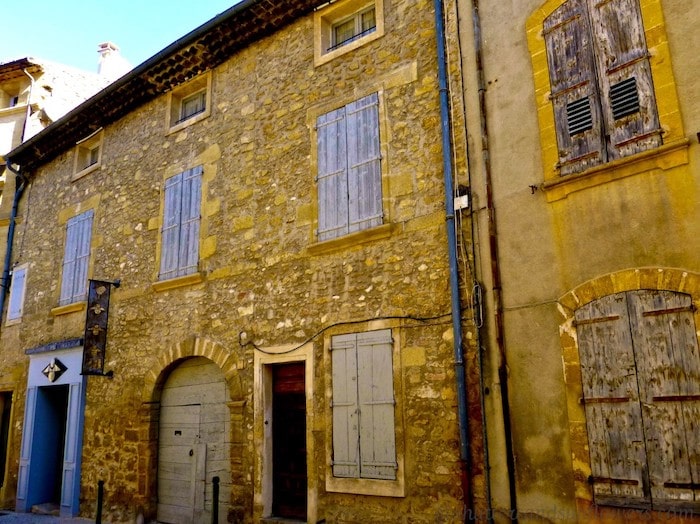 Some have only been there a few years, but an abundance of shutters can be found in our enchanting little village. 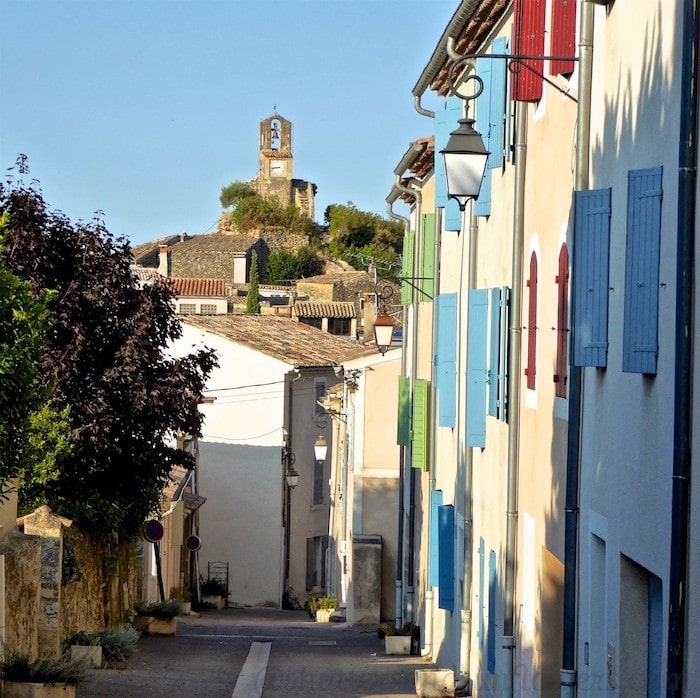 Next time I’ll tell you a little about the sunflowers.

Download The Lourmarin Travel Guide to learn about what to see and do in Lourmarin and where you can see for yourself the shutters of Provence! Caroline’s house in Lourmarin is available to rent here.

Caroline is a travel writer and historical fiction author, based in San Francisco. She grew up in England, spending happy childhood holidays in France where her passion for travel and history began. She writes a much loved travel blog “Shutters and Sunflowers” and is the author of The "Sunflower Field."