Visiting Colmar in the Heart of Old Alsace 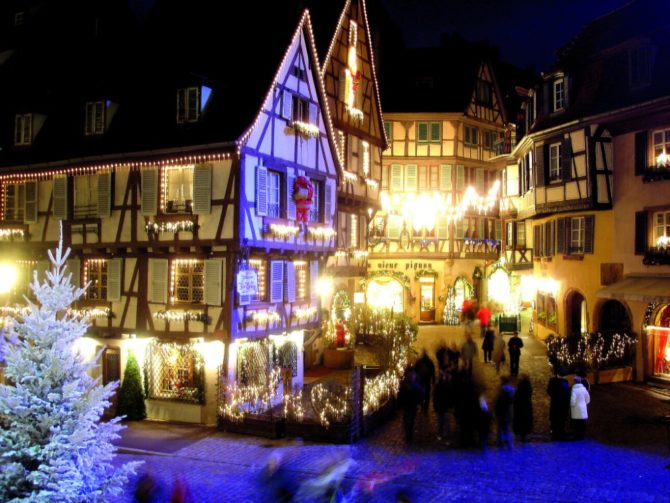 Strasbourg may be the capital of the Alsace but Colmar is the capital of the picturesque. Half-timbered medieval and Renaissance houses painted in shades of sky-blue, golden yellow, turquoise and ochre compete for attention with scarlet geranium-festooned balconies. Quaint cobbled lanes invite you to become a flâneur, while decorative metalwork signs proclaiming the artisanale history of each house lead the eye upwards to fishtail terracotta glazed roofs and glimpses of the cathedral tower.

The charm and authenticity that appeal so much to the 21st-century tourist is a beautifully preserved and polished facade, beneath which lies century upon century of fascinating civic history. Colmar can trace its origins to Roman times but the most visible legacy dates from the Middle Ages, when it became an Imperial Germanic city under the Holy Roman Emperor Fredrick II of Hohenstaufen.

Franciscans, Dominican and Augustinian monks established orders in the city – many of Colmar’s most imposing buildings are collegiate or were church-commissioned as places of worship, such as the Collegiale Saint Martin (1235-1365) in the Place de la Cathédrale. During the Renaissance, the city enjoyed a period of wealth as merchants, wine-growers and agriculture brought waves of prosperity. Many fine German Renaissance buildings survive, such as the exquisite Maison des Têtes, named for the 111 sculpted heads and figures decorating its facade and built in 1609, on behalf of a wealthy merchant.

A blended German/French cultural heritage is in evidence everywhere in Colmar – Voltaire, who lived here from 1753 to 1754, described the city as “half-German and half-French”. Yet despite the ancient territorial conflicts which have created the unique mélange of cultures, the modern day citizens of Colmar are notably proud to be French, especially following the experiences of the World Wars. Remarkably, although it was the last city in France to be liberated from the German occupation of World War 2, Colmar was fortunate to suffer minimal destruction and few shells actually fell on the city. As a result, unlike many a ‘vieille ville’, the old part of Colmar is actually a small town in itself, covering a substantial area with around a hundred streets and squares, many boasting pavement cafés, restaurants and boutiques.

It’s intimate enough to enjoy during a short break, but large enough to continue to surprise longer-stay visitors with its wealth of culture, history and charm. Civic pride is clearly linked to preservation in Colmar and the sustained period of peace since 1945 has allowed the city fathers and planners to rehabilitate formerly run-down areas, such as the Quartier des Tanneurs, which lie within the boundaries of the old city walls.

Colmar is popular with tourists throughout the year. In the height of summer the temperatures rise but the city is cooled by numerous fountains and the languidly flowing river which runs through the popular Petite Venise district. A pleasant excursion by wooden barque takes you under ancient stone bridges and along the pretty Quai Poissonnerie, allowing you to imagine and relive the watery route once used by market gardeners taking their produce to the covered market. July brings the international music festival, a highly regarded entry on the European calendar of live music.

Visit in early autumn to appreciate how this historic city is also the major stepping stone along the ‘Route des Vins d’Alsace’, a trail that meanders through centuries-old villages and vineyards that benefit from the warmth of the sun on the south-facing foothills of the Vosges. There are four vignerons (wine makers) in Colmar and so a dégustation of the famous Riesling, Pinot Blanc, Pinot Gris, Sylvaner, or Gewürztraminer wines is never far away.

Come December, the temperatures in North Eastern France start to drop sharply but the warming Christmas traditions are very much alive– Noël à Colmar is renowned as the quintessential home of the Christmas market. There are five separate markets, each celebrating different products and crafts. At the festive time the whole city unites in seasonal revelry with concerts, choirs and animations competing for attention with the magical street lighting which adorns the vieille ville.

When your appetite for the picturesque is sated, or if the weather drives you indoors, there are two must-see museums. The Musée Unterlinden is France’s second most visited regional art museum and possesses arguably the greatest single piece of Western medieval religious art: the Isenheim Altarpiece by Grunewald. The museum’s home, a former convent, is now being massively extended to permit the display of much more of its extensve archive. The conversion of a former public swimming pool and a brand new building will introduce space for modern and contemporary art, doubling the overall size and adding to the impressive Middle Ages and Renaissance collections.

Much smaller in scale, but with a more intimate connection to the city, is the Musée Bartholdi. A native of Colmar, Frédéric Auguste Bartholdi was a 19th-century sculptor of exceptional talent with a prodigious output – he was responsible for statues of historic and military figures which grace the grand squares and plazas of many French cities. Colmar itself has many fine examples of his work throughout the city and the Museum is an intriguing glimpse into his world, revealing many fascinating details about Bartholdi’s family life and techniques. It also devotes an entire floor to the story behind his greatest achievement, one which overshadows all others: the design and monumental sculpture that is the Statue of Liberty in New York.

Maison Martin Jund: Friendly and informative wine tasting in the heart of the city (with a characterful chambre d’hôte attached).