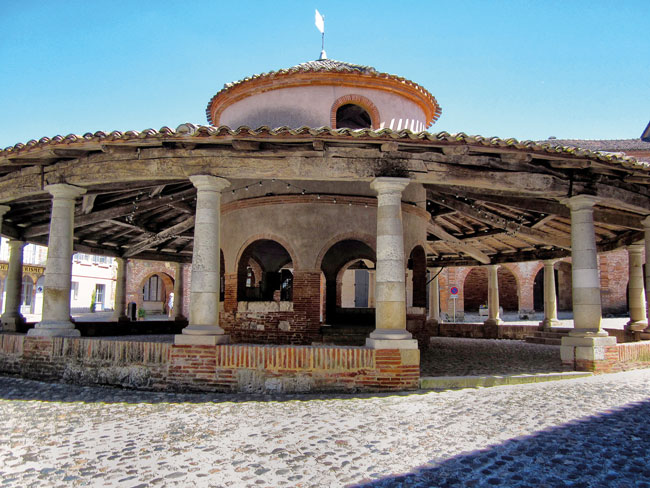 Historic cathedrals, vineyards, nature reserves… there truly is something for everyone in this corner of France. Here are some of our favourites.  Note: This article is part of a bigger magazine feature called “Two Classic Road Trips Through Historic Gascony.”

A mecca of Romanesque art, the Saint-Pierre de Moissac Abbey and cloister date back to the 7th century. The Abbey’s instantly recognisable tympanum was featured in the film The Name of the Rose. www.abbayemoissac.com/fr/l-abbaye-saint-pierre

The site of the Gurs WWII internment camp (the largest in France) is 20km east of Oloron-Sainte-Marie and 5km from Navarrenx. It is open to the public and free to access. A national memorial was built here in 1994. A 180m-long railway line (symbol of deportation) connects the two large slabs bearing commemorative inscriptions.
www.campgurs.com

Flamarens Castle was built in the 13th century and used as a fortress during the Hundred Years’ War. Since 1983, the current owner has restored the monument, located on one of the hilltop Saint-Jacques de Compostelle pilgrimage roads. Its open-air church ruins are spectacular, and free to wander through. Guided tours of the castle are available.
www.chateaudeflamarens.org

The Maquis de Meilhan, inaugurated in 1949, is a memorial erected in memory of the 67 Maquisards (resistance fighters) who were surrounded by, and massacred by, 1,200 Germans. Since then, every first Sunday in July, Gers residents have gathered at the site to pay their respects.
www.tourisme-gers.com

The Maison Laulhère in Oloron-Sainte-Marie has been making the Basque beret since 1840. This iconic product is a unique blend of ancestral heritage and know-how. Visit the former beret factory which has been restored and www.laulhere-france.com

Drive or walk from church to church on the Route of the Painted Murals to discover the murals and sculptures of the southern Gers set against the dramatic Pyrenean backdrop. The buildings with their splendid painted decoration date from the 12th century.
www.valdegerstourisme.fr

Indulge in a guided tour and tasting in the emblematic vineyards of the Côtes-de-Saint-Mont AOC. At the Château de Sabazan, listed as a Historic Monument since 2012, visit the vines and head to the cellar, where you can discover the secrets of a plot of pre-phylloxera vines.
www.plaimont.com

The winery is open for free visits year-round with guided tours in French, English and Spanish. You’ll discover the history and traditions of the region, the winery’s semi-underground cellar, Gallo-Roman mosaics and ancient winemaking equipment. Then taste their best wines, paired with delicious snacks.
www.cavedejurancon.com

Located in Nogaro, the Vélorail de l’Armagnac is the ideal activity to do with family or friends. Ride on a pedal cart (electrically assisted!) to discover the Gers countryside on a semi-wooded 12km course. Arranged on one of the first Gers railway lines, created in 1875, the Vélorail takes you through a variety of vineyards.
velorail-armagnac-gers.jimdofree.com

All the ancient and traditional beehives from across France are represented here, as well as the kit needed for breeding of bees and making honey. Discover exhibitions on wax and its various uses, from candles to wax seals. Allow at least an hour to browse the 700m2 of exhibitions. Glazed beehives allow you to see the bees working live and, during the summer season, you may have the chance to see the queen laying her eggs.
www.lemuseedumiel.fr/page1.html

This Pyrenean donkey farm also grows lavender, rosemary, peppermint, helichrysum and cornflower, which are distilled to obtain essential oils. These are then combined with donkey milk to make cosmetics and creams. Depending on the season, you can watch the donkeys being milked and see the aromatics being harvested.
hitton.fr/gb/content/9-visit-the-farm

The 60-hectare Ferme de Mounet is dedicated to the breeding of geese and ducks, which are raised in full freedom, their transformation from farm to table being carried out with the greatest respect for the animals. Enjoy a weekend learning how to prepare duck and geese specialities, or pop in for a simple farm or shop visit.
www.ferme-de-mounet.com/week-end-gastronomique-foie-gras.html

Ride in a galupe (traditional flat-bottomed boat) along the arm of water connecting the Lac de Léon and the Atlantic Ocean via the Courant d’Huchet, and discover a botanical paradise of swamps, peat bogs, dunes, and over 200 species of birds, otters, minks, herons, turtles and fish.
www.bateliers-courant-huchet.fr

More in Gascony, What to see and do