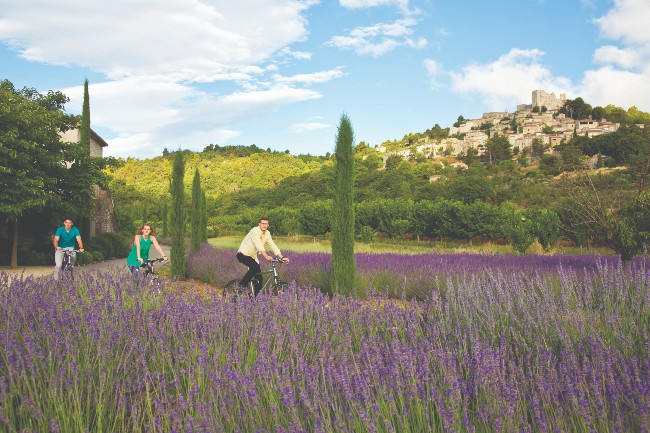 The medieval village of Lacoste, with its magical views over the lavender-filled Luberon valley, is home to Savannah College of Art and Design, an art and design university that is celebrating this location’s 20th anniversary.

SCAD FASH Lacoste Museum of Fashion + Film recently hosted an exhibition of Cuban-born American fashion designer Isabel Toledo that got rave reviews. Curated in close collaboration with her husband, the artist and fashion illustrator Ruben Toledo, A Love Letter was the first posthumous exhibition of the designer’s work and an homage to the emotional power inherent in her garments. From June 27-October 22, check out Azzedine Alaïa: L’Art de la Mode, a rigorously curated selection of creations by the iconic Tunisian-born designer and master of Parisian haute couture. Organised in collaboration with Fondation Azzedine Alaïa, Paris, and curator Olivier Saillard, the exhibition honours Alaïa’s artistic triumphs as a virtuoso of cut and proportion and his gift of construction, featuring 20 career-defining gowns, sleek suits, and other exquisitely tailored garments that remain unrivaled in accentuating the female form.

Maison Basse, the 16th-century farmhouse that forms the heart of this community, has an exceptional history dating back four centuries. At points it has been a community hub, a guesthouse, a gambling den and a children’s summer camp. When SCAD took on the property, along with numerous other dilapidated buildings in the village, there was plenty of work to do: SCAD preservationists, alumni, and staff worked alongside local masons and specialists to make the spaces suitable for students and their modern needs. Now the community oven is a reading nook and the former hayloft a painting studio; next door is a Mac lab. Meanwhile, SCAD Lacoste’s three-storey library is housed in the village’s former boulangerie. The cosy interior features an original domed stone oven on the ground floor, which serves as an intimate reading area.

Join SCAD this October for the dedication of its new Promenade de Sculptures, as part of its 20th anniversary celebrations. It features ten permanent outdoor installations and large-scale works by alumni, students, faculty and staff. And don’t miss Metagalaxia, a new sculpture by the artist Jedd Novatt, which is set to be unveiled in June.

The Chemin des Parcs is a circuit of connected trails in the surrounding Luberon countryside which you can explore on foot, by bike or on horseback. They reveal a mosaic of landscapes, fascinating rural heritage and the remarkable fauna and flora of Provence. www.cheminsdesparcs.fr

SCADFILM presents the Film Festival du SCAD, a fantastical four-day festival. Join filmmakers, celebrities and fellow cinephiles for exclusive screenings, industry presentations, a special tribute to Agnès Varda (1928–2019), and spectacular events with some of entertainment’s brightest stars. Also, from the end of June until September 5 as part of SCAD’s anniversary celebrations, treat your senses to Les Nocturnes, a mesmerising light show along Rue Saint-Trophime, Friday and Saturday nights, 9pm to midnight.

The SCAD Alumni Atelier supports some of its distinguished and most promising graduates by offering them the time, space, and resources to immerse themselves in the creative process and begin their journey in the professional art world. Visit the studios located in historic caves on the Rue des Artistes and meet tomorrow’s big names in the art world.

Lacoste’s medieval castle has been home to such diverse names as the infamous Marquis de Sade and couturier Pierre Cardin. Built at the start of the 11th century by the wealthy Simiane family, it is classified as a monument historique. The Marquis de Sade’s family owned the castle through marriage and the writer laid low there in the 1770s amidst the court cases and mayhem sparked by his works. He built a theatre there and used the castle as the inspiration for Silling Castle in The 120 Days of Sodom. Almost entirely destroyed during the Revolution, the castle was rescued by André Bouer in the 1950s and he set about restoring it, a task continued by Pierre Cardin when he bought it in 2001.

Set up by Pierre Cardin 22 years ago, this festival of theatre, music and dance takes place in the quarries to the west of the castle and specifically supports up and coming talent. This year, the festival starts on July 24.

BUY FROM THE ARTISTS

Take a little piece of Lacoste home with you! shopSCAD holds artists’ exhibitions, while the boutique sells handmade items, jewellery and small artworks by students, faculty and alumni.

The summer lifestyle at SCAD Lacoste