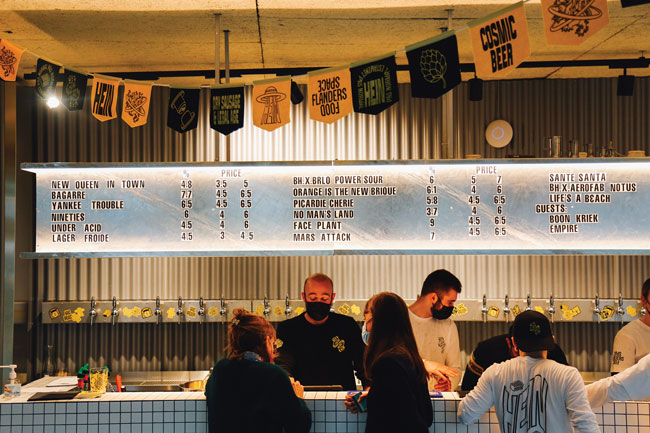 Though they’re less well-known than the bouchons of Lyon, the winstubs of Alsace and the bistros of Paris, the estaminets of northern France are similarly much-loved local institutions, which is why they’re currently enjoying a very welcome renaissance. If traditional estaminets served local comfort food, including dishes like carbonnade (beef braised in dark beer), waterzooi (chicken in a cream and egg yolk sauce, served with carrots, leeks, onions and celery) and pot’je vleesch (boned rabbit, veal, pork and chicken in white-vinegar aspic) and locally brewed beer, the new ones are rebooting the idiom to make them appeal to a younger crowd more likely to spend their working days on computer keyboards than in the factories and mines for which this industrial region of France was once best known.

Hein, in Lille, is a perfect example of the new estaminet. It was founded by two Ch’tis – which is how northerners Baptiste Dufossez and Joseph Timmermans proudly refer to themselves – who wanted to marry the growing craft movement in the north of France with a new take on the estaminet, which they call a ‘taproom’, a hybrid pub-estaminet.

This is why Hein serves a regularly changing offering of locally brewed craft beers, along with a selection of others the owners have found to be of exceptional quality, including two American brews – New Queen in Town, a pale ale, and Yankee Trouble, a New England-brewed India pale ale.

The comfort-food northern French menu designed to accompany the beers gives place of honour to frites, or fried potatoes, because they’re adored all over Le Nord and neighbouring Belgium, and also tips its hat at friends across the Channel with a Welsh rarebit, the cheesy British treat that’s very popular in Lille and its environs. Carbonnade makes the menu, along with other very well-prepared Belgian dishes, including a filet americain, the local coinage for steak tartare, the delicious pork-and-veal meatballs that are a speciality of Liège, and my own personal weakness, the deepfried Belgian croquettes stuffed with tiny grey North Sea shrimp in Béchamel sauce.

Healthy eating gets a nod or two as well, with dishes like the Dunkirk Superbowl, a composition of quinoa with smoked herring, pickled fennel, apple and celery, or a cauliflower cream risotto with chicory. When it comes to dessert, I’d probably place an order for more shrimp croquettes, but for the less obsessed, the panna cotta with speculoos (crispy spiced biscuits, another regional favourite) is very good.

Usefully, Hein is located in the heart of Lille, a short walk from the Lille Flandres train station and the recently opened good-value Mamma Shelter hotel, and it’s also not that far from Lille Europe, where the Eurostar stops.

Want to be inspired by more French foodie experiences and enjoy classic French food, drinks and recipes? Head to our sister website, Taste of France, here.

Lead photo credit : Hein in Lille has put a 21st-century slant on the traditional estaminet © Hein

Previous Article Jeans in the Genes: Family Artisans in the Cévennes
Next Article What to See and Do in Gascony