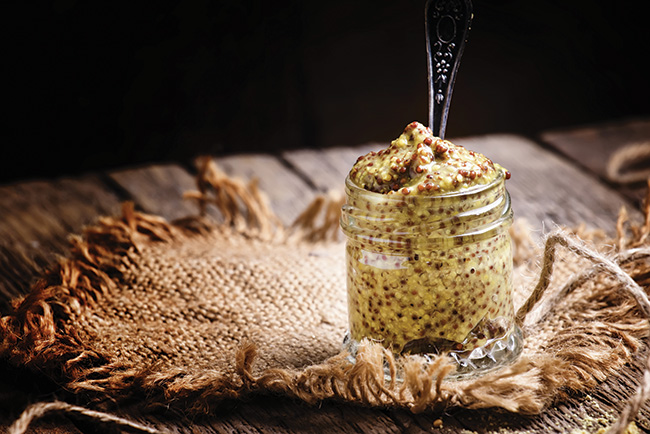 Your tasty and topical round-up of the latest French food news and developments from mustard shortages to warming tisanes.

Oh me, oh Maille, what drama in France over recent months because of the humble mustard grain – or lack of it. The moutarde-mad country is experiencing a serious shortage of the kicky condiment from Dijon, with failed crops last summer in Canada and obvious supply problems from Ukraine leaving a big hole in seed sources. Iconic brand Maille even placed a restriction of one pot per family such was the pénurie (shortage).

However, industry experts expect a return to normal by the end of the year. “There will be mustard on the shelves again from the beginning of 2023, when the Canadian crop will be delivered to France,” Fabrice Genin, farmer and president of the association of mustard seed producers in Burgundy told local TV channel France 3 Régions.

It’s official: the best pastis in the world is made by Lyon arrivistes. Pastis, the cloudy aniseed-flavoured apéritif associated with balmy summer nights, is the beloved tipple of southern France, and Marseille in particular. So imagine the Marseillais’ horror when this year, the World Drinks Awards announced that the Best Pastis du Monde is made in Lyon. Anis des Gones, made by the Distillerie de Lyon in the city’s 8th arrondissement, won the gold medal at the 20222 competition – just 18 months after the company was formed.

Here’s how the World Drinks Awards described it: “Big, bold nose with bags of character. Does have a musky, aftershave type character to it. On the palate the flavour again is massive, with notes akin to sandalwood and patchouli, very unusual. There is a tongue-tingling menthol to it, with more woody herbaceous notes towards the finish. Very cool.” At €29.90 a bottle, you can expect notes of anise, liquorice, mint and herbs as well.

Time for a Tisane

While the French might not be big fans of ‘builder’s tea’, they love a ‘tisane’ infusion. Helping to meet the need is Tea Heritage, a boutique company based in Lyon that produces delicious and unusual organic teas. They have just launched a new Autumn tea collection, featuring unique designs inspired by nature. This comprises four hand-stitched tea bag designs and loose tea in delicious blends, including the brand-new Rooibos Cinnamon Roll variety and a fox, squirrel, mushroom and autumn leaf to take drinkers on an autumn adventure via the senses! Prices from £6.30 for a box of five teabags.
www.teaheritage.fr/en

Use some delicious honey in a tart © Shutterstock

A Taste of Provence

Formed in Aix-en-Provence in 1830, the delicatessen Maison Bremond produces confectionery and condiments that celebrate classic flavours, but with modern and unique twists. Their ethos is simple: to live and work in harmony with nature, cultivate the soil while respecting its biodiversity, support committed farmers and promote seasonal products. Among their treats are Lemon Curd Cream & Olive Oil, Aubergine Caviar and PGI Lavender Honey. www.souschef.co.uk/collections/maison-bremond

Marseille’s Alexandre Mazzia is one to watch

While France has three of the World’s 50 Best Restaurants, which were announced at a glittering ceremony in London (Copenhagen’s Geranium came out on top), it was the winner of the American Express One To Watch Award that caught our eye. Marseille restaurant AM par Alexandre Mazzia – primarily a fish- and vegetable-led restaurant – has been praised in the past by Michelin inspectors for its ‘audacity’ and Central African influences, courtesy of Mazzia having lived in Congo until he was 14.
www.alexandre-mazzia.com

Previous Article In the Footsteps of Beauty and the Beast
Next Article Attention All Bike and Wine Lovers: Cruising and Cycling with Boat Bike Tours