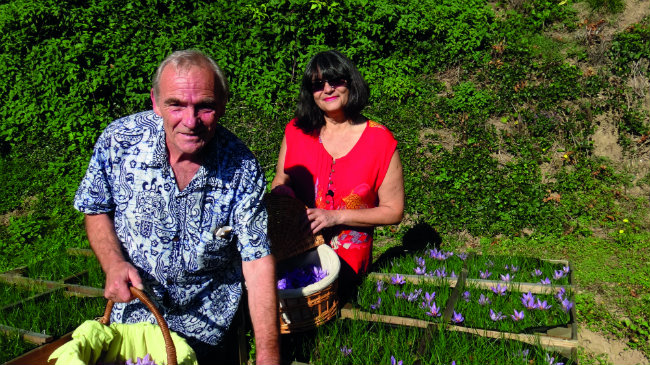 Fourteen years ago, Eve and Yves Boismartel struck gold – red gold to be exact – when a saffron farm “fell into their lap” courtesy of a bombshell inheritance.

“It was a bit of a curveball,” admits Eve, who now runs speciality store La Maison du Safran, selling a range of infused jams and syrups in Castres. “The owners were moving and didn’t want the business to die so they bequeathed it to us out of the blue,” recalls the former social worker. “We’d dabbled a bit after watching a news segment on saffron farming – just as a hobby – and that’s how we met them. They’d offered to share their savoir-faire with us. But we never had any intention of making a business out of it… until they sprang their 21,000-crocus safranière on us!”

A tad shell-shocked, she and husband Yves spent sleepless nights weighing their options: either take on the farm, snug amid Tarn’s sun-scorched vineyards, and learn on the hoof or walk away and squander a life’s work. They went with option A and rolled into the 600m2 plot one fine morning, armed with micro-scissors barely wide enough for a pinkie. 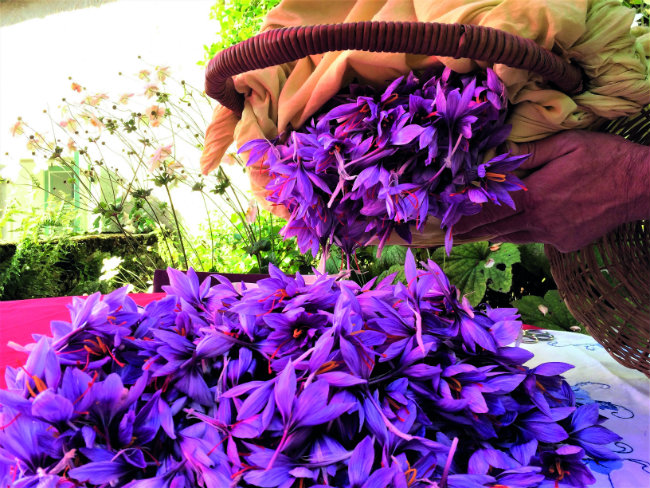 For all their go-getting attitude, nothing could have prepared the plucky duo for the scale of the maddeningly fiddly task ahead. Saffron crocuses bloom in the autumn over a three-week window, meaning growers can spend up to 19 hours a day hand-picking the dainty purple flowers and extracting their prized rust-red stigmas with only nail clipper-sized scissors. The precious strands are then dried over heat and packaged.

“It’s painstaking work,” admits Eve. In its heyday saffron production reached 10 tonnes a year in the area, but today only seven safraniers keep up a fast-waning tradition, yielding just 3kg between them. The Boismartels’ farm alone accounts for 400g of the overall harvest. “People think it’s a sure-fire way to make your fortune. But the yields are so small, they realise quickly it’s not about the money. It’s a labour of love, not a job.You need passion, elbow grease – and a lot of plasters.”

Previous Article Kindred Spirits: Creative Cocktail Recipes for Apéritif Hour
Next Article Where to Stay and Eat in Limousin