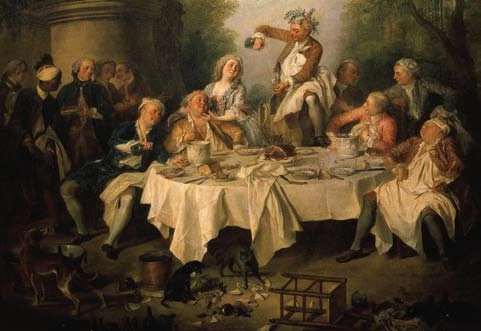 We are all familiar with World Heritage Sites, selected by UNESCO for their cultural or physical significance or merit. Think Angkor Wat in Cambodia, Australia’s Great Barrier Reef, the Statue of Liberty or, for that matter, the wooden churches of Maramures in Romania, which share billing on UNESCO’s eclectic list with Chartres Cathedral and Westminster Abbey. The hope is that by singling out these sites as global treasures they are less likely to be selected for depredation by the growing ranks of global asset-strippers and other assorted fanatics.

But did you know that for the last ten years the good folk at UNESCO’s Place de Fontenoy headquarters in Paris have also been compiling a list of the world’s intangible heritage? This list designates activities and events like Mexico’s Day of the Dead festival, the weaving of the Ecuadorian straw hats confusingly known as panamas, Croatian folk singing and the famous hopping procession of Echternach, in Luxembourg. And since 2010, thanks to intense lobbying from the Elysée Palace, just across the river Seine from UNESCO headquarters, the world’s intangible heritage list also includes the French gastronomic meal—an activity lauded as a “social custom aimed at celebrating the most important moments in the lives of individuals and groups”.

The citation goes on to explain that the Gallic gastronomic meal “emphasizes togetherness, the pleasure of taste, and the balance between human beings and the products of nature” and stipulates that it should include “the careful selection of dishes from a constantly growing repertoire of recipes; the purchase of good, preferably local products whose flavors go well together; the pairing of food with wine (my italics); the setting of a beautiful table; and specific actions during consumption, such as smelling and tasting items at the table”. It doesn’t stop there. This heritage-activity meal “must also respect a fixed structure, commencing with an aperitif (drinks before the meal) and ending with liqueurs, containing in between at least four successive courses”.

So there you have it. The French gastronomic meal is officially an integral part of the world’s intangible heritage. But hard on the heels of this national triumph comes the threat of cultural calamity. Just two years after obtaining its UNESCO blessing, the French gastronomic meal is already under assault. And the alarming thing is that the chief threat to this culinary heritage comes, not from fast-food restaurants or the purveyors of ready meals—although they are doing their bit. It is the French themselves who are undermining the foundations of their heritage.

Yes, they are still smelling and tasting items at the table. Some of them are still purchasing local products whose flavors go well together. But the all-important pairing of food with wine? The de rigueur aperitif? The postprandial liqueurs? The unfortunate reality of today’s France is that wine and other alcoholic drinks—the sine qua non of any self-respecting feast, the lubricant of conversation and the maker of merriment— are increasingly absent from the French dining table, even for those celebratory repasts that cry out for a coupe de Champagne at the beginning of proceedings, a trou Normand somewhere along the way, and a pousse-café to round off the culinary experience.(In Normandy that mid-meal palateclearer is a shot of Calvados, in other regions it’s Armagnac, Cognac or other digestifs.)

The numbers are there to prove it and they are particularly alarming when it comes to wine. French wine consumption has been in decline for years. But there seems to be no slackening in the pace at which the French are turning their backs on one of the essential components of their identity—a product once described by philosopher and critic Roland Barthes as a “totem drink,” the very emblem of Frenchness.

Back in 1965, per capita wine consumption in France was roughly 200 bottles per year or three glasses a day. Now it’s down to the equivalent of just one glass per day. In 1980 the average French family would have enjoyed wine at half of all meals. Now it has fallen to one in four. And those numbers, from a recent survey carried out for the Ministry of Agriculture, overlook the fact that 38% of the French are (or claim to be) teetotalers, and a majority, particularly women, now claim to be occasional drinkers. Only one in five French adults drinks  a glass of wine every day. “There has been a real shift in consumption habits,” says Caroline Plot, the official who oversaw the government research. “Fizzy drinks and fruit juices are taking the place of wine on the French table.”

Better, perhaps, to ask what’s happening, because the wine-consumption picture is still evolving. Time was when wine, along with bread, was an essential part of the French diet— du pain et du vin. One the eve of World War II there was a bar on practically every corner in cities, towns and villages across the country (in 1939 France had a drinking establishment for every 80 inhabitants compared with 430 in Britain) and the average French adult consumed over half a bottle of wine a day. Children were given watereddown wine and workers, particularly farm laborers, would regularly drink on the job, or at the very least begin the day with a glass of wine (or something even stronger) in order to tuer le ver, or kill the worm —a prophylactic custom derived from a 16thcentury legend that deadly worms could invade the heart unless alcohol was ingested in the morning to provide immunity.

After World War II, French society changed rapidly. It became less rural and the urban masses found themselves unable to maintain the leisured pace that included a long lunch—the main meal of the day— usually accompanied by wine. Competition in the new globalized economy has ensured that French workers these days are just as likely as their American counterparts to eat a lunchtime sandwich at their desks instead of sitting down to a meal at the office canteen or a nearby bistrot or café. The days when the French would consume a carafe or more of wine with lunch at a local estaminet are long gone, just as the length of the average workday lunch break has shrunk from over an hour and a half in 1975 to a mere half-hour. This helps to explain why French bistrots and brasseries have been going out of business at a steady clip (the profit margin is in the booze) and why the number of fast-food outlets has grown at a 5% annual rate for the last decade, according to the latest issue of Francoscopie, a biannual survey of “tout sur les Français”. (Published by Larousse, the 2013 edition is a tightly packed 590-page tome.)

But the shrinking lunch hour is only part of the disappearing wine story. The reason that the French are consuming less alcohol in general and wine in particular has other explanations including, in recent years, the global financial crisis that has forced the French, like almost everyone else, to tighten their belts. The government’s draconian drink-drive laws have had a major impact on all alcohol consumption, and there’s no doubt that the French have also become more health conscious, cutting back on both alcohol and tobacco—even though the so-called French paradox would suggest they should keep imbibing wine for its healthful, antioxidant properties. The health benefits of the booze cutback have been impressive, with a 40% decrease in deaths directly attributable to alcohol (excluding road accidents) over the past 25 years.

Is it possible, however, that lurking behind the statistics and obvious explanations there are other, murkier forces at work? Are we, for example, witnessing a national identity crisis? If wine is such an integral part of the image of France and Frenchness, could it be that the decline in wine consumption represents a rejection by the French of their culture and heritage—or at least a loosening of the bonds that bind the French together not just as a nation but as a people? Could it be that the France we love (and sometimes love to hate) is morphing into something less recognizably French, more fragmented and a bit wine-weary?

These are good questions and I’m glad I asked them.

The broad answer is that France is changing— for better and worse. But before we start blaming wine or the lack thereof, we should put the numbers in perspective. It is true that French wine consumption has declined dramatically. But the French, according to most trade and industry statistics, are still far and away the world’s largest per capita consumers of wine—if you exclude the 800-or-so inhabitants of the Vatican City State (all that sacramental wine) and tiny Norfolk Island, a self-governing territory of Australia, pop. 2,300 (too many sundowners?). Americans may collectively drink more wine than the French and, as recent statistics confirm, the US has become the world’s largest wine consumer. But on a per capita basis, Americans drink a mere 12.5 bottles per year, compared with France’s 76.

The big question is whether, if trends continue, France will reach what Al Gore called a “tipping point”—the moment at which a movement in a certain direction becomes an unstoppable stampede or avalanche. It used to be said of the French that they would do anything to support their movie industry except actually go out and watch French films. Extrapolation of the French wine consumption curve suggests that a time will come when the country most identified with wine production no longer drinks the stuff.

Could that happen? On a long enough time line, the survival rate for everybody drops to zero, and it is possible that, given enough time, wine in France might become a distant memory. But there are some encouraging signs out there that suggest France is not about to abandon a major component of its connoisseur image. Although the French are drinking less wine than they used to, what they are drinking is of better quality. Francoscopie reports that since 2008 vin ordinaire (table wine) sales have slipped below those of higher quality wines. Restaurants will continue to deplore the French trend towards drinking wine at home (another marked trend), but there is some evidence that the French are rediscovering their culinary roots. Kitchens are becoming a focus of French homes not just as places to cook but to entertain. And when it comes to attitudes towards food, although 44% regard it primarily as a necessity, almost 41% see it also as a source of pleasure. Again according to Francoscopie, cooking is increasingly regarded as a pleasure rather than a chore, and a whopping 81% of French people— mainly women, but also around 38% of men, especially the younger generation—claim to indulge: 52% regularly and 29% from time to time.

This bodes well for the future of the French gastronomic meal. But let’s hope that as the French are dishing out meals from soup to nuts they realize that wine, as the sages at UNESCO have recognized, is an essential ingredient. As one of the founders of the French gastronomic tradition, Jean Anthelme Brillat-Savarin, once observed, “the destiny of nations depends on how they nourish themselves”. He almost certainly considered wine to be part of that nourishment.

Originally published in the March 2013 issue of France Today.