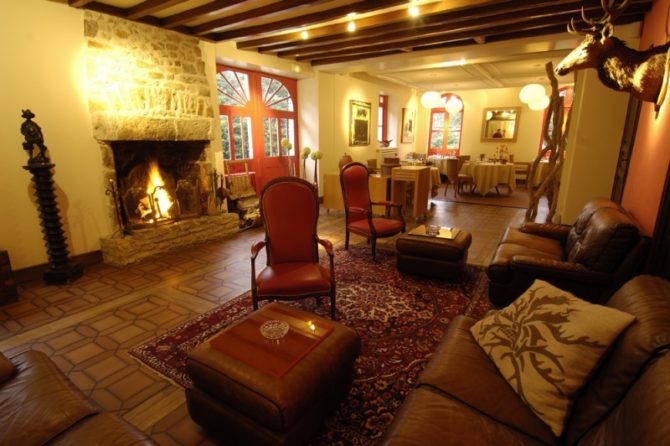 Though I have a weakness for faded spa towns and forgotten resorts, I’m relentlessly demanding about what I eat, and that’s why a recent lunch at Le Manoir du Lys, in a little-known corner of Normandy, was such a surprise. I’d never heard of Bagnoles-de-l’Orne, but I instantly fell for its gentle Belle Epoque aura when I arrived from the more currently chic and rather brassy Deauville. Le Manoir du Lys is just outside of town in a thick and very pretty copse of beech trees. Though I was on the outside edge of lunch service in France—1:50 pm, which usually means a negative shake of the head and shrug of the shoulders—I was greeted with warmth and charm and shown into a stylish dining room with big cloud-style light fixtures and quietly hip table service. No Grand Spa Hotel mustiness here, thank you, since ambitious and gifted chef Franck Quinton has charted a delicious course for this family affair—his sister runs their Ô Gayot hotel-restaurant in town, and his brother-in-law Yvon Lebailly was named Sommelier of the Year 2009 by the trendy Omnivore guide. I happily feasted on the “menu Domfrontais” at €45 (named after the nearby town of Domfront), which began with a superb soup of herbs with squid and crab, followed by yellow pollack in fennel cream with grenaille potatoes and a pickled lemon sauce. An “emulsion” of Camembert—one of the most delicious ways I’ve ever tried this favorite cheese—was accompanied by a salad dressed with hazelnut oil, and the finale was apple braised in butter with cider and brown sugar. Quinton’s cooking is light, original, witty and tongue-in-cheek regional, making this one of the best meals I’ve had this year, and perfect evidence that those who constantly deride France as a gastronomic has-been are just plain wrong.

Originally published in the July/August 2009 issue of France Today