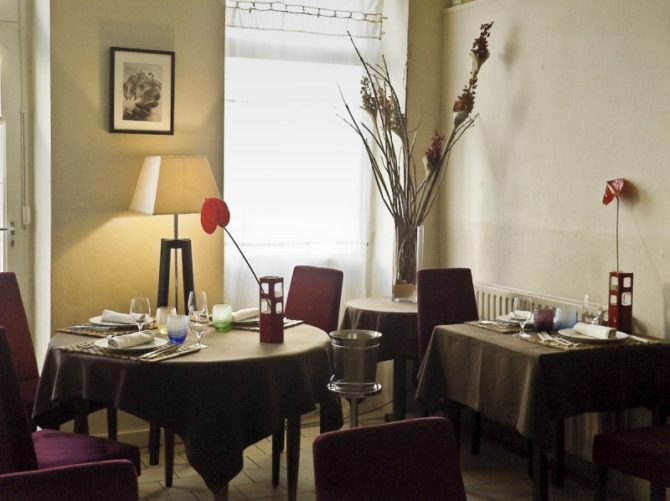 Valence, a pleasant old-fashioned French city and the capital of the Drôme region, has always been the perfect stopping point for anyone driving between Paris and Provence. In addition to the excellent if vertiginously priced three-star Maison Pic, Valence has recently seen the opening of several very good and reasonably priced new restaurants. My favorite is La Cachette—the name means a small hiding place—which was awarded a Michelin star last month. At a recent lunch, hardworking chef Ijiti Massa astonished me with the precision of his cooking and the purity of his flavors. Ijiti, who previously worked at Pic, produced a dazzling, impeccably cooked duo of lobster and langoustines with a limpid shellfish gelée and a scattering of baby vegetables, including finger-sized zucchini and cauliflower, showered with mustard leaves. Next came red tuna with foie gras, a heavenly marriage, and for dessert, Passion Chocolat, a sphere of Valrhona chocolate filled with nougatine, passionfruit ice cream and chocolate ganache, which melts when hot chocolate sauce is poured over it at the table. Delightful service and the chance to drink a terrific Condrieu by the glass added to the pleasure of this delightful meal, which, at €48 and given the quality, is one of the best deals to found anywhere in France right now.