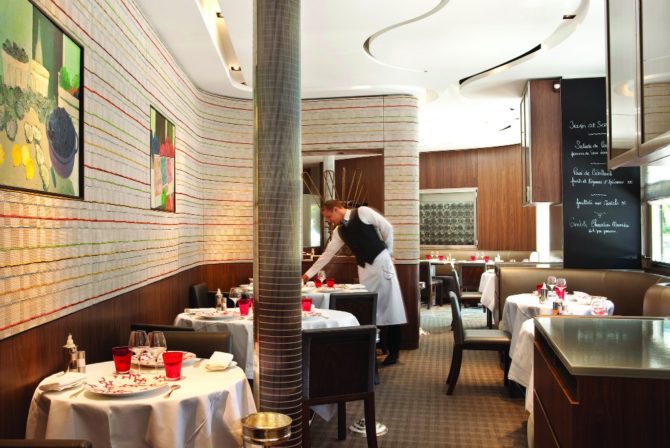 For seafood lovers, the sad modern truth is that declining catches everywhere mean these pleasures are becoming more expensive. It’s also true that more and more restaurants in France are serving farm-raised – as opposed to wild – fish, which means that if you want some seriously good poisson, you’re going to have to pay for it.

French small-boat fishermen provide the country with one of the highest quality wild catches to be found anywhere in the world and this is why I would rather go to a pricey but excellent seafood restaurant like Dessirier in Paris as an occasional pleasure than eat fish of unknown provenance at lower prices.

Dessirier is venerable two-star chef Michel Rostang’s casually elegant seafood brasserie in Paris’s silk-stocking 17th arrondissement, and a recent meal here was outstanding. The charming maître d’hôtel ushered us to a corner banquette in the sleek L-shaped dining room overlooking the Place du Maréchal Juin, and on a Sunday  night, the clientele were very much that of captains of industry in their off-hours, or men in jackets without ties.

Since Dessirier has one of the best oyster menus in Paris – they serve not only big meaty bivalves from Utah Beach in Normandy, but also the rarely seen in Paris iodine-rich examples produced by Tarbouriech in the Etang de Thau in the Languedoc – we started off with a tray of them and also splurged on a portion of sweet wild prawns.

The style of the kitchen here falls between the modish minimalism that’s prevailed at Paris fish houses for a long time and the more traditional battery of classical Gallic seafood cooking. So you can dine simply on Normandy cockles with artichokes and baby potatoes or maybe a perfect grilled sole, or opt for one of the more elaborate dishes, like the lobster vol-au-vent, which can be ordered as a main course even though it’s listed as a starter. The puff pastry cup comes to the table brimming with impeccably cooked shellfish, including mussels, clams, cockles and langoustines with juicy pieces of lobster, in a rouille-enriched cream sauce, and it’s an elegant and deeply satisfying dish.

Don’t miss the hot chocolate soufflé, which must be ordered at the beginning of the meal or if you prefer something lighter, the fine baba au rhum served with lashings of aged Martinique rum, or maybe the fresh Victoria pineapple with coriander sorbet. Two good-value prix-fixe menus at €40 and €48 can also make this table more affordable, and the service is excellent.