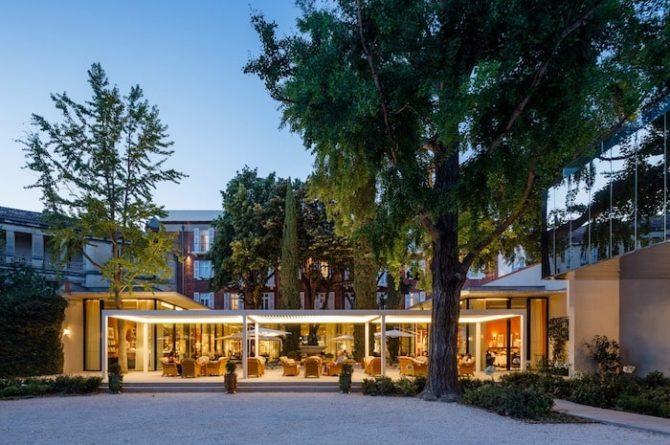 Chef Pierre Gagnaire, who holds three Michelin stars for his eponymous restaurant in Paris and runs a dozen other tables around the world, from London to Las Vegas and Seoul, had a particular mission in mind when he devised the menu for Duende, his intimate 20-seater haute-cuisine restaurant at the legendary Hôtel L’Imperator in Nîmes. “I wanted to create a restaurant that would become a local institution and a gastronomic reflection of the city,” says the relentlessly inventive septuagenarian.

To accomplish this, he sampled the city’s foodie scene and scouted out the best local suppliers of everything from olive oil – his favourite comes from Oliveraie JeanJean – to the best vendors of the catch-of-the-day brought in at Le Grau-du-Roi, France’s second most important Mediterranean fishing port an hour south of the city. Then he sat down with chef Nicolas Fontaine, a native of Nîmes who had worked with him in Paris for 15 years and who is acting chef at both Duende and l’Impe, the brasserie that is the Hôtel L’Imperator’s second table. Together they drew up the menu at Duende, which is served as part of the six- and 10-course tasting menus.

Dining on the 10-course menu in July, it was a suave, sophisticated and spectacularly creative succession of dishes with distinctively southern French roots. The meal began with an intricately deconstructed two-plate version of bouillabaisse, which included a clarified saffron-seasoned fish broth lapping chopped sardines and mackerel with fresh coriander and braised artichokes, and a side of octopus with poutargue (preserved salted fish eggs) shavings and a brunoise of melon and celery. The percussion between these two dishes reminded me that Gagnaire, a serious Miles Davis fan, often describes himself as a jazzman in the kitchen, which means he reflexively riffs unexpectedly and emotionally with different textures and juxtapositions of flavours.

A stand-out among the dishes that followed was a dish of violets, a potently briny crustacean from the Mediterranean and cod cheeks, in which the creaminess of the shellfish anointed the firm cut of fish and teased its gentle flavour without overwhelming it; black rice from the nearby Camargue and pine nuts brought an earthy touch to this elegant and perfectly balanced composition. The aubergine-stuffed cannelloni with tiny escargots from la Vaunage tacked the meal in a satisfyingly ruddy earthy direction, and then the best dish of the evening arrived.

A post shared by L’Imperator (@maisonalbarhotelsimperator) on Jan 6, 2020 at 9:00am PST

It was a stunningly subtle, but intensely fleshy, composition of a crépinette of veal (finely ground veal bound in caul fat) garnished with vegetables which had been roasted with oregano, and a delicate beignet of calf’s brains with capers, red beets and black cherries. Delivering a full spectrum of earthy, moody tastes, it was a fascinating dish imbued with a carnal elegance and a poignant sensuality.

Service is flawless in this handsome dining room, which boasts contemporary décor by Franco-Brazilian interior designer Marcelo Joulia Naço and French doors leading out to a courtyard garden. Talented young sommelier Logan Thouillez pours a supremely original selection of wines by the glass – the wine-pairing is very much recommended with this tasting menu. The wine I most hope he’ll be serving when you dine here is the elegant, mineral-rich, slightly saline biodynamic rosé made by Danish winemaker Rasmus Aamand Olesen at his Domaine de Nénu winery in Collioure on the French/Spanish border.