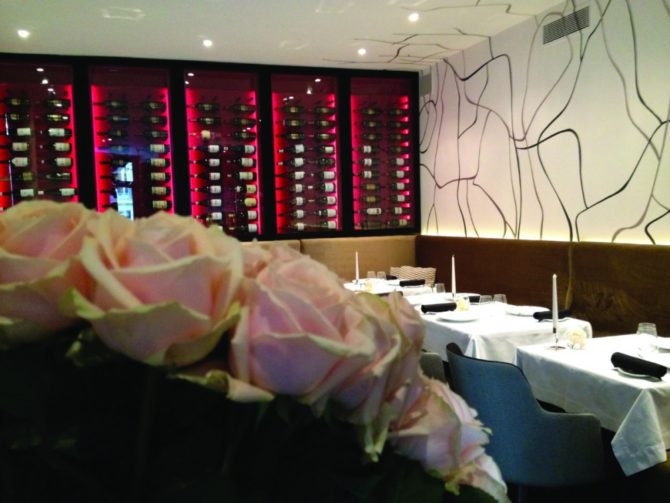 Italian-born sommelier Enrico Bernardo is one of the most interesting and original restaurateurs in Paris today. He worked at the Four Seasons Hotel George V Paris, where he won the prestigious title of Meilleur Sommelier du Monde (world’s best sommelier) in 2004, at the remarkably young age of twenty-seven. This honour followed Bernardo being named Best Sommelier in Europe 2002, Best Sommelier in Italy 1996-1997 and Master of Port, Italy 1995.

He opened his first restaurant in 2005, the aptly named Il Vino, and it turned many Parisian conventions on their heads, since the idea of this suave table was to showcase food-and-wine pairings. To wit, you ordered your wine or wines before your food and then the chef prepared a meal which was intended to create the most elegant and logical of liaisons between these two infinitely interconnected realms of gastronomic pleasure.

On the occasion of the fifth anniversary of his restaurant, Bernardo shrewdly revised the original formula, redesigned his dining room and appointed a new chef, the remarkably talented young Catalan cuisinier José Manuel Miguel, a native of Valencia who also designed the menu at Bernardo’s second Parisian table, Goust. Miguel, who’s worked at Martin Bersategui outside of San Sebastien in the Spanish Basque Country, and more recently with Eric Frechon at the Hôtel Le Bristol, possesses one of the most nimble gastronomic imaginations of any young chef in Paris, so he rises to Bernardo’s food-and-wine pairing with delicious wit.

Rather unexpectedly, this adventurous restaurant has become a favourite of the French establishment – the Assemblée Nationale, UNESCO and a variety of other power bastions in the 7th Arrondissement are on its doorstep, which makes it an interesting destination, not only for anyone in search of an exceptionally good meal with intriguing wines, but also for students of Paris in toto.

Invited to dinner by a friend who’s the cultural attaché to UNESCO from large South American country, we began our tasting menu with a delicate carpaccio of red shrimp from Albegna in Italy, garnished with limonello sorbet and Osciètre caviar. Bernardo teamed this delicate dish with an elegant, vaguely lemony Sancerre Fournier Père & Fils 2011.

Next up, a beguiling composition of cep mushrooms, eel, watercress and baby potatoes served with a 2006 Giorgio Pelissero Nebbiolo d’Alba. This surprised both of us, since red wine is rarely served with eel, and the casually elegant Italian red was a success, with its tannins proving a fine match for the peppery cress and the eel. The other highlights of our exceptionally sophisticated and cosmopolitan meal included an egg cooked at a very low temperature for hours so that it had almost become a soft custard with lardo di Colonnata (salt-cured Italian fatback), potato cream and a generous tableside garnish of shaved white Italian truffles from Alba, which was paired with a 2006 Carlo Giacosa Barbaresco Montefico, and wild duck with chanterelle mushrooms and a risotto of wheat berries, served with a 2006 Château Ferran from the Entre Deux Mers district of Bordeaux.

However, it is not necessary to be a serious wine connoisseur to enjoy a meal at the new Il Vino, since the whole idea of this restaurant is to gently expand the viniferous knowledge of people who love wine and to tutor curious debutantes.

Originally published in the February-March 2014 issue of France Today