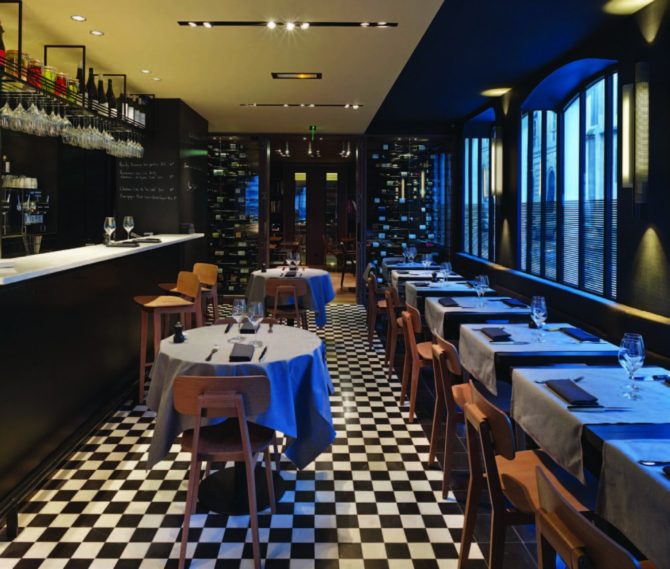 As the man who continues to reinvent the Paris bistro, talented Bruno Doucet has become one of the most influential chefs in the French capital ever since he bought the cult bistro La Régalade from founder Yves Camdeborde in 2004. Tweaking the bistro register of Camdeborde by looking beyond the boundaries of France for culinary inspiration – one of Doucet’s best-loved signature dishes, grilled prawns with vermicelli in curried coconut milk, is a perfect example – he opened a second branch of La Régalade on the right bank (the original is deep in the 14th arrondissement on the Left Bank) in 2010, and this spring he’s launched a second right bank address at the beautiful new Hôtel de Nell in an up-and-coming corner of the previously sleepy 9th arrondissement.

This striking dining room with a chequerboard tile floor, custom-made raw oak chairs and hand-made wrought-iron fixtures on the bar was designed by star interior designer Jean-Michel Wilmotte, and it’s a stunning and un-Parisian setting in which to have a meal, which is why it’s packed to the rafters with be-suited bankers at noon – the HQ of Banque Nationale de Paris is just around the corner, and then pulls a style-conscious creative crowd in the evening. Doucet’s menu changes all the time, but dishes to look out for include marinated salmon with fresh herbs; demi-sel (salt-marinated) cod steak on a bed of wilted baby spinach garnished with tiny cubes of chopped tomato, crumbed hard-cooked egg and microscopic croutons in a light vinaigrette; and rhubarb compote with crème fraîche.

Restaurant columnist alexander lobrano lives in Paris. His book Hungry for Paris is online in the France Today bookstore.