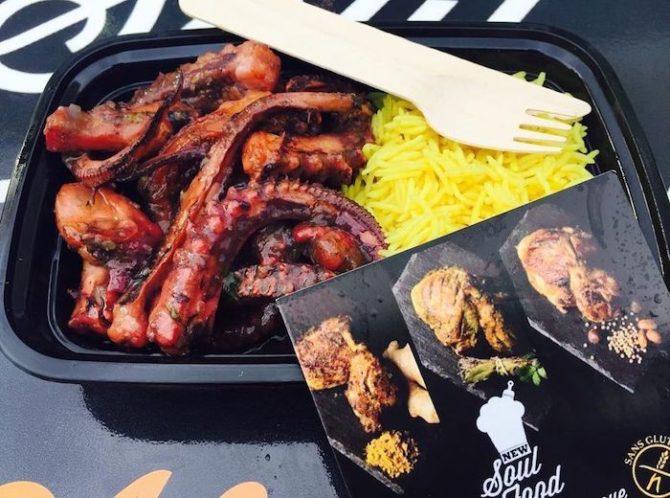 Even during a year of historic disruption, the Paris restaurant scene continues to evolve in intriguing ways. One of the most interesting new trends during this turbulent time is the emergence of several new African and Caribbean restaurants in the French capital. One such is New Soul Food, a casual dining experience that was recently opened by the Canal Saint-Martin in the 10th by Cameroonian-Guadeloupean chef Rudy Lainé, who previously worked at Fauchon, Le Grand Véfour and Laurent in Paris, and his brother Joël, a trained pastry chef.

There have always been a few African and Caribbean restaurants in the French capital, but until now, these kitchens never broke into the mainstream of Parisian dining habits. With the inventive hybrid menu of contemporary African and French Caribbean dishes on offer at New Soul Food, this looks set to change.

The menu runs to a clever contemporary roster of what the brothers describe as Afropéenne (Afro-European) cooking. It includes dishes like herb-braised chicken with attiéké (manioc semolina with dried tomatoes and herbs) and yassa sauce, which is made with onions and lemons; an Afropoke bowl with shredded barbecued chicken, red beans, roasted maize, plantains and a sauce créole (peppers, tomatoes, onions); and Afrobassa, or spiced prawns en brochette with m’bongo tchobi (an earthy, spicy black tomato sauce from Cameroon). Hearty and full of flavour, these dishes make for an original and very satisfying meal, and weather permitting, you can get them as takeaway, too, to eat on the banks of the Canal Saint-Martin.

Previous Article The Sunflowers of Provence
Next Article Vincent Lacoste, a Cannes Veteran