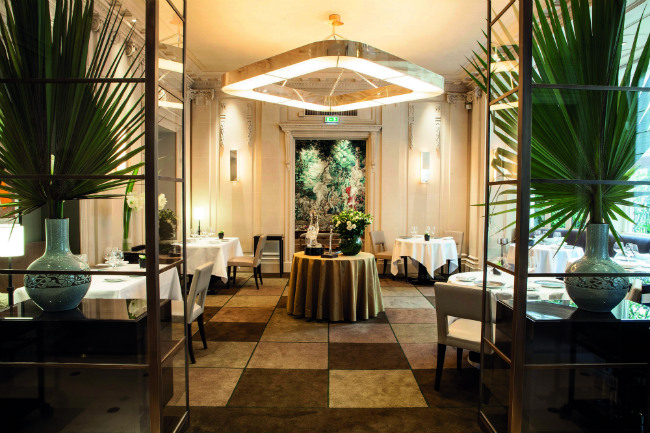 Named after Taillevent, a 14th-century chef and cookbook author whose real name was Guillaume Tirel, this exquisite restaurant on the quiet rue Lamennais has been an exemplar of Gallic elegance ever since it opened in 1946. First dining here in 1988, I’ve been privileged to know four of the six chefs who’ve helmed the kitchen here, including, in order, Claude Deligne, who won the restaurant’s third Michelin star, Philippe Legendre, Michel del Burgo and Alain Solivérès, who cooked here from 2002 until earlier this year.

Now Le Taillevent has both a new chef, and almost as importantly, a new maître d’hôtel, because the experience of this restaurant’s hospitality has always been the vital corollary to its gastronomic excellence.

This was something I learned the first time I dined here. Invited to lunch by a famous Paris fashion designer when I was an editor in the offices of a famous American fashion publishing company, I decided I’d walk from my office, because it was such a beautiful spring day. Two thirds of the way to the restaurant, however, the weather changed, and torrents of rain poured out of the sky, seemingly from every direction, so that without an umbrella and unable to get a cab, I arrived at the restaurant soaked to the bone. I was actually such a wreck that I dared not go into such a fancy place dripping wet. So I stood across the street for a few moments of soaking indecision. The next thing I knew, a man in a beautifully cut suit and a huge, taut, slate grey umbrella darted across the street to fetch me.

“Bonjour and please come with me,” said Jean-Claude Vrinat, one of the most elegant, cordial and charming men I’ve ever met and the owner-director of Le Taillevent until his death in 2008. In the vestibule, he said, “What a nasty day! Now let’s get you dried off for lunch”. When I emerged, he helped me into a nice dry blazer and escorted me into the dining room, where the fashion designer was busily drawing a dress in a sketchbook when I arrived at the table.

Le Taillevent’s new chef is David Bizet, a native of Normandy who previously cooked at L’Orangerie at the Four Seasons Hôtel George V, and the new director is the young and very gallant Antoine Pétrus, who most recently worked at Le Clarence. With such promising casting, I eagerly went to lunch at Le Taillevent on an Indian summer day in Paris. The dining room was populated by American and Asian tourists and French business diners worrying about the price of oil, the impact of Brexit, and Trump.

“The menu is completely new,” Pétrus advised, and then helped us construct our meal. We began with a crustless tart of leeks that had been baked inside a crust of truffle salt topped with a “mimosa de cèpes”, or sieved hard-boiled egg with sautéed and fresh ceps, and a scattering of flower petals to produce one of the most Instagram-ready dishes in Paris today. It was very good eating, too, as was our next course of steamed wild salmon caught off the coast of Normandy and served with thimble-sized turbans of cabbage with ginger, oyster and caviar and a red currant coulis. Vivid, often acidulated and almost fat-free, Bizet’s cuisine marks a major evolution for Le Taillevent, which has edited its definition of gastronomic luxury to correspond to the changing tastes of the 21st century.

Meat courses – wild duck cooked inside a fig leaf for my friend, and veal sweetbreads lacquered with réglisse and served on artichoke hearts with currants for me – demonstrated impeccable technique, a lot of miniature art direction, and a continuing preference for polite tones of acidity that temper the richness of meat and wild game.

The meal ended with the sublime pastries of Japanese pastry chef Kimiko Kinoshita – roasted fig with vanilla and toasted cereals and Williams pear with black lemon, sudachi sorbet and caramelised hazelnuts. Note, too, that the venerable wine list now includes a variety of excellent bottles in the €40 to €70 price range, and that it also features an array of foreign wines as well as French ones. And so Le Taillevent has been reborn for a new century.

Previous Article Carnival in France: Our Favourite Fêtes from Nice to Annecy
Next Article The Fête du Citron: The 2019 Lemon Festival in Menton