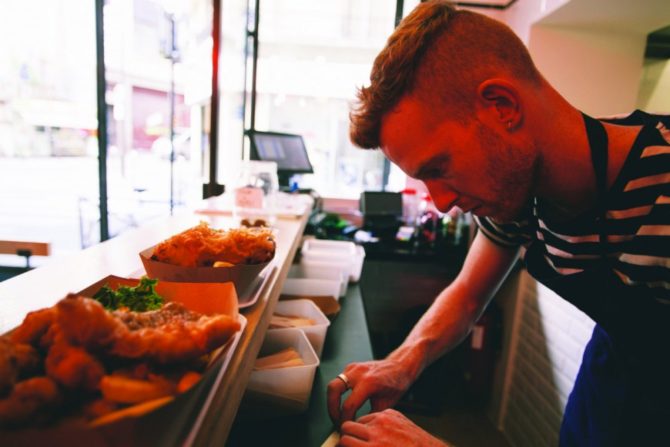 Truth be told, the decision to put mushy peas on the menu at Paris’s first fish-and-chip shop wasn’t an easily done deal. Oxford-raised chef Michael Greenwold and fellow Brit-in-Paris James Whelan aren’t saying which one of them balked at trying to tempt Parisians with this Anglo comfort-food staple, but one of them prevailed – sort of. Instead of the brown mash usually found at fish and chip shops, their Paris version is bright green, because it’s made from petits pois, and refreshingly seasoned with chopped fresh mint.

The differences don’t stop there either. If you find bottles of malt vinegar on the table at this white-tiled storefront place in the trendy 10th arrondissement, along with a back wall filled with canisters of English sweets, their version has a certain je ne sais pas quoi not normally found in Blighty. Chalk it up to the fact that Greenwold is one of the two chefs at the hugely popular Roseval bistro in the Belleville district (the other is Simone Tondo) and that Whelan also has an impressive culinary CV, but the batter on their yellow pollack, sea bream, monkfish nuggets, and squid is light as a feather, and the quality of the fish is every bit as good, which is to say very, as you’d find at any serious Paris restaurant, since it comes from cult Breton fishmonger Thomas Saracco.

Lest anyone think they’ve become too fancy for their own britches, batter-dipped-and-fried sausages, an honourable chip butty and pickled eggs and onions are also on offer. Eat in or take away to devour on the banks of the pretty Canal Saint-Martin just at the end of the road.