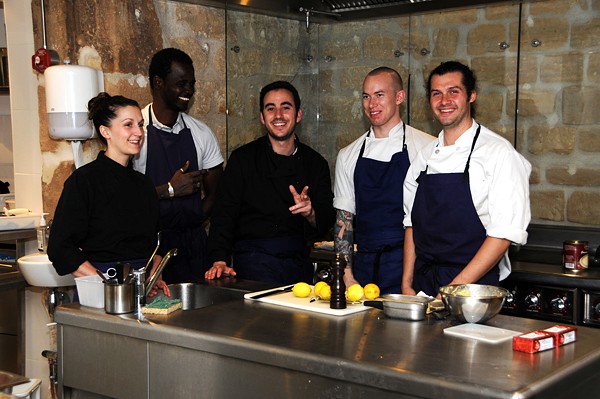 The most talked about opening in Paris this fall is the new incarnation of Chicago-born chef Daniel Rose’s restaurant Spring, where the team of three chefs headed by Rose wisely used the quiet summer months to break in the stainless steel open kitchen that’s the centerpiece of the €1.3 million renovation that’s turned a former skateboard shop in a 17th-century house into a stunning three-level restaurant, with a basement tapas bar and a third-level wine cellar. I’ve loved Rose’s food ever since I first ate at his original shopfront quarters in the 9th arrondissement, but in his austerely glamorous new digs near Les Halles, he’s really come into his own as one of the most assured and inventive young chefs in Paris. Rose told me that what he wanted to do with the new space was “create a new style of Paris restaurant for the 21st century,” and he’s succeeded admirably—his new Spring falls into no existing categories. His lunch concept is intriguing—the midday meal is built around delicious bowls of bouillon garnished with baby vegetables and either grilled chicken or squab, with a variety of intriguing side dishes to order if you’re really hungry. I’ve eaten here several times now, and each meal was better than the last, including a recent dinner that began with eggplant cooked four ways and continued with warm, lightly smoked tuna draped over yellow tomatoes; veal breast with langoustines; and sautéed squab with cucumber; followed by a delicious olive-oil ganache with red currants. Light, inventive and technically impeccable, Rose’s cooking is terrific.

Prices are per person without wine.

Originally published in the September 2010 issue of France Today