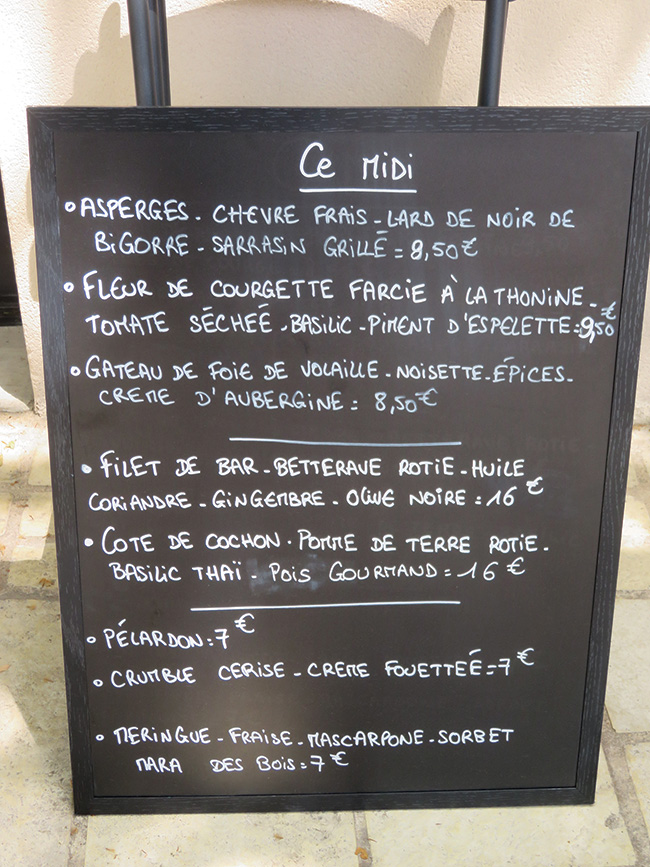 So it turns out that the French novelist André Gide was rather prophetic. “Oh little town of Uzès!,” he wrote affectionately of his father’s hometown in the south of France in his 1924 memoir, Si le grain ne meurt. “If you were in Umbria, Parisians would be visiting you in herds!” Well, even though Uzès remains firmly in the Gard département between Nîmes and Avignon, Parisians – along with Americans, Brits, Belgians, the Dutch, the Swiss, and others – have still fallen head over heels for this enchanting town.

And I know of what I speak, because we have a place in a village a few miles west of Uzès. Happily, this influx of worldly and well-travelled people hasn’t, however, disrupted or damaged the rural authenticity of the Pays d’Uzès, although it has finessed its restaurant scene a bit.

A perfect insight into the way the locals like to eat in Uzès is offered by the chalkboard menus served here, too. Think local seasonal produce carefully cooked with a perfect punchy pinch of culinary wit, or the white asparagus with fine ribbons of jambon de Bigorre ham and a black-olive vinaigrette that we had as a first-course for lunch at a table on Le Barry’s small, charming terrace. Next, we both chose the roast pork with a verveine jus, mangetouts and baby potatoes, a dish of grand-slam succulence.

Desserts were lovely, too, including a delightful pavlova with strawberries and a rhubarb crumble. The wine list runs mainly to moderately priced local quaffs, and the service is friendly and relaxed but attentive from a team who formerly worked at Le Tracteur, another popular local table in Argilliers. This place has become extremely popular since it opened, so reservations are essential.

Lead photo credit : Barry in Uzès is all about local seasonal produce served with plenty of culinary panache © Alexander Lobrano