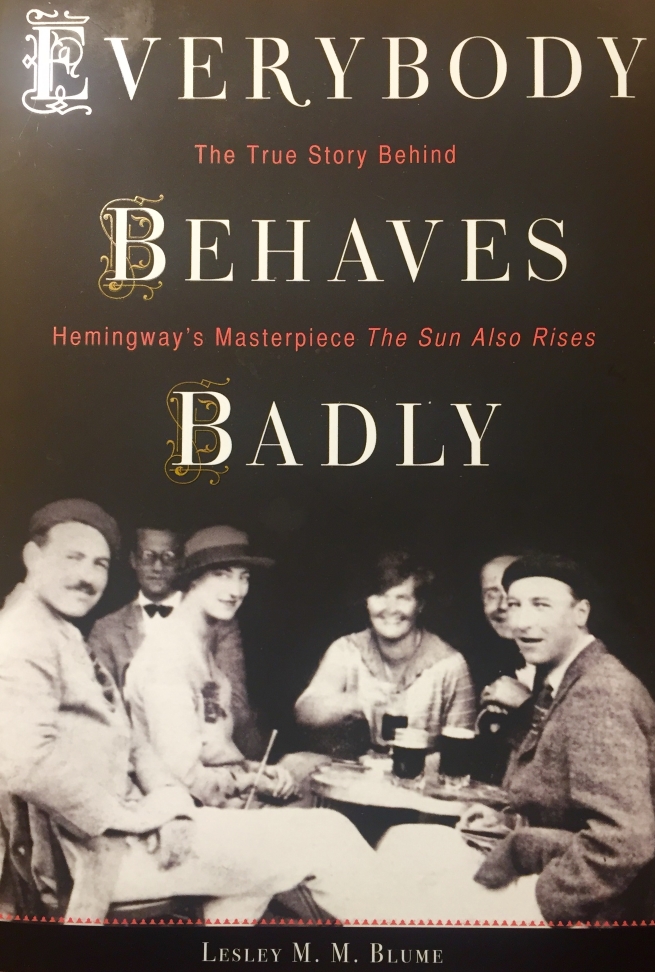 “He moved the setting of his new novel to Paris. ‘To understand what happened in Pamplona, you must understand the Quarter in Paris, [Hemingway] wrote.”

Noted journalist Lesley M. M. Blume in this 2016 release gives us the rich backstory of Hemingway’s seminal novel The Sun Also Rises, the novel that catapulted him to the top of the literary world in the mid-1920s.

As you might remember, The Sun Also Rises is about a group of ex-pats living in Paris in the 1920s, members of an elite crowd of American and French artists and writers. The group goes on an excursion from Paris to Pamplona together to see the annual running of the bulls – spending most of their time eating, drinking, having sex and generally behaving badly, thus Blume’s title.

From Blume’s book, we learn how closely art imitated life in this case, and the fallout that occurred because of it. As one critic at the time said, “The Sun Also Rises was journalism with just enough fiction…to permit Hemingway to get away with calling the book a novel.” The characters of the novel, which Hemingway portrayed less than favorably, were so close to their real counterparts as to be recognized on the street. Most were not happy and the publishing of this novel ended many a friendship. He was “eating his own,” Blume says referring to the many mentors and friends he subsequqently ‘backstabbed’ in The Sun Also Rises.

Blume’s book details Hemingway’s life in Paris leading up to and following the birth of this book. (In a letter to his wife, Hadley, who lived with, and suffered with, Hemingway through this process, Hemingway referred to the book as their “second child together.”)

Through its pages we see three parallel stories running at the same time: the story of the American ex-pats in Paris in the 1920s; a close look at Hemingway himself (Blume has done her research); and finally, we get a a look at the revolution in art and literature that took place at this time and how it was reflected in the works of artists such as Picasso and Hemingway.

‘“His was a bare, savage content rendered in a bare savage style. There was no shelter in that writing, nary an adjective to shade readers from a harsh sun.”’

We also learn that although Hemingway himself did not intend the book to be about the generation of his time (the Lost Generation as Gertrude Stein dubbed it), it nonetheless was hailed as such, and adopted by the youth of the time as a blueprint for life. Now, the tables were turned and life, at least among the youth, began imitating art as they flocked to Paris and tried to recreate this romantic and bohemian lifestyle ala Ernest Hemingway.

There are many descriptions of Paris in the book, the restaurants and streets that these ex-pats co-opted for their ‘debauchery.’ If you’re looking for a good read on your next trip to Paris, pick up this book and also a copy of The Sun Also Rises. Read the novel first and you’ll get an even more enjoyable ride with Blume’s book.

Everybody Behaves Badly is available online on Amazon.