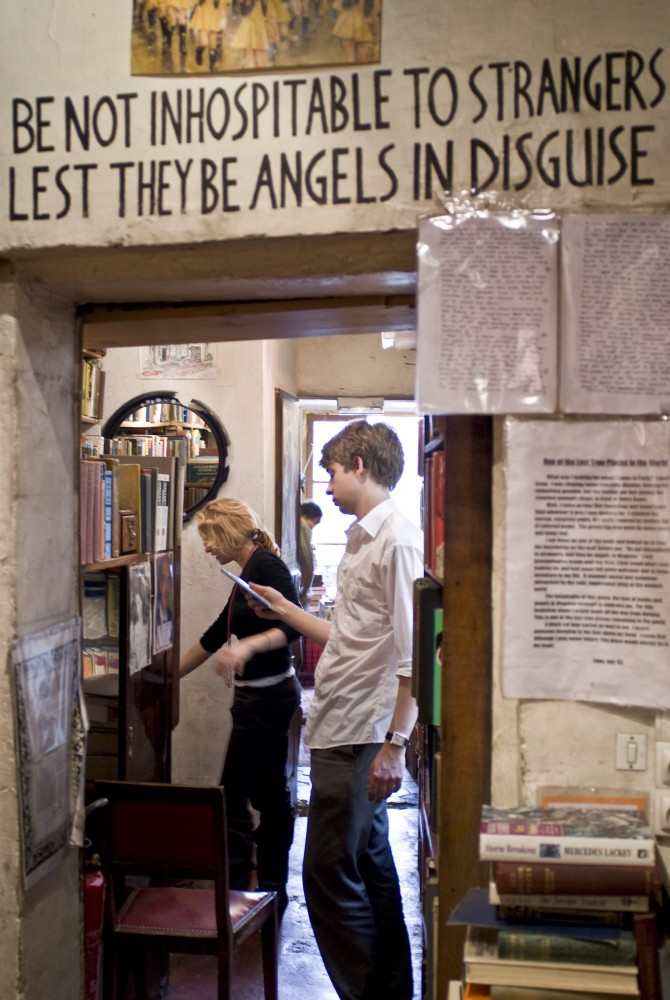 The view from the front window of the ramshackle bookstore looks out past a few trees to the river Seine and beyond to Notre Dame, towering high on the Ile de la Cité. No. 37 rue de la Bûcherie is home to Shakespeare & Company, a Parisian writers’ and readers’ institution whose longtime owner, American-born George Whitman, lived in a third-floor apartment above the shop until his death last December. Before George, the neighborhood, one of the oldest in Paris, was occupied by a monastery.

According to George, the name and the spirit of Shakespeare & Company were given to him in 1958 by Sylvia Beach, the owner of the original Paris bookstore of that name. Opened in 1919, Beach’s store moved to 12 rue de l’Odéon in 1921, where it became the center of Anglo-American literary life in Paris, a favorite haunt of Hemingway, Fitzgerald, Gertrude Stein, James Joyce and many others. Forced to close the store during World War II, Beach never reopened it.

Several years later Beach announced she would pass on the name (and spirit) during a reading by Lawrence Durrell at the bookstore George Whitman had opened in 1951, at the time called Le Mistral.

Beach and Whitman shared a belief in operating their businesses as lending libraries as well as retail bookshops, providing a place for authors and poets to congregate and present their work, and even a place for them to sleep and eat. Beach died in 1962. According to Whitman, in her will she left a number of books from her private collection to him, and the legal rights to the name Shakespeare & Company. When his only daughter was born in 1981, Whitman named her Sylvia Beach Whitman—when you meet Sylvia Beach II today, it feels as though nothing has changed within the literary landscape of Paris.

Asleep, grumpy or out

Sylvia grew up mostly in England, and attended University College London. Almost ten years ago, at the age of 22, she assumed management of her father’s business and revitalized what had become an endangered institution.

According to George, in anticipation of his death, developers were trying to buy every apartment they could in the bookstore’s building. Their intention was to turn the building into condominium apartments that could boast a view of Notre Dame. Sylvia Whitman now owns the bookstore space and several other apartments in the building, including the one on the third floor. She purchased another space next door in 2009 and, rumor has it, a café may open there. The developers are in retreat for the moment.

My photographer husband James and I were newcomers to Whitman’s Shakespeare & Company on our first visit in the winter of 2003. James asked George about the possibility of shooting his portrait but, said George, the timing wasn’t right—he was busy tending the till. On subsequent visits, he was either asleep, grumpy or out somewhere. In February of 2007 we happened to see him leaning out the third-floor window, looking across at Notre Dame. James took a quick snap to record the lucky moment and tried to satisfy his desire to photograph George by shooting other inhabitants of the bookstore including Jonathan, a brainy young kid from Ireland who would soon be on his way to study at Oxford after living at “S & Co” for a time.

People still live at the store today. Moments after closing time at 11 pm, the residents move piles of books aside and sleep on makeshift beds that double as book display platforms during the day. Under Sylvia’s management, the tradition continues at the “Hotel Tumbleweed”, George’s nickname for the overnight operations.

The general rule is that you are allowed to sleep in the store if you are a writer, though we understood from George that he sometimes stretched the term to include musicians, artists and young women. The first step toward entry was to show George your manuscript, write a short autobiography and, if he approved, you were in rent-free, in exchange for working the check-out desk, re-shelving books, cleaning and errand-running.

When we first met Sylvia, she told us she was intent on keeping the eclectically cluttered place intact, except for some welcome changes including regular cleaning, the opening of the normally closed “collectibles” branch next door and the installation of a cash register to replace the disconcerting rounding off that occurred due to sales being tallied in someone’s head. (To note, the rounding off was always down to keep customers happy.) Today paying with a credit card is perfectly acceptable. Sylvia also reluctantly gave in to the city’s mandate to replace the rickety staircase that led to the second floor lending library and children’s area with one that met city building codes.

On a visit to Paris in 2008, James and I made our usual stop at S & Co to get the weather report on George. Shooting a portrait that morning was a no-go, but Sylvia suggested we try coming back after lunch. We returned around 2:30, with our young friend Josh along to help, just in time to see Sylvia leading George into the stairwell for his daily journey up the three winding flights. When she returned to the store, James asked her what she thought about the possibility of taking some pictures, and she said, “Sure, give it a try, the door’s open, just go on in”.

James was reluctant to open George’s door when he didn’t answer to our knock, but in we went, introducing ourselves. George responded by asking James “Have I read you?”, making the assumption he was a writer. James said “No, but I’d like to shoot you”. George rose to his feet from his small bench-like perch, where he was working on a plate of leftover chicken kept warm by a metal-can contraption placed over a Bunsen burner. He proclaimed in a commanding voice: “OK, let’s get it over with! Should I change?” He was wearing a baggy pair of pajamas. We agreed that, “No, it’s not necessary,” and helped George settle in at the front window alcove, where a small table and two chairs neatly fit.

George seemed happy to be having his photo taken, gazing out the window toward Notre Dame, chin held high, looking like Moses with his electrified hair and deep grooves in his face. We almost expected him to bellow out the Ten Commandments—although, we imagined, George might sport his own unique version, including “Read a book a day”. Minutes into the shoot he generously told us, “You can sleep here if you want”. Later, Jemma, one of the bookstore attendants we’d come to know, said she thought he was probably speaking only to me, not James and Josh.

I considered my chance to sleep in the bed where, George claimed, “the poet Lawrence Ferlinghetti sleeps when he visits every year”. I asked George if Larry Ferly (as Julia Child claimed he was called when she met him in 1948) was planning a trip over any day soon. “Yes, next month,” he said. “We’re having a contest to see who can outlive the other and I’m winning.”

George was five years older than Ferlinghetti. The two nurtured a number of connections between their respective bookstores. Ferlinghetti’s City Lights in San Francisco opened in 1953, two years after S & Co. At the time, S & Co was still Le Mistral, named, said George, in honor of “the first girl I ever fell in love with”, whom he met shortly after he arrived in Paris in 1948 to study at the Sorbonne on the G.I. Bill. A book series published by Ferlinghetti’s City Lights is carried at S & Co, and the staff at both refer to themselves as “sister bookstores”. Ginsberg and other beat poets performed often at S & Co starting in the early 1960s. Not long ago, Ferlinghetti read from a new collection of his work to a standing-room-only crowd that spilled out into the street.

With the portrait of George in the can and the light fading, we sensed his energy for the camera was exhausted so we packed up and left, promising to come back soon. Downstairs, Sylvia seemed happy that it had finally worked out. We asked about her plans for the bookstore and she told us she intended to turn her attention to publishing, once the computer system was running smoothly and the inventory completed. We bought a first UK hardcover edition of James Thurber’s Further Fables For Our Time from the collectibles section.

Subsequent shoots found George more and more often confined to his apartment but still spirited in conversation. On one visit, we brought our daughter Madison and her friend Nettika. Living up to his reputation, George was immediately drawn to the young women. In an interview with the British newspaper The Independent he was once quoted as saying, “I created this bookstore like a man would write a novel. And the girls who come in here are coming into a novel.” George informed us with a twinkle in his eye, that “the day I turn 100, I’m retiring”.

Remarkably, George almost made it to age 100, falling just two years short when he died on December 14, 2011, two days after his 98th birthday. He spent his last days at home, surrounded by photos of his friends, with his black dog Colette and his white cat Kitty by his side. Regal in exquisite deep purple silk pajamas, he sat propped up against red and lavender pillows covered by a paisley quilt, with his daughter close by providing all the happiness he could want. She read to him daily, satisfying his voracious desire to read “a book a day”—a recommendation he made to all the inhabitants of Hotel Tumbleweed. From his third floor retreat, George could listen to the voices of new authors reading their works, musicians playing their original music and the bells of Notre Dame wafting in. He is buried in Père Lachaise cemetery.

Under Sylvia, Shakespeare & Company’s renaissance is now in full swing. Readings, workshops and music events are regularly scheduled. She’s launched S & Co’s Paris Literary Prize, a €10,000 award for a novella by an unpublished author. And since 2003, four glittering festivals have begun to attract galaxies of international literary stars back to Shakespeare’s little shop on the Seine.

Originally published in the April 2012 issue of France Today