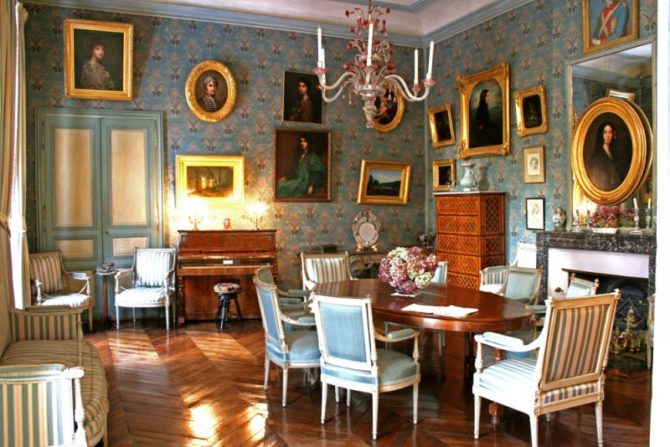 In the southern part of the historical province of Berry, south of the Loire Valley and west of Burgundy, lies a region of gentle hills that George Sand christened the Black Valley. “All the hilltops are wooded, which gives our distant views a beautiful blue color that turns to violet and almost black on stormy days.”

Blue Valley? Black Valley? It doesn’t really matter. The bucolic landscapes that surround the novelist’s family château in the village of Nohant, in the département of the Indre, have lost none of their charm. Sand and Frédéric Chopin spent long summers there for seven years, from 1839 to 1846, skipping only 1840, when she was upset by the failure of her play, Cosima, and he was ill. And it was at Nohant that the musician composed most of his works for piano, from the Third Sonata to the last of the Grand Polonaises.

The bicentenary of Chopin’s birth is being celebrated with great ceremony all over the world this year. In Berry, the planned concerts, exhibits, lectures and theatrical events will commemorate a different Chopin, far removed from the Parisian salons and the Polish émigré intelligentsia. At Nohant, it’s the private Chopin that will be remembered, his loves and shared friendships, in the peaceful Berrichon countryside that reminded him so much of his beloved Mazovia in Poland.

Chopin and Sand met in Paris on an autumn evening in 1836, at the home of Franz Liszt and Marie d’Agoult. Sand—born Aurore Dupin—was the divorced mother of two children, already an acclaimed writer under her masculine pen name and a free spirit whose many liaisons included a tempestuous affair with writer and poet Alfred de Musset. Chopin, born in Poland, the son of a French expatriate father and a Polish mother, was as slender and pale as Sand was tiny and dark. He was 26 years old, she was 32.

“What an unpleasant woman,” he commented to a friend. The seductress both attracted and frightened him. There was a lot of “yes, no, yes, but…” Sand would say, before they became lovers. After a trip to Majorca with Sand’s children, Maurice and Solange, during which the weather was terrible and Chopin, who had tuberculosis, coughed uncontrollably, they retreated to the Berry and Nohant.

Sand happily returned to her childhood home, which she had inherited from her grandmother, Aurore de Saxe, and which had become her refuge since the separation from her husband Casimir, the Baron Dudevant. “Chopin, who didn’t really like the country, preferring Paris, lived there as if in a cocoon, a loving, maternal cocoon woven by George, until their breakup,” says musicologist Jean-Yves Patte.

Although it is often referred to as a château, Nohant is really a country manor house, built in the late 18th century and now a museum. In the elegant dining room, with its pale gray boiseries and Venetian chandelier, visitors can still see the blue and amber glassware that was a gift from Chopin to Sand; Listz, Flaubert, Balzac, Delacroix and Turgenev were among the guests who once dined in this room.

In the salon, Louis XVI chairs surround a famous oval table the village carpenter built from a wild cherry tree that once stood in the garden. “It lent its back to so many things,” wrote Sand, “wild or ingenious writings, charming drawings or disheveled caricatures, models of all sorts.”

On the walls hang portraits of Sand’s ancestors—Aurore de Koenigsmark and her son, the Maréchal de Saxe, and the Dupin de Francueil family—along with her own portrait by Auguste Charpentier. A staircase with a wooden handrail leads to the second floor and Chopin’s rooms, which were at the time decorated with wallpaper in red and blue Chinese motifs. Sand used to call him Chip-Chip, Chopinet, Chopinski or mon cher enfant; he called her Aurore.

They led an almost conjugal existence and worked a great deal of the time. He composed his most accomplished works—first one, then two pianos were put at his disposal by the famed manufacturer Pleyel—and she wrote, mostly at night, producing Consuelo, Le Meunier d’Angibault and La Mare au Diable. Houseguests were served breakfast in their rooms, and then left on their own much of the time. At 5 pm, a bell summoned everyone to the salon. Chopin was not always the somber, melancholy exile so often described. Caustic and incisive, he could also do uproariously funny imitations. When his failing health permitted, and when he was in a good mood, he would willingly improvise on the piano or accompany the singer Pauline Viardot. Perched on a donkey, he would also join a picnic excursion to the banks of the Indre River in the Creuse. But when displeased with someone or something he became surly and went off by himself. He was obsessed by perfection.

Rarely since Sand’s day have the house and gardens at Nohant seemed as lively with visitors as they do today. The library-bookshop has become a stimulating cultural center and meeting place with its Grenier Littéraire. Avid readers can find Sand’s own novels (reprinted by Paléo, a publisher in Clermont-Ferrand), correspondence, critical reviews and accounts of the celebrated people who were entertained here, including a great many of Europe’s most important literary and political figures—the Nohant bookshop sells some 17,000 works a year.

Enthusiast Georges Buisson, the administrator of Nohant, has set up an auditorium; increased acquisitions, including a view of the château’s park by Delacroix; and is welcoming artists in residence. “What is astonishing,” says Buisson while showing the restored atelier of Sand’s son Maurice, “is the wide range of passionate interests the family had.” Sand’s family and friends were interested in pantomime, botany, geology, numismatics, painting and, of course, music. One of the favorite entertainments at Nohant, in the years after Chopin, was the marionette theater, installed in a small ground-floor room in the château, with a whole cast of commedia dell’arte marionettes, most of them carved by Maurice and costumed by Sand herself, who also did scenery and scripts. Some 150 marionettes remain in the château’s permanent collection of memorabilia.

Concert pianist Yves Henry, the artistic director of the Nohant Festival, has undertaken the lengthy task of recording all of Chopin’s works—especially interesting is his performance of the 24 Preludes (Op. 28) on a Pleyel piano of Chopin’s era. “He was an alchemist of sound,” says Henry. “On the piano Chopin invented an orchestral universe that belonged only to him. The breakup with Sand weakened his health and broke the thread of his creation.”

Still today, Chopinistes and Sandistes square off about the causes of that breakup. Did Chopin fall in love with Sand’s daughter Solange? In taking the part of the daughter against the mother did he betray George? The 18-year-old Solange was ungovernable. Despite Chopin’s warnings, her mother pushed her into the arms of Auguste Clésinger, a talented sculptor but a bad choice for a son-in-law. “Nohant soon exploded with the drama,” recounts Jean-Yves Patte. “Clésinger demanded money, voices were raised, slaps were exchanged, then punches, someone brandished a hammer. The newlyweds were chased out. It was a huge scandal. Sand announced to Chopin that if he wanted to see her again, he must never mention Solange’s name.”

On July 28, 1847 she wrote to him: “Goodbye, my friend. May you soon be cured of all your ills, as I hope that now you may be…. If you are, I will offer thanks to God for this fantastic ending of a friendship which has, for nine years, absorbed both of us. Send me your news from time to time. It is useless to think that things can ever again be the same between us…”

Chopin died two years later, on October 17, 1849, in Paris. Sand continued to write, shared her life with the engraver Alexandre Manceau for 15 years until his death in 1865, and spent her last years with her grandchildren at Nohant. She died June 8, 1876, and is buried in the family cemetery on the grounds of the château.