“I Don’t Look Back”: An Interview with Juliette Binoche 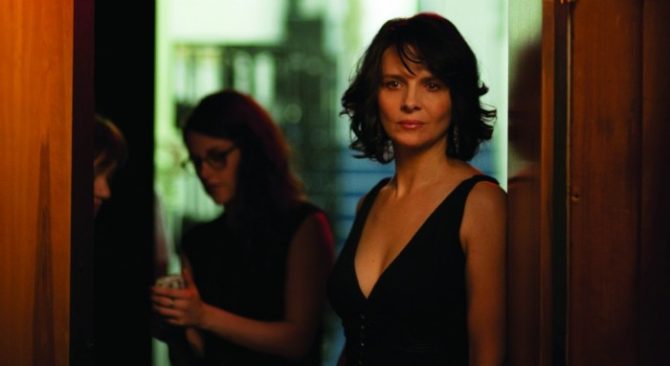 Throughout her career, Juliette Binoche has been known for her radiant beauty, but also as an actress who enjoys taking risks. To prepare for roles, she’s galloped through the hills of Provence, parachuted from dizzying heights, water-skied on the icy Seine during the dead of winter, slept on Parisian bridges, and mastered the complex rhythms of the tango and African dances. At the age of 50, the award-winning French actress is still the first to admit that jumping into unknown territory is one of the best parts of her job.

“I don’t like to repeat myself,” she says. “That’s what’s exciting for an actor – how to go into the new, to reinvent something in yourself through a different story. Otherwise, it feels like death to me.”

France Today’s audience with Binoche takes place in a stuffy, black-walled nightclub atop one of Cannes’ seafront hotels, which has been transformed into a makeshift daytime interview space during the International  Film Festival. Even in this dim light, the luminosity of Binoche’s skin is disconcerting…

Her latest role, in the film Clouds of Sils Maria, began as a passing idea. Two years ago, a longtime friend, director Olivier Assayas, phoned the actress to discuss his desire to write an original screenplay specifically for ‘la Binoche’, as she’s affectionately called in France. The part required Binoche to play a renowned glamorous 40-something actress named Maria Enders whose character, in some ways, seemed to parallel her own career. But once she’d read the script, the actress says that she didn’t always feel in sync with this intimate portrait of an ageing star.

“Of course, I could relate to her strongly,” she says. “But in the film, my character, Maria, has a big fear of change. She’s hanging onto the success she’d had before. I’m not like that.”

Much of Clouds of Sils Maria, which opens in the US in early 2015, takes place in the Swiss Alps. Maria is holed up there, rehearsing for an upcoming role, a revival of a dramatic play, The Majola Snake, that she starred in years ago. But there’s one major difference – she can no longer play the character of her youth, and has to settle for the role as ‘the older woman’ in the drama.

The English-language film also deals with the intense relationship between the egocentric yet vulnerable Maria and her harried personal assistant, Val. In the opening scene, Val, who’s brilliantly portrayed by a bespectacled Kristen Stewart, is clearly stressed out. As their train snakes up a winding mountain route, Val is juggling cell phones, trying to deal with the barrage of undesirable media and pestering directors. It’s her job to arrange Maria’s schedule, from getting her to Chanel gown fittings  on time to endlessly walking the actress through her script.

“I don’t have a personal assistant right now,” Binoche says, “but I had the same personal assistant, Lina, for 16 years and I definitely understand the dynamic. We’re very close, almost like sisters, and have gone through so many things together. The difference is that I never had such a co-dependent relationship.”

Not only did the two actresses bond on-set, but Binoche says that she picked up tips from Stewart, who shared her own megastar experience from the days of Twilight, the hugely successful television and film franchise.

“Kristen knew more details about a certain things than I do, in a way, because she’s really in the world of paparazzi. She suggested things – like you should always lock the door before you’re about to walk up the red carpet, in case your dress is totally open or something is wrong,” Binoche says, with a laugh. “Your personal assistant has to check everything first. During rehearsal, when I opened the car door and started to get out, Kristen said, ‘What are you doing? A star would never do that!’”

For her part, Stewart later says that, “The reason this movie was made was not to make a statement about how superficial media can be, but it was a lot of fun for me to be the one to say it. Obviously, I’ve had more experience with the media, so it makes it funnier.”

At one crucial point in the film, Binoche’s character becomes increasingly worried that her co-star in the play – sexy, young, tabloid-baiting starlet Jo-Ann Ellis (Chloë Grace Moretz) – may steal her thunder.

“You can’t be as accomplished an actress as you are and still hold onto the privileges of youth,” Val bluntly tells Maria on screen.

How does Binoche feel about the choices she’s needed to make in her own career, given the film industry’s hunger for fresh new faces? The actress takes a sip of her tea and leans over confidingly…

“Feeling insecurity is what life is about,” she says. “You always have moments of uncertainty as an actor. It’s part of learning to let go. You can’t attach yourself to anything.

“I sometimes feel in competition with other actresses, but they’re from my own generation – not the younger ones – because we all want to play the same roles, but I have beautiful relationships with a lot of older actresses, like Jeanne Moreau.

“I don’t look back,” she adds, with a smile. “I rarely watch my own films – only when I have to. I can be melancholic, but not about the films I’ve made in the past. What’s done is done.”

That’s as may be, but the list of international heavyweight directors in her filmography is exemplary for a French actress. Binoche has worked with the likes of Jean-Luc Godard, Leos Carax, Louis Malle, Philip Kaufman, Krzysztof Kiéslowski, Hou Hsiao-Hsien, Abel Ferrara, Lasse Halströmn and Michaël Haneke. She’s also scooped up numerous prestigious prizes along the way, including Cannes’ Best Actress gong for Abbas Kurastami’s Certified Copy (2010), and an Oscar for Best Supporting Actress in Anthony Minghella’s The English Patient (1996).

However, teaming up with Olivier Assayas for Clouds of Sils Maria was in some ways remininscent of her debut role, at the age of 19, when she first arrived in Paris from the provinces.

“My starting point in this film was Juliette,” says director Assayas. “We’ve known each other for ages, ever since she starred in Rendezvous, the film that launched her career, which I co-wrote with André Techiné in 1985.

“We had a common history, and those roots in the past seemed more interesting than any fiction. I wanted to explore how she, like any actress, has had to reinvent herself during her career, to accept what time does and how it transforms her, for good and for bad. It’s also about how you deal with the times that are changing.”

These days, one of those changes might include branding and maintaining an image on the internet. In the film, when Maria wants to learn more about her young rival, she consults a YouTube clip of a talk show where Jo-Ann Ellis is the invited guest. Predictably, she is  appalled. But Val tells Maria that she shouldn’t judge the straight-out-of-rehab young actress so harshly.

“Today, movie stardom and recognition goes through different channels,” Assayas explains. “You have to deal with the internet when you’re an actress. It’s another planet – part you and not exactly you – you are an avatar. Every young actress is aware of that.”

Upon the subject, Binoche shrugs and says, “I don’t use Facebook or Twitter or Instagram. One difference between generations that I experienced – and it’s also in the film – is the different way we use the internet. Kristen and Chloë were always in contact with a bunch of friends on their iPhones. They showed me things and tried to get me into it, but I don’t think I could live that life. I’d feel too claustrophobic. Of course, I occasionally Google people when I need some information – it’s very useful. I also love to see what the fans are saying about me sometimes.”

By the same token, Binoche didn’t feel as if she was expected to be the role model on set.

“I didn’t have to teach them anything,” she says. “Working with younger actresses doesn’t always mean they are less experienced. Kristen started acting when she was ten years old, and Chloë, at seven. They both have their own technique, their own way of dealing with emotions.”

Despite what was written in the script, there also were moments during the shoot when improvisation took over.

“Olivier Assayas allowed us a lot of freedom,” Binoche says, with genuine warmth. “He’d give structure to the scenes or a few indications, but let us be ourselves.”

What was the most striking aspect of Maria’s career that clashed with her own?

“In my life, I can’t allow myself the luxury of going to the Alps and rehearsing with a personal assistant,” Binoche says, laughing. “I have children, so I prep or rehearse while they’re at school. If I have to travel, I try to take them with me whenever possible.”

Happily, the next 12 months will bring Juliette Binoche a little closer to home than even the Clouds of Sils Maria shoot and, paralleling that film’s subject matter, it will also see her return to the stage. The actress is due to star in an English-language adaptation of Sophocles’ Antigone at London’s Barbican in March 2015.

Binoche pauses, finishing her tea, then sets the cup down with a resolute clink.

“You know, sometimes, the director wants to have all the control,” she muses. “You have to stand up for what you believe in, and say ‘no, I want to do another take’.”

Then she laughs loudly – a deep infectious guffaw.

“And now that I’ve been working in film for 30 years, there’s finally a little respect!”

The film Clouds of Sils Maria is set in the Swiss Alpine village of Sils Maria, in the Engadine Valley. The area boasts singular atmospheric conditions that result in a long, sinuous cloud formation known as ‘the Majola snake’, which winds through the alpine valleys.

The Majola Snake is the title of the play that Juliette Binoche’s character is asked to revive in the film.